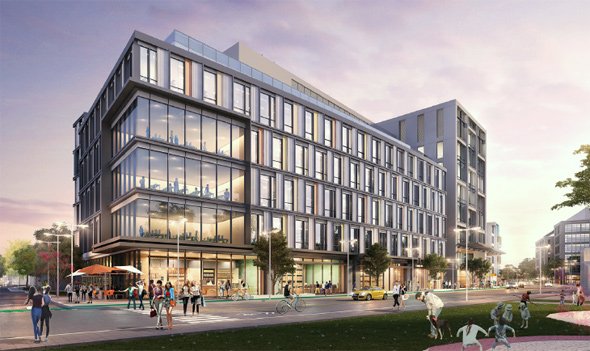 Developers Stephen Lynch and Thomas Ragno's King Street Properties has filed detailed plans for the Nexus at the Allston Innovation Corridor project for 4.3 acres of land along Western Avenue in Allston that now houses Stadium Auto Body, a diner, a sub shop, truck parking lots and a few houses.

The developers say the three-building complex will be aimed at startups working to cure diseases, which they say will "provide local jobs at all education and skill levels." King Street is partnering with the DiStefano family - which has owned the land for more than 50 years - and Mugar Enterprises.

The land is on the edge of Harvard's Allston properties, on which the university is planning its own large R&D campus.

Among the project's proposed benefits: A reduction of curb cuts from 20 to just 3. And none will be on Western Avenue, which will help traffic on the increasingly busy street, King Street says.

King Street will also build 40 units of housing, room for a restaurant and retail space in each of the buildings, protected bike lanes along Western Avenue and a small park they hope to stock with outdoor art by Allston artists. The beginning of the end for allston.

I lived in Allston from 1984 to 1991. As long as they don't destroy the Harvard Ave business district and all it's lovely charm, Allston will be OK. The area where this stuff is being proposed is under-utilized. This will be a nice addition.

I lived in Lower Allston 20 years until last year and I can tell you Allston is not "just" Harvard Ave. You left in 1991 so how would you know how the Western Ave area is currently used?

You left in 1991 so how would you know how the Western Ave area is currently used?

Hmmm.... Stadium Auto Body was there in 1991. So was the Bus Stop Pub. The Breakfast Club was just a different diner. I don't think how Western Ave here is used has changed in any way since 1991...

Most of the homes have manicured properties and a sense of strong community that makes it comfortable.

the crumbling of the common ground (ale house) was just the beginning. that street will be converted to something generic eventually. i guarantee they will take the funk out of allston. maybe they can make it a baby newbury street?

I don't know, Harvard seems barreling towards it's future designation as k-town ---- having a strong ethnic connection makes it a destination place without generifying it to whitebread newbury, so it might be fine.

are actually needed. Are they planning on sticking them all in 'less desirable' neighborhoods, cities and towns?

You definitely can’t find auto body shops, diners, sub shops (begins laughing uncontrollably) or truck parking lots (hahahahahahahaha) anywhere else in Boston. Have you ever been to [insert any neighborhood you like]? Droll.

Stadium has a fleet of tow trucks that have terrorized Allston car owners for 3 decades.
Unrelated- if these developers could fire-bomb those trucks on their way out that'd be greeeeeeaaaaat.

If only there were other auto

If only there were other auto body shops nearby...

These guys are incompetent assholes, FWIW.

Also, some of the other area shops are located just over the pike in the Rugg Rd area, which is also quickly being developed. I wouldn't count on them all sticking around for too long.

Now they know exactly where to put the next 11 biotech buildings!

The type of people who will

The type of people who will be moving in don't have any use for those businesses. And the people who do, are getting priced out.

Yeah, those newcomers have no

Yeah, those newcomers have no use for places that repair cars. Or truck parking lots. Or that giant soda machine graveyard. Not like all the longtime residents who are getting priced out (or are getting rich if they own the place).

Is anyone else tired of these overplayed window designs that look like a boring version of a Mondrian?

Don't You Forget About Me

I guess this is so long to the Breakfast Club, one of my favorite diners in the area?

But, looking at the plans, at least Hondaa/Oriental Car King might survive at least for a few more years (unless there are concurrent plans by someone else to also develop that part of the block, too).

Honda is VERY litigious if you use that name on your business. "Hondaa" cracks me up. I used to take my Honda to "Hondar House" in Cambridge(?). Same thing. Generic shop that specializes in the brand name they cannot say.

I think they had to change "Hondaa"

They now go by Oriental Car King rather than Hondaa King but I still call them Hondaa King..same folks.

I hope they survive as I've been using them since I got my first car in 2000.

What a shame. I enjoyed many a fine omelette there when I was in the area more regularly. As you walk on by, will you call my name? Or will you walk away?

more expensive R&D for overpriced shit that won't keep us from dying anyway.

could't they just as easily do this in some remote area of Montana? Leave me the goddamn option to get my car repaired or a sandwich made by real people

Has plenty of sub shops and garages, just FYI.

I suspect you're not really

I suspect you're not really serious, but no they definitely could not do this just as easily in some remote area of Montana.

You know what we say over here...

All the new Biotech buildings are starting to feel like a bubble....anyone keeping an eye on this? And lab space is so much more expensive to build compared to office space (double or triple the cost due to inftastructure) it's an expensive bet!

You're right, but the revenue

You're right, but the revenue they get is also way higher. I work in One Kendall, and Alexandria are not only building more lab space, but converting existing office space to labs.

I'm a scientist, not a finance person, but I don't think it's a bubble (yet?). There's an extraordinary amount of really promising science happening right now, and there's tons of money flowing from VC firms and other investors. A lot of startups and small companies are getting pushed out of town because there just isn't a lot of* lab space in Boston/Cambridge at any price, and what is available is very very expensive. I feel like the developers are bound to overshoot demand at some point, but for right now we could really use the lab space.

What's the next step on this?

I will stand on my head to make sure that diner does not get demolished or scrapped.

Since (rightfully) a lot of

Since (rightfully) a lot of these new buildings are getting first floor retail including restaurants, I wonder if there'd be a way to get them space in the new building? I bet they'd crush it. If there were a good diner in the ground floor of my building they'd probably get like 25% of my paycheck.