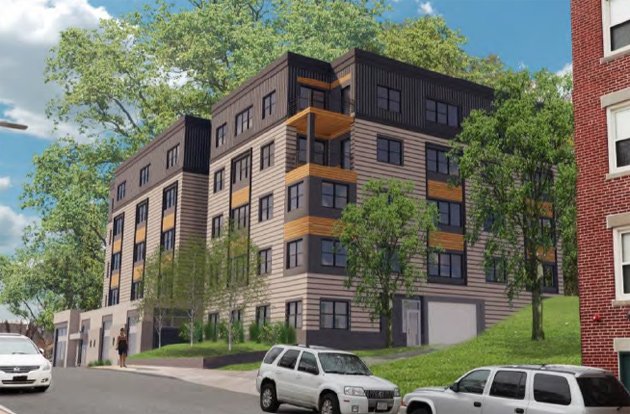 A developer is proposing 51 condos on a vacant lot between Regent and Fountain streets that the city cleared for urban renewal in the 1960s and then never did anything with.

In a filing with the BPDA, developer Kevin McGuire of the Back Bay is proposing a four-story, 42-unit building on Fountain Street and a three-story, nine-unit building on Regent Street. McGuire's proposal calls for 26 of the units to be deed restricted to people making no more than the Boston area median income.

McGuire is proposing 41 parking spaces, roughly half in an underground garage, the rest in a parking lot. The proposal would also allow roughly 10 on-street parking spaces on the two streets, which are about a half mile from Dudley Square.

The land was once part of the then BRA's Washington Park urban-renewal area, created in 1963. The city tore down existing homes on the land but never replaced them - although it left the stone steps leading up to at least one of the no longer standing houses. In 1988, the BRA sold the parcel to developers, who built the Fountain Hill Square condos, but who left roughly 8/10's of an acre vacant. Last year, McGuire bought that land for $950,000.

In addition to the BPDA, the zoning board will also have to approve the project. Because the land sits in an official urban-renewal district, the City Council could also require a hearing. Mystical Boston neighborhood re-emerges from the mists of time, at least on some online maps
Peaceful Breonna Taylor march from Nubian Square to downtown ends peacefully
Brigham and Women's says 28 people have now tested positive in coronavirus outbreak on two floors
Condos proposed for Hawthorne Street in Roxbury, in project that would preserve and reuse historic neighboring church
Walsh asks for peaceful protests, cautions National Guard will 'be around' just in case
Firefighter injured at fire on Rockland Street in Roxbury