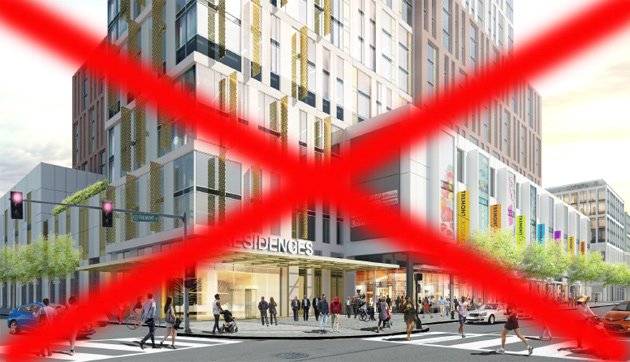 If a mall gets built, somebody else will build it, BPDA says.

The Bay State Banner gets the scoop: BPDA Director Brian Golden says his agency won't renew a Roxbury group's development rights to a seven-acre parcel on Tremont Street when they expire at the end of the month, 12 years after it first proposed a large multi-use complex with residential towers, a mall, office space and a museum.

This past February, P-3 Partners - a joint venture between the local Elma Lewis Partners and an actual development company - which won development rights to the land left over from the failed I-95 project in the early 1970s, told city officials that it and its development partner planned to close the next month on the final $28 million in financing they needed for the proposed Tremont Crossing and that construction would start in April. Two construction companies, including the Roxbury-based Janey Construction, were signed and ready to start work.

The latest plans included more than 700 residential units, a mall featuring a BJs, a Burlington store, a rock-climbing place and a movie theater, office space and a new, $13-million home for the National Center for Afro-American Artists.

But aside from chopping down all the trees that had grown up on the parcel since state highway officials were forced to give up their dream of ramming a highway through the area, the land has remained vacant and unbuilt on.

Golden cited the lack of definite financial commitments for the project, the Banner reports.

This is not the first time the BPDA or the BRA has threatened to cancel P-3's development rights for missing one deadline after another. In fact, the BRA moved to do that in 2009, but after an outcry from Roxbury, agreed with Mayor Tom Menino to give the venture 18 more months.

The BRA then kept granting P-3 one extension after another.

They were just getting their finances together too...

Throw in the towel and let some biotech company build lab space there. That’s the most valuable use of the parcel.

Northeastern could put in a bid.

But biotech lab space and manufacturing, that’s in a critical shortage right now. And those jobs pay more than retail.

Maybe not the best place for it?

I would think that such space would be cheaper to buy/build further out.

One of the reasons biotech lab space is still being built at frankly ridiculous prices in Kendall Square is that the workers biotechs need mostly don't want to work out in the suburbs, and they can afford to be choosy. New biotech facilities that are not easily T and bike accessible face stiff challenges in recruiting and retention.

This is very true

Biogen bought a big campus in Waltham and built their world HQ there with multiple nice buildings and lots of space and amenities. Even shuttle busses with wifi to Cambridge and transit stops.

Then they learned that the recruits they were chasing refused to commute to Waltham. Same for executive leadership (barring those that had big suburban mansions)

I think the main issue is that the heavily sought after people they need really want to live in the city and they do not like the idea of a commute out to the 'burbs for work.

But on the flip side there are biotechs who are leaving Kendall Square because staff hate the horrific commute into Kendall. People are willing to deal with 95 and 128 traffic because at least it's "easy" traffic rather than fighting in the city to get through congested intersections or make a left turn against oncoming traffic etc.

In Roslindale the commute to a suburban biotech is about the same time as it takes to get to kendall square but I'll take the suburban location any day rather than fight to get from here across the river into cambridge.

Tell us how you would feel about commuting to Ruggles.

Biotech is a frothy bubble, plus the workers do very little for the surrounding neighborhood. Kendall sucks despite decades of being packed with rich biotech workers because they spend no time in the neighborhood and don't care about it even a little bit. If it's not a yupster bar, bakery, or coffee shop, it may as well not exist to them.

Roxbury would not benefit from essentially donating this parcel to become an outpost of Kendall and Seaport.

Biotech is a frothy bubble

That sounds like a comment from someone who plunked down some hard cash on an early-stage Bio stock that didn't do well -- i.e. the proposed drug up and failed in the Stage III Clinical Trials -- remnants of the company IP sold for a few cents on the dollar.

Fundamentally there is one overriding reason why the Froth that is Bio will be around for quite awhile --- Baby Boomers -- and specifically that those that think that 70 is the new 50, etc.

As a boomer -- I hear my fellow boomers talk incessantly on living not just long -- but living well -- and that means not just exercise machines and personal trainers but Bio / Pharma and e-wellness, etc.

Eventually some of that R&D and Clinical Testing will translate into some approved pharmaceuticals and devices, etc. and then the need for some manufacturing space -- that might be a golden opportunity for Roxbury and Dorchester, East Boston, etc.

The need for Bio/Pharma/ Med Device Manufacturing is the modern incarnation of the way that Big Finance spawned the need for Back Room Operations to process all the paper -- that's gone of course as computers have taken on most of those tasks.

Spoken like someone who has absolutely no idea what was actually in Kendall Square decades ago.

The Technology Review article you linked to says Biogen moved to Kendall in 1983, and CIC opened in 1999.

BFIT's recently selected site along Melnea Cass near Methadone Mile has not been well received. People in the community have been congratulating the BFIT in public tweets while expressing their concerns behind the scenes. Now, this P3 change gives BFIT the perfect opportunity to make a switch before its too late

So who is Elma Lewis Partners?

They've literally squandered YEARS on this during the hottest real estate market in city history. With any kind of effective stewardship, maybe there would be 100s of units of affordable housing right where it's needed, but instead nothing.

So, I'd be curious to know who exactly has been getting paid to get nothing done for a decade plus all in the name of 'the community'. Maybe they're good folks over their head, maybe they're grifters, I'd be interested in which.

This is the question.

I think awarding the development rights was a purely political move by Menino to pacify the black community. Elma Lewis partners couldn’t find its own ass with two hands. No idea what it’s doing and the fact that it couldn’t deliver on a project 75 yards from the T in the greatest development boom in city history says everything you need to know about its expertise in real estate development.

Looks like the good folks over their head is more accurate

The principals of Elma Lewis are Edmund Gaither (respected museum guy), Melissa Nobles (MIT dean) and Margaret Burnham (NE law professor). Given their credentials, I'm going with that these people were well intentioned but not suited to the task or didn't have the time to lead this.

I'd be interested to know why Feldco, a large local developer who partnered with them, was not able to shepherd this through as presumably they would know which palms to cross in the Menino then Walsh administrations.

A basic small one bedroom unit in a high-rise ends up costing well over half million to build once land cost and especially union labor cost is taken into account, are you expecting the developer to take a $200K+ loss on each unit?

Not the way I read it

My reading of this is that Feldco and whomever else were the majority partners couldn't get financing, not Elma Lewis Partners. "Partners" can mean many things.

I defer to your far great knowledge

as a real estate adjacent person.

If feldco couldn’t get financing

It’s because the project elma Lewis partners put together, complete with a super expensive Museum, was not financially viable. Feldco is an experienced developer and could have secured financing for any number of projects in that space. Feldco wasn’t steering this ship into the wind for the last 12 years. That was ELP.

Thanks for the info. I only know what I read in the papers so I defer to you who seems to have more knowledge.

The business owners at Dudley Station are clamoring for new units of housing. Was there opposition to the BJ's? nope.