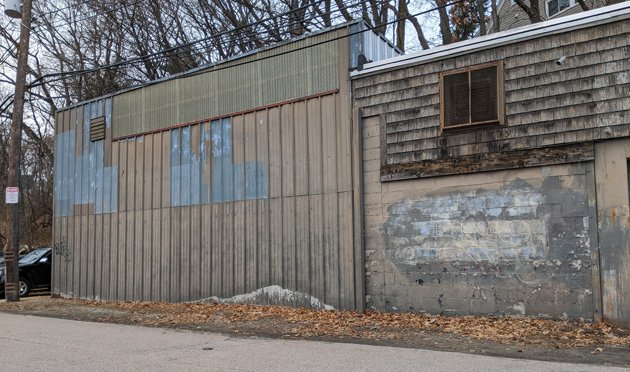 Not much to look at, but the focus of two court decisions now.

The Massachusetts Appeals Court today rejected a woman's attempts to force the city of Boston to let her drive trucks over a tiny, unpaved bit of land to a former fabrication shop on Walnut Street in Hyde Park, because the deed that allegedly gave her real-estate trust ownership of the property was a fake.

At issue is a 5,532-square-foot parcel with a decrepit former metal-fabricating shop on it at 27 Walnut St., just down the street from the Fairmount train station and next to a parcel the city took through foreclosure.

Zarina Braxton, trustee of the Twenty-Seven Walnut Realty Trust, claims that the city had long let former owner Carl Berkowitz and a company he leased the land to to drive trucks over a small part of the neighboring lot and that she should be allowed to permanently be allowed to do that.

The problem, the appeals court concluded today - as a Land Court justice concluded last year - is that the deed Braxton used to press her claim is a forgery and that the actual owners never had any intentions of selling the land to a man who then turned it over to her.

According to the appeals court's summary of the case, Carl Berkowitz had run a shop on the land, retired, then leased the land to another metal fabricator for awhile before that company moved out. Berkowitz died in 2000, followed by his wife, Louise, in 2006. After her death, their sons held onto the land, because selling it would require probating their mother's estate - she had died without a will - and they didn't think they'd recoup the cost of probate by selling the little piece of land and run-down building, currently assessed by the city at $110,600.

In 2016, Donald Kupperstein, a South Easton attorney, filed a deed with the Suffolk County Registry of Deeds for the property, purporting to show a notarized agreement in which one of the sons, Eric Berkowitz, would sell the property to Robert Belcher of Hyde Park. Belcher then signed the land over to Braxton's trust. This came, according to court documents, after Kupperstein, Belcher and one of Belcher's associates tried for years to get Eric Berkowitz to sell the land, including one time when Kupperstein and that associate showed up at Berkowitz's home in Amherst unannounced to try to get him to sell.

In 2017, Braxton's trust, represented by Kupperstein, went to Land Court to force the city to let the trust drive trucks over the small piece of unpaved land, arguing that Berkowitz had done so for so long that he'd essentially won a permanent right to do so - which would pass down to the new owner.

The case did not go well for either the trust or Kupperstein. In a 2018 decision, Land Court Justice Michael Vhay agreed with the city of Boston to dismiss their demand due "lack of standing" to even bring a suit, because Braxton's trust did not own the land. According to the appeals-court summary:

The trust presented a notarized, recorded deed purporting to show a transfer of title to the trust's predecessor in the chain of title, and the city responded with an affidavit from the person who purportedly signed the deed [Eric Berkowitz], denying ever doing so. At trial, after hearing from the notary that the transaction was not in her log book and did not appear to be her work, the judge concluded that the deed in question was forged and therefore void. Moreover, the judge found that the trust's attorney, Donald Kupperstein, was aware that the deed was forged and, in fact, apparently drafted the forged deed himself. The judge issued a judgment in favor of the city, dismissed the plaintiff's complaint with prejudice, declared that the forged deed did not convey title to the property, and ordered that an attested copy of his order be recorded at the registry of deeds.

Vhay ordered the Suffolk County Registry of Deeds to append his ruling to the alleged deed, stating specifically that that document was a forgery and that both the deed and a followup document transferring ownership to Braxton's trust were invalid (he also forwarded a copy of his decision to the state Board of Bar Overseers and the Suffolk County District Attorney's office).

Technically, Braxton's appeal did not focus on these findings but on Vhay's decision to dismiss the suit "with prejudice," meaning she can't try to file an amended complaint.

In its ruling today, the appeals court in essence said: Yeah, right. The court upheld Vhay's decision, agreeing that Braxton can't sue over a piece of land she or her trust do not legally own, and in such an egregious case, the justice had the right to rule that way.

To reach that conclusion, the court first had to give Braxton some leeway to even file the appeal.

In Massachusetts, as in many other states, officers of corporations and trusts normally can't file legal actions on their own - they need to have an attorney do so. Although Kupperstein inititated the Land Court appeal, by the time it got to the appeals court, Braxon was listed as a pro-se appellant. The court said it agreed to hear her case, anyway, in part because court filing deadlines can be tight, but cautioned that normally, corporate or trust officials will have to signal they are looking for a new lawyer rather than continuing pro se.

Lawyer on the Lam Gets Reprieve in Bankruptcy Case, for Now.

From the current story:

Moreover, the judge found [in 2018] that the trust's attorney, Donald Kupperstein, was aware that the deed was forged and, in fact, apparently drafted the forged deed himself.

And now, he's disbarred and in jail, right? Right?

'on the lam' from the 2nd story would indicate no

He's still out there, roaming the earth.

What does the person who claimed to have bought the land need with the access anyways? Can't see what the active use is from Google maps, etc...

Just going by Google maps, it looks like this building is built very close to the lot line, and there is a garage door on the side of the building. I think that a vehicle would probably have to cut across the corner of the neighboring lot in order to get into the garage from the street.

Does he also go by the name Lionel Hutz?

What's that cloud of black smoke

coming from our house?

Let’s hope this will start a new chapter and clean up of Walnut St, it’s a squatters paradise right now and the city isn’t enforcing much of anything. Commuters cram onto the city owned lot and the street is loaded with dead vehicles, chop shops, and trash. Providence St. is in the same condition and the residents of Hyde Park are the ones who get to deal with the squalor every day.

The lettering on the Carrigan

The lettering on the Carrigan van in this streetview is very cool/classic.

Adam, I love these stories

Adam, I love these stories about arcane property matters and court rulings. Mean that sincerely. Such fascinating insight into the seemingly mundane but stuff that affects people's everyday lives. Thank you.

Speaking as a real estate agent who listed properties on Walnut... all my deals fell apart due to the environmental 21E regs.

For anyone wondering why the rehab fairy skips certain areas. The risk is quite high.

You don't want to live in these areas that are saturated with toxics that rot your brain and give you cancer.

This illustrates two problems with our legal system:

It's far too easy to forge a deed, which is a huge hidden risk for all future owners of the property. Why haven't we figured out an efficient mechanism to catch this stuff as it happens?

And the costs of probate being higher than the value of the land, so it just sits there derelict forever rather than being sold, is a good way to ruin someone's inheritance and perpetuate blight in the neighborhood at the same time.