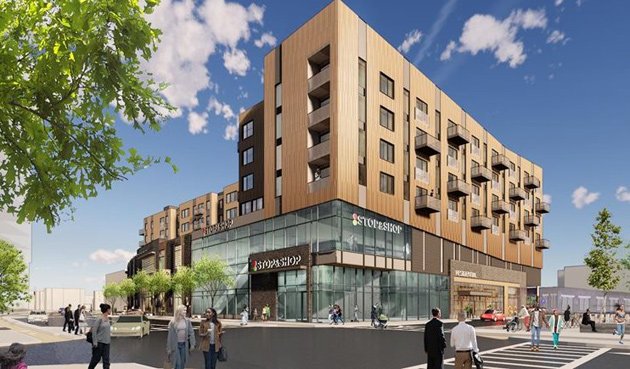 Architect's rendering of one of the proposed buildings.

The BPDA board yesterday approved plans by Stop & Shop to transform its 10.6-acre parcel on Everett Street in Allston into an 868-unit complex with apartments, condos and a replacement for the supermarket that now sits there.

The board rejected requests from residents to delay a vote to allow for more public discussion of the proposal. In what could be one of his last public statements, outgoing City Councilor Mark Ciommo said it was time to build.

Part of the proposal calls for a $4-million contribution to the Allston Brighton Homeowner Fund, which is aimed at helping residents stay in the neighborhood even as it is transformed into a sea of market-rate and luxury units. Some 148 of the new units in the complex will be rented or sold as affordable.

The proposal also calls for office space, a restaurant and a 10,000-square-foot "community art space."

Thankfully, this now moves forward. At this point, all the remaining complaints are just the usual NIMBY stuff we see everywhere. This is an excellent and needed project that went through over two years of review and changes. It bodes well that Ciommo said it's time to move forward, and should be a cautionary tale for everyone that the incoming Councilor Liz Breadon has been one of the biggest opponents of this project. Hopefully she will represent everyone in the two neighborhoods and not just the loud NIMBYs who dominate these meetings and are mostly homeowners not concerned about rising housing costs for everyone else. All the progressives out there who think more housing is needed should know that Councilor Wu also wrote a letter of opposition to the BPDA about this project which is public record.

Call them what you want, but

The people you disparage are the ones who got the the amount of open space doubled, and insisted there be an easement to ensure that it stayed that way. The developers wanted to reserve the right to build over it in the future. Neighbors also successfully fought to include ownership units. Not enough, but better. (The Walsh administration has made it clear that they prefer rental housing in Allston Brighton, so it's always a fight.) They also wanted a higher percentage of affordable units, and some real specifics about the "Homeowner Fund." What it was going to be used for, how the decisions would be made, and by who. The delays were often because Stop & Shop would just stop, and not make a move. The city would take its time in scheduling meetings. Mark Ciommo? He voted against the 2% tax on real estate sales over 2 million dollars. He never took the lead on any housing issue in 12 years. Liz Breadon won with close to 60% of the vote, despite being heavily outspent.

Why do all of these places

Why do all of these places remind me of
https://en.m.wikipedia.org/wiki/The_Pruitt-Igoe_Myth

This is a far cry from Pruitt-Igoe

If i use my stop & shop card, do I get a discount to market-rate rents?

If I don't use my stop & shop card, do I get regular over-inflated rental rates?

No, but you’ll get useless

No, but you’ll get useless gas points for discounts to fill up the car you don’t have since you live above Stop & Shop!

It's nice that Mark Ciommo is getting in most developers good graces right in time for him to enter the private sector.

His most recent gifts to the areas he "represented" were an overwhelming amount of development without public infrastructure and gigantic lighted billboards in residential neighborhoods.

Great to see this much housing coming up, especially since it's transit friendly.

Historian Lizabeth Cohen from Harvard just published a new book, Saving America's Cities: Ed Logue and the Struggle to Renew Urban America in the Suburban Age. Logue was an urban planner in Boston during the early days of the BRA, brought in from New Haven by Mayor Collins as a gesture of public good will after the disastrous razing of the West End.
Logue's record is mixed, though probably not too shabby in retrospect, given that it was the Moses era.

Anyway, he considered the North Harvard-Western Ave-Lower Allston area his big failure. Frankly, his plans for the area pretty much sucked, and weren't terribly different from the West End, though instead of ripping down tenements, the Lower Allston plans involved ripping out privately owned, modest single families and a few three deckers in order to build luxury housing with a garage for tenants. Homeowners balked, and eventually Mayor Collins backed down.

Still, the properties were designated "blight," seized by imminent domain, and demolished, but they were replaced by an affordable housing initiative and an assortment of city utility spaces.

Um, "imminent" is when something is about to happen real soon now...

The phrase you want is "eminent domain".

This would be cool

If "affordable" didn't imply "compared to the rest of the housing market in Boston."

nail in the coffin for the best rehearsal space boston ever had. Musicians and artists out! Condos in!

Does this tear down existing buildings

besides the Stop & Shop itself?

Studio 52 announced they're moving to Allston Village a few months ago, to the self-storage building behind Mr. Music: https://www.universalhub.com/2019/allston-recording-studios-move-harvard...