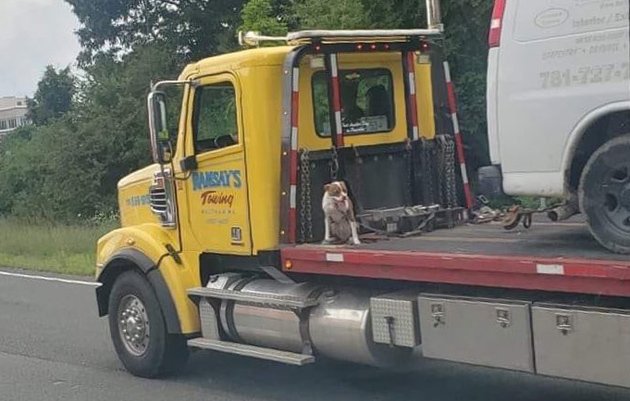 WCVB reports the owner of a tow company has fired the driver reported by several motorists to State Police for driving down Rte. 128 southbound in Waltham with a dog chained on the back platform of his flatbed truck. The dog was not injured.

i hope that dog is not allowed to stay with its owner after this. it deserves someone who actually cares for its safety.

Nice, wonder what'll happen to the dog if it's unemployed owner can't afford it.

Hopefully, the dog will be rehomed anyway

If this is the level of concern for the dog's welfare by the employed owner, probably better if it is given a new home with someone who takes care of it.

As for "unemployed", well, that won't last long. Given the extreme wage fixing for truck drivers, there are plenty of openings. Place in West Springfield has at least one ...

You're assuming a good

You're assuming a good outcome. What if . . . ? You forget the law of unintended consequences.

the ass driver was relieved of his duties?

Yes. Because he WAS fired.

Yes. Because he WAS fired. Do you think this is a conspiracy of some sort?

thing is, I do not agree with this endangering of the dog. however, the optics of this are probably worse than the reality, not that I think the reality should be permitted. i find the punishment of the driver a bit severe, considering this was not torture of the animal. we don't know all the facts, but it is entirely possible that the driver loves this animal and was not trying to put him in a situation where he would be harmed.

let's be real for a minute: most motorists do not have a their canine seat-belted in within their vehicle.

in terms of this animal riding on the flat platform of the truck, no, I don't think it's good, but I also remember as a kid in the suburbs, it was extremely common to see a pickup truck on the highway with dogs in the bed of the truck. I don't think that's good either, but it was quite common. this does not appear to be a lot different from that.

not sure the guy needed to be fired over it, but maybe they know more facts about him that would mitigate against merely instructing him about what it's like to live in 2019.

That back in the day kids used to ride in the back of pickup trucks too.

This isn't a pickup truck

This is a flat bed. Big difference.

absolutely not a big difference lol. unless may you are an untethered beach ball instead of a mammal with legs. to be clear: one is NOT safer than the other

Without even doing the math or physics on it....

when you're talking about soft tissue of mammals it isn't. what is the splitting hairs here for beyond some kind of compulsion to feel like you're right?

yeah okay you win, i see your point.

Thanks for playing, grandpa.

Yeah, I'd like to hear the details of "why"

In the end, it's a bad decision. However, how did this come to happen? Does the dog normally ride up front, but because the truck was towing someone, did that driver need to sit in the passenger seat? (There IS clearly someone in the passenger seat in the photo.) I bet that driver loves that dog and would not do something that he felt was putting the dog in danger. (I have no proof of this, it's just my gut feeling.)

He should have installed a dog cage

not just chain him. He could have lost his balance and choked to death.

He should have left the dog

He should have left the dog at home. This isn't the only hazard this dog would face tagging along with a towing operation like this.

Yesterday was a rather hot day, and the dog couldn't stay in the truck while loading, for starters. How was it that the dog didn't run into traffic or get under or in the way of the operation of the truck? It isn't a place for critters.

Air conditioning much? The

Air conditioning much? The truck is running while loading as you put it.

Some things aren't always how they seem

While I think the guy made a poor decision that could have cost the dogs life or injure the pup. There are many reasons people take their dogs to their jobs with them. Whether they assist in some way or are just comfort pets I've seen many people with their dogs on jobs. Every dog is different to answer your run away comment. My pup is very well trained or maybe I'm just lucky but he never leaves my husband's or my side when we're outside without a lease. He also knows better than to run into the road unless we instruct him. As for the heat the pup definitely should have been kept in the cab with the AC on. Sorry if I'm coming off preachy just wanted to comment on how many possibilities there could be.

Thank you to all the motorists who called and reported this.

No thank you to those that snapped photos

You know this, how?

I got some spectacular lightning photos and flooding photos yesterday and didn't even touch my phone or a camera the entire time.

The dash cam caught some nice video and my husband took pictures with his phone, sometimes through the roof hole before the rain started.

If you didn't know what you were looking at, you might think they were from the driver's seat, too.

Well it wasn't the passenger snapping a photo

Which is usually the common deflection, unless of course they were holding it up near the rear-view mirror, which pretty unsafe too because it'd block the drivers view.

I've seen a lot of dashcam footage thanks to reddit.com/r/IdiotsInCars and I gotta say, I've yet to see one slightly aimed at the side of the road vs. looking forward. It could be a crop of a wider angle view but it just doesn't seem as distorted as it would be.

Sure, could be a dashcam. But come on, its probably the driver operating their cell phone.

And you point is? This guy

And you point is? This guy may have saved this dog's life. But you hate cars and driver's and expect 100% adherence to the rules of the road at all times, even if it means ignoring a potentially lethal situation. And you expect all this even after admitting you run red lights on your toy bicycle. Hypocrisy is fun!

Swing and a miss

I hate dangerous driving that puts others at risk, how can you misunderstand that? I've said plenty of times that I love cars, I just hate designing our communities solely around them and the ambivalence some have to the dangers they pose.

I mean is really outta line to expect drivers to pay attention when driving such dangerous vehicles? As you said I ride a toy, what danger does that pose?

So really it's a bigger argument about car-centeic laws that yes, I break in circumstances when it makes riding safer for me because again, cars are dangerous. Oh and the laws really don't reflect the nuance of say, the dangers a bike vs a car poses.

Hell you could argue that a hands free phone call to the police with details of the truck and plate number is far more useful than a photo. Could even go further to question the need for a photo, other than say social media likes.

Bottom line, we should stop expecting the laws we write for cars to apply exactly the same to bikes. But also, we shouldn't be doing mental gymnastics like your self to justify distracted driving. Go ahead and tell me that it's just as dangerous as a bike doing an Idaho stop.

I freely admit that I do illegal things that pose no threat to others, I can see that same attitude being applied to drivers that use their phones because there's no enforcement and no laws with teeth against it. The difference though? A couple tons of metal and a light toy.

Picked up a tow

The tow probably had a dog..I've known tow trucks to leave humans on the side of the road in god knows because of not enough seat belts in the truck...it seems like a poor best attempt at not leaving the dog behind.

if that were the case...

the driver should have put his dog in the car on the flatbed with the windows cracked.

i love my dog, but i don't think i should ever bring him to work. i think this should be pretty universal unless you work at a shelter or a vet clinic. otherwise, pets do not belong at work.

Maybe the cars owner took amhard pass on having a dog in his vehicle?

which is precisely why the dog should NOT have been with the tow truck in the first place.

Wow, who owns that company?

That dog's way safer than a

That dog's way safer than a poodle crushed between the air bag and it's driver.
For what tow drivers are paid, he'll probably make out better.

In other Waltham news

Stunner of a sunrise
Physical therapist barred in several states for defrauding insurers moved to the Boston area, where he defrauded insurers, feds say
University that promised 'hands on' learning will have to defend itself in court against lawsuit over coronavirus-related switch to online classes
On target
In thrall to a mall squall, that's all
Revealed: How our new robot overlords will dance on our graves