Court rules prosecutors can't use gun, drugs seized from man outside St. Francis House because police didn't have enough justification to search him 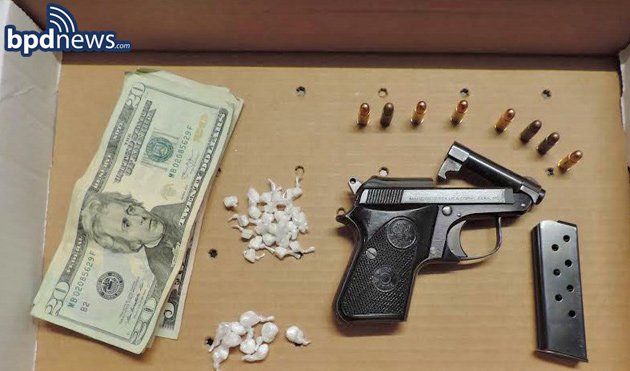 In a 2-1 decision, the Massachusetts Appeals Court ruled today that Suffolk County prosecutors can't use a loaded gun, 9 small bags of heroin and 23 small bags of crack as evidence against Jamal Chin-Clarke on gun and drug charges because Boston police officers didn't have enough evidence he was involved in a criminal act at the time they searched him.

And without a good enough reason to detain and search him, anything they found during that search was unconstitutionally taken, the court said.

Chin-Clarke was arrested after a plainclothes BPD officer who routinely patrols Boylston Street between Washington and Tremont streets noticed three men huddling over a bag of clothes, with their price tags still attached, outside the St. Francis House homeless shelter on the morning of Jan. 27, 2017 and heard one asking "how much is this?" Knowing that people often buy and sell stolen stuff in that area, he went over to have a chat with the three, according to the court's summary of the case.

The man with the bag of clothes couldn't give a straight story - he first said he bought the clothes at the Natick Mall, then, when the officer asked for a receipt said, no, his mother had given him the clothes - and that while this was going on, Chin-Clarke "had his hands in his pockets and was looking up and down the street." The officer ordered him to stand against the wall of St. Francis House, as he continued to question the man with the bag of clothes and then Chin-Clarke, who continued to fidget and gave a false name and said he could not recall his social-security number.

At this point, given the defendant's nervousness and his "sort of bizarre answers to [the officers'] questions," McHugh [the officer] "thought it would be prudent to put him in handcuffs until [they] could kind of sort out what was going on there." As McHugh reached out to handcuff the defendant, the defendant spun around, striking Belgrave [another officer] in the chest and causing all three men to fall to the ground. Two other officers arrived, and together they were able to handcuff the defendant. One officer then pat frisked the defendant and found a loaded firearm, nine bags of heroin, and twenty-three bags of "crack cocaine" in "a fanny pack that . . . had been inside of [the defendant's] pants." The defendant was arrested and transported to the police station where, at booking, one hundred dollars in cash and a cell phone were inventoried.

But in its ruling today, a majority on the court said the officers did not have probable cause to "seize" Chin-Clarke and search him, which means the gun, ammunition and drugs are inadmissible as evidence.

Although the initial officer might have had a case to search the guy with the bag of clothes, Chin-Clarke's nervousness alone was not probable cause to search him - and officers had no proof that he might have known the clothes were purloined, the court concluded.

There were no security devices on the clothes or any other signs of theft. McHugh asked the defendant not one question relating to the clothes -- he did not ask, for instance, whether the defendant knew Noj [the guy with the clothes] or what the defendant was doing there. ... The first question McHugh directed to the defendant was for his identification. As a result, while McHugh may have suspected that "some commerce was going on," he had no specific and articulable facts indicating that it was illegal commerce. ...

There are no other facts giving rise to reasonable suspicion. McHugh did not know either the defendant or Noj. See Barreto, 483 Mass. at 720 (no reasonable suspicion where, among other factors, "neither the defendant nor [the person with whom he engaged in suspected exchange] was known to the officers"); Clark, 65 Mass. App. Ct. at 45 (similar); Smith, 55 Mass. App. Ct. at 573 (similar). He was aware of no reports of shoplifting in the area that day that might have added to the reasonable suspicion calculus. See Commonwealth v. Ellis, 12 Mass. App. Ct. 476, 477-478 (1981) (no reasonable suspicion where officer had no "independent information, such as a tip, that a crime was being committed" and "[t]here had been no report of a recent crime"). That the area is high crime did not justify the stop. See Narcisse, 457 Mass. at 13; Clark, supra at 44; Smith, supra at 572. The defendant's nervous demeanor, and McHugh's general "sense of concern that something might be wrong," also did not justify the stop. See Cruz.

Justice William Meade dissented, saying the officer had more than enough reason to order Chin-Clarke to stand against the wall - the point at which Chin-Clarke became "seized." He noted the officer had been patrolling that particular area for four years and had plenty of experience in spotting illicit sales on a stretch of Boylston known for such activity and had made numerous arrests in similar cases.

With that experience, as well as his training and the fact that the location was a high crime area, McHugh saw Noj holding a bag of clothing, with the defendant looking on, and he heard one of the men ask, "[H]ow much is this," as the merchandise was held up. As the motion judge found, when McHugh approached the men, he was neither "hostile" nor "aggressive." McHugh inquired if the goods were indeed stolen, which startled Noj, and he exclaimed, "[W]hoa." As McHugh spoke to Noj, the defendant had his hands in his pockets and was surveilling Boylston Street. These specific, articulated facts, and the reasonable inferences drawn therefrom, when viewed in total and in light of Officer McHugh's experience, provided him reasonable grounds to suspect that Noj was attempting to sell or the defendant was attempting to receive stolen goods.

Commissioner Gross will not be pleased with this one.

and they don't give back the contraband or gun!

The bags of drugs look just like the snappers we used to play with as kids.

If the prosecutors cannot use the gun and drugs

And if the defendant

had not been arrested and then sold those drugs to someone who OD'd or killed someone with that gun, we would hear "why didn't the police do something about him before this?" The police are trying to keep our streets safe but the courts, the mayor and the DA are doing their best to tie the hands of the police and thus allow crime to increase and the quality of life of law abiding citizens to be diminished. I'm sure it would be a different story if something happened to one of their family members by this criminal who you know is going right back on the streets to commit more crimes. I'm sure this will not be the last time we see his name involved in a crime.

if the police did their jobs correctly, they wouldn't have their evidence thrown out.

the courts, the mayor and the DA are doing their best to tie the hands of the police and thus allow crime to increase and the quality of life of law abiding citizens to be diminished

The cops can't do their jobs correctly under the law they're sworn to uphold, but somehow it's everyone else's fault. All we need to do is let them search and arrest whoever they want and everything will definitely work out great for the rest of us!

Do you think this was a bad arrest Fungwah?

Or do you agree with Judge Meade and Rachel Rollins who thought the search was good?

To be honest, yes

I don't think "being nervous near a cop" should be probable cause for a search, especially given the history of police in this country.

(Also, kinda funny to point to the DA as supporting the search when the OP pointed her to "tying the hands of police" in this case.)

That’s not what happened....

The PC to search wasn’t just based on nervousness...

The cops did do their job in this instance.

They got a gun toting drug dealer off the streets. The court is basically allowing this dbag to go right back out to possibly kill someone. Are you ok with this dope selling drugs to your family and friends or shooting them? I'm not. I would rather cops be able to search those they find suspicious than to allow thugs the run of the streets. Why should law abiding citizens have to suffer at the hands of criminals who could have and should have been removed from the streets.

the court is also protecting you

and your right not to be subjected to stop and frisk.

either the rule of law matters or it doesn't. which do you prefer?

Why would he shoot my family

Why would he shoot my family or friend? Seems incredibly unlikely.

The gun is just there to show he believes in his constiutional freedoms.

After all, cops would never abuse the powers they've been given, right? Definitely they're a trustworthy bunch who only have the populace's best interests in mind. And certainly there haven't been any stories about people being injured or killed during police arrests or searches lately that might make one wonder about expanding that power, that's for sure.

Yep, this guy is most likely

Yep, this guy is most likely guilty of a crime. And this is what happens when the police ignore people's rights to catch criminals: Criminals go free instead.

You should be upset at the cops for bypassing well-established Supreme Court precedent (the "reasonable suspicion" and "articulated facts" terms are straight out of Terry v. Ohio, which governs these kinds of stops), and costing themselves this case. Not at the court for actually doing its job making sure the cops do theirs.

How many years of failure do

How many years of failure do you need before you realize the war on drugs doesn't work?

How many times bigger does our prison population have to be compared to every other country before you realize there is something wrong with our criminal justice system?

How many times do you have to see only white people agreeing with you before you realize there's something invalid with your logic?

To the degree I'm reading the legalese correctly:

- Suspect was present at what was likely scene of fencing stolen goods
- Suspect acting nervously, gave false name, ssn, and then STARTED A FIGHT

I appreciate the 4th Amendment and limits on police searches. But this one seems legit. Glad the illegal gun is off the street, at least. And appreciate the officer's work.

Right. Because a millionaire

Right. Because a millionaire paying mad real estate taxes living in an adjacent highrise didn't get shot at by the guy with the gun.