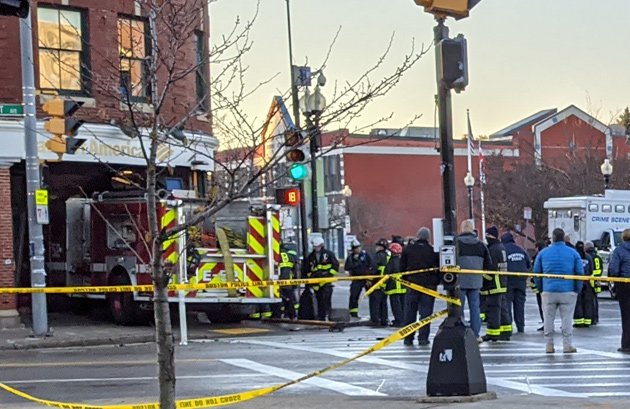 Engine 52 in Bank of America. Photo by Aaron Zaubi.

A fire crew responding to a fire at Charlie's House of Pizza, 1740 Dorchester Ave., crashed into a car and then the Bank of America in Codman Square early this morning.

Boston Police report the crash, shortly after 2:30 a.m. involved an off-duty officer and the firetruck at Washington Street and Talbot Avenue. After the vehicles collided, the firetruck, Engine 52, wound up in the bank branch.

Because of the nature of the victim's injuries, the BPD homicide and fatal-collision investigations units were called in, police say.

Engine 52 is based at the fire station at 975 Blue Hill Ave.

The Boston Fire Department reports firefighters responded to Charlie's around 2:20 a.m. for what turned into a two-alarm fire. The department reported no injuries at the fire and estimated damage at $300,000.

Was the bank going!

Was the bank wearing a helmet

Was the bank wearing a helmet?

Was alcohol a factor?

Was alcohol a factor?

Ha Ha people got hurt going to put out a fire.

The whole point of advocacy for safer streets is that they're safer for everyone, including our firefighters. It's worth someone making the point that road design and driver error leads to a lot of these kinds of issues, especially since our elected officials seem unwilling to.

Advocacy isn’t bizarre, the comments are.

fell right into that trap

these are all the comments that get made when anyone not in a vehicle gets hit by a vehicle.

Did I fall into that trap? Do

Did I fall into that trap? Do you think I’m unaware of the comments people make when a pedestrian of cyclist gets hit? Been on Uhub for years. Usually the comments are referencing a remark Mayor Walsh made about being aware of your surroundings. This involved a fire engine and an SUV. The comments weren’t about advocacy, neither was mine. That was quite a jump.

I'm not sure, but it is being

I'm not sure, but it is being reported that the Black police officer is in critical condition. Thank you for your compassion and concern for him and his family though.

Is the McDonald's next door

Is the McDonald's next door alright? j/k
That's a truly Boston intersection.
10 lanes of traffic intersect there.

the McDonalds is the opposite

the McDonalds is the opposite corner to the crash. The bank is southeastish, and the McD's is northwestish. I heard these sirens. It wasn't close enough to be loud but my sleep schedule is way off this week.

A friend of mine who lives on Mather Street

heard the crash and then looked at the clock: 2:34 AM.

Half a mile away. Must have been one big bang at the scene.

this seems underreported so far...

Equipment failure? Trying avoid someone/vehicle that ignored the sirens and obstructed the firetruck when traveling through the intersection? Given my experiences with that (terrible) intersection, the later seems very likely as people seem to view all traffic signals there as mere suggestions.

visibility is not great.

Eastbound on Talbot is uphill, so Washington Southbound and Talbot westbound are hidden.

I agree I live on the ashmont

I agree I live on the ashmont side of talbot ave and it's very dangerous. Traffic moves which ever way

The bank must have jumped right out on them since they had bad sight lines.

While the officer was, in fact, sitting in his vehicle, he was also driving it at the time - the crash wasn't just a firetruck careening through the square, hitting him and then crashing into the bank.

Still seems to lack a lot of info

Not from you, but from the accident report. Did the officer drive out in front of the truck or something?

How about I hope all involved

How about I hope all involved are ok? Officer sent to the hospital with life threatening injuries, pretty light hearted banter for a pretty serious incident.

The only way that fire truck

The only way that fire truck could end up in the bank at that angle would be if it was traveling up Washington from Park St and collided with the vehicle driven by the off duty BPD officer who was traveling on Talbot towards Ashmont and didn't stop for the lights and siren.

No, cop was coming down

No, cop was coming down Washington towards the intersection and the fire engine was coming from the Blue Hill Ave end of Talbot. There’s a video showing the cop going fast with the green light, looks like he hit the brakes when he saw the truck. If he kept going it looks like he may have avoided it but who knows.

I saw the video

Isn't the speed limit 25 mph here. That's not what it looked like. Lower speed likely would have had a better outcome.

You are correct, I had the

You are correct, I had the vehicles reversed in my visualizing.