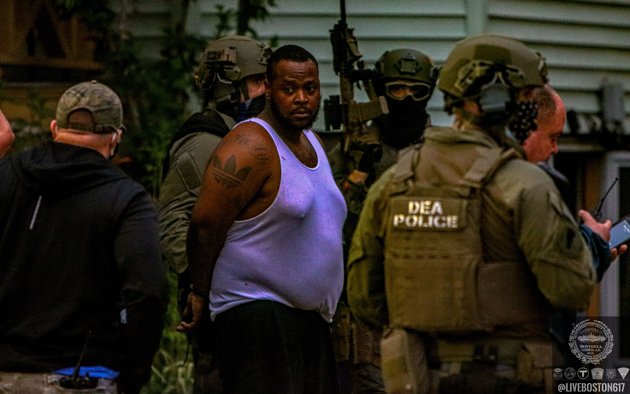 DEA agents and Boston drug investigators were busy early this morning arresting two brothers and their associates on charges of wholesaling cocaine and crack in a swath that ran from the Fidelis Way development in Brighton to the South End and Mattapan.

Brothers Matthew and Kenji Drayton, along with 22 associates, were named in two separate complaints unsealed this morning in US District Court in Boston, following a 20-month DEA investigation that showed gang members kept right on selling even as Boston Police kept arresting individual members over the course of the investigation. Some of the associates allegedly worked for the brothers while others were allegedly their suppliers from other, even larger dealers.

All were charged with conspiracy to distribute cocaine and cocaine base.

Each of the brothers ran their own drug ring, wholesaling drugs to other Boston dealers, but kept in close contact; Kenji Drayton would sell drugs to his brother for distribution, according to court records. The two rings shared a stash house on Larchmont Street in Dorchester, according to an affidavit by a DEA agent on the case.

According to the affidavit, selling drugs wasn't the only way Kenji Drayton, 40, made money: While the South Boston convention center was operating as a coronavirus field hospital, he worked nights there helping to sterilize the facility. Matthew Drayton, meanwhile, had a job as a maintenance worker and ran his own home-improvement company, according to the affidavit.

The affidavit continues that as the pandemic worsened, Kenji Drayton began having trouble securing cocaine for his customers, because Covid-19 issues were disrupting drug supply chains, in particular for cocaine - which also meant higher prices. The agent described a phone call between Drayton and Derek Hart, one of his alleged suppliers from a larger cocaine operation, on April 24:

HART told K. DRAYTON that he should have cocaine within the next week ("It should be within the week though"). HART indicated that he was supposed to receive something "today," but that it was "40 something." I know that $40,000 for a kilogram of cocaine is expensive and believe that HART was saying that he did not want to pay that much ("they mapping in the air"; "we're gonna figure something out"). HART continued to assure K. DRAYTON that cocaine was coming "sometime this week." I believe that the supply of cocaine to wholesalers like HART has been interrupted by the pandemic, which has, among other things, interfered with supply from Mexico and resulted in border closures, making it harder to move cocaine into the United States. According to the affidavit, Kenji Drayton ran the larger of the two rings out of his condo at 519 Harrison Ave. in the South End. The affidavit used to charge him and 16 alleged members of his ring and some of his suppliers, such as Hart, is full of details of surveilled drug deals, from Moreland Street in Roxbury to a Burger King in Roslindale to Shafter Road in Dorchester.

It also includes transcripts of numerous phone calls in which drug deals were allegedly arranged, as well as one between one of Kenji Drayton's alleged suppliers, Winston McGhee, and a customer who was complaining that the raw cocaine he'd bought wasn't transforming into crack when he "cooked" it. According to the transcript, McGhee put on an impromptu cooking show, trying to walk the customer through the proper steps:

And when the customer still didn't seem to get it, McGhee offered to come over and cook it in front of him so he could watch and learn.

The affidavit in his case says the ring continued to operate despite several arrests of members by Boston Police. Ring members had an idea they were under investitation, the agent wrote, and would often change phones or arrange to meet in person to try to avoid surveillance. At one point, before one such meeting, one person got spooked after seeing a Boston cop - active in the area not only as an investigator but as a coach in a youth-sports program - in two different locations on the same day. At another point, two alleged ring members decided to talk over Apple FaceTime in an attempt to avoid their conversation being recorded.

Like other businesspeople, the Drayton operation had everyday business issues. On Feb. 13, two of Kenji Drayton's associates had some trouble agreeing on a place to meet to consummate a deal. They finally settled on a commercial stretch of Morton Street, near the Pit Stop Barbecue. But then one realized: "That means you gotta double park, ain’t gonna be no parking over there."

Kenji Drayton was convicted of a 2001 murder, but in 2018, the Supreme Judicial Court agreed he deserved a new trial after a woman came forward and said the main witness against Drayton was lying because at the time of the murder, he was having sex with her in a bathroom and so could not have seen the murder. At issue was the fact that the woman died before she could be questioned by prosecutors; the SJC ruled her statement was good enough to warrant a new trial.

Matthew Drayton, 43, ran his operation out of the Fidelis Way housing development in Brighton - where he and his associates managed to gain control of several apartments to store and package cocaine and to process some of it into crack. Investigators initially started looking into his operation, then widened their probe after learning about his repeated deals with his brother.

Although Kenji Drayton mostly supplied his brother, on July 2, 2019 Kenji called to ask if he had any cocaine left because he was flat out even as a customer was asking him for some. Matthew Drayton replied, according to the affidavit, that he might have some up at "the bricks" - Fidelis Way - but that he couldn't go up there right then because a BPD drug-unit officer who knew him was up there at the moment. In fact, drug-unit officers were there to do electronic surveillance on Matthew Drayton and had to break out of their covered space to respond to a domestic-violence call in the development.

According to the affidavit, Kenji called Matthew later in the day to say never mind, one of his regular suppliers had called and had some cocaine to sell.

Time to defund the DEA, too

Why bother with these victimless crime arrests and prosecutions anymore?

Better to legalize recreational drugs and disband the DEA entirely.

It would certainly be appropriate to do it now, given how deeply racist the history of drug laws and drug law enforcement is in America.

Crack will always be wack

We can't say legalize cocaine or crack
Weed is totally different and coke tears bot only people apart physically, medically and facially but entire neighborhoods crumble over it.

Never say crack as a recreational drug should be legalized

Many many overdose deaths and many other ruined lives. These are not victimless.

Yes, drug abuse is a problem,

Yes, drug abuse is a problem, just like it is with legal drugs. It's easier to treat it as a health problem (as we do with tobacco and alcohol) when it's legal.

We still license these goddamned bars!

Bring back the Excellent Eighteenth!

Drugs don't disappear with being illegal

I completely agree with Scratchie. People are going to get the drugs they want regardless of whether or not they are legal. ALWAYS. We might as well legalize and take power away from violent cartels and gang members. Treat addiction as a health issue. By keeping drugs illegal we are promoting violence, keeping minorities in jail, and bleeding police and DEA budget.

Cocaine is hardly victimless, going all the way back to the originating cartels and human rights violations against farmers. Granted, that same issue comes up with coffee and other crops.

Granted, that same issue comes up with coffee and other crops.

Huh. The deuce you say. It's almost as if the problem isn't actually connected to the specific plant that's being grown...

I would think that exploitation would be worse for illegal crops than for legal ones, given that illegal crops have to be produced "under the radar", and thus subject to less scrutiny. Anyone have evidence that contradicts this hypothesis?

Anyone have evidence that

Anyone have evidence that contradicts this hypothesis?

The history of American economic colonialism in the western hemisphere?

Sure, that's been pretty terrible. But is the lot of those who produce illicit crops better, worse, or about the same.

As my dear departed granddad would say...

"This is not a competition to see who's the worst."

I think you're onto something, but it's not quite the thing you think it is. Exploitation happens today in licit crops as well, including coffee and chocolate, and it happens for the same reason. It's not that the crops are contraband; it's that there is no legal protection or oversight over at least part of the supply and distribution chain. Sellers of illicit drugs in the United States are victimized because they lack legal recourse; laborers including children are trafficked to work chocolate and coffee plantations because their industries lack adequate protections. Being trafficked here or being trafficked there, which is worse? That's not really the right question, is it?

And undo the Democratic

And undo the Democratic presidential nominee’s Hard work back in 1991.

Him and his buddy Sen Strom Thurmond.

Yes, exactly, along with the

Yes, exactly, along with the work of Ronald Reagan and Richard Nixon and hundreds of other politicians. Did you have a point, or can you just not stop thinking about Joe Biden for some reason?

Well all those people are

Well all those people are dead, except one, and he is going to be the next president.

is far more frightening and vastly more dangerous to the well being of the citizenry than a drug ring that cares about it's customer's satisfaction enough to provide personalized cooking classes.

They are arresting people

They are arresting people that in the course of their 'employment' are likely armed, and are willing to use force to get what they want.

Why would they not wear equipment to protect themselves? Especially when armor is so cheap.

The comment is not an endorsement of the war on drugs.

Sorry couldn't process much of all this detail after I hit "Winston McGhee." Great name.

All I can think of is the new Food Channel show "Winston McGhee's Now You're Cookin' with Crack!"

I accept that I'm a terrible person

...for looking at the photo and thinking of a sales opportunity for Frank Costanza's manzier.

But the name was rejected for being too ethnic.

That picture be censored. Holy moobs.

Forget the anti drug this is your brain egg frying

commercial and go with this is your chest, these are your man-boobs on drugs.

'Post-Covid' innovation center could replace failed innovation center in Brighton
Hazmat crews rush to Boston College after liter bottle of hydrogen sulfide leaks
Things far from fine on the B Line
Citizen complaint of the day: Waterfoul is what you get if you feed the waterfowl
Shofar, so good
Boston College students either don't care or they don't check their e-mail