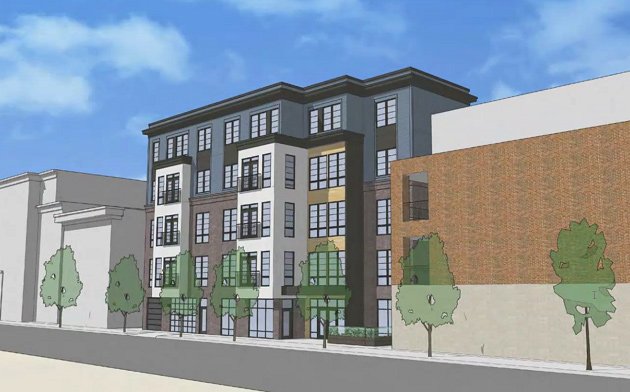 The Zoning Board of Appeal today approved a five-story, 30-unit condo building on East Second Street in South Boston that will feature patios and roof decks large enough to give residents a breather but too small to support the sort of boisterous large parties that have become technically illegal in the midst of the pandemic.

The proposed building, which will have 35 parking spaces in a tightly packed garage, will replace the current Boston Trolley garage at 515 East 2nd St., between Dorchester and H streets.

Joe Hanley, attorney for developer Kems Corp., said the building was designed with "a post Covid-world vision." Specifically, he said 80% of the units will have balconies - and six will have roof decks - on which residents can take a break from working in their home offices but not use them to in planning for parties. "They are relatively small in size so you don't have huge gatherings," Hanley said.

The rendering of the balconies seem little different from the Juliet balconies the city has been approving for years. But up on the roof, what had originally been planned as large decks great for warm-weather parties have been reduced to 12x12 spaces, separate from each other and each served by its own head house. Board member Mark Erlich expressed concern about having seven large roof structures - the building elevator will need one as well.

Board members also expressed concern about jamming 35 cars into a basement garage - some of them in two-level stackers. The board asked the BTD to work with Kems to see if the space could be better designed to make it possible to get cars in and out more easily - short of reducing the number of spaces to make the flow in and out better.

The mayor's office and the offices of City Councilors Ed Flynn and Annissa Essaibi-George supported the project. City Councilor Michael Flaherty, who normally opposes large projects in South Boston because of an ongoing rezoning effort, did not oppose this proposal.

"Board member Mark Erlich expressed concern about having seven large roof structures - the building elevator will need one as well."

So bland and boring. Are

So bland and boring. Are there any architects left with flair?

Residential buildings could replace East Boston casket factory destroyed in a fire
Bus driver who was out on bail on an assault-and-battery charge tried to rape a passenger in Winthrop, DA charges
East Boston Savings Bank bought by Rockland Trust
World-class signage at Logan Airport
Bank customer is an honest woman
If only Boston had a public-transit system with stops right at the airport ...