In Dedham, a new hotel is planned, as are two new floors for long roofless shell of a former office building near the Bridge Street mini-golf place 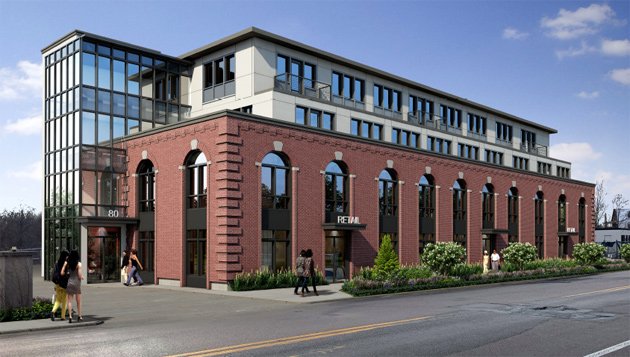 On Bridge Street, a hollowed out shell would sprout two new floors. Rendering by McKay Architects.

The Dedham Planning Board meets tonight to consider a developer's proposal for a six-story, 120-room hotel on Eastern Avenue, behind the Papa Gino's, Pep Boys and Petco on Providence Highway, and a separate developer's proposal to turn a long abandoned empty shell of a building on Bridge Street into a residential building.

The Saletin Real Estate Group of Cranston, RI, is proposing the hotel on what is now a rarely used parking lot. It's the first hotel proposal for the stretch of road near the Dedham/Boston line since the collapse of a plan for a kosher hotel on the Boston side of the line in 2015.

Saletin would seek to find a national hotel concern to run the new lodging space.

The proposal has the backing of the Dedham Square Circle, which represents businesses in the nearby town center, partly because of the extra tax income a hotel would mean over the lot's continued use as an asphalt-based weed garden, partly because guests at the hotel might be drawn to Dedham Square's businesses, especially with Saletin saying it would be willing to work with the town and state to figure out a way to get pedestrians safely across Providence Highway from its side of the road.

Separately, Petruzziello Properties, whose name is familiar to anybody who drives into Dedham Square from Rte. 1A, is proposing to take over a failed renovation of a former medical office building at 80 Bridge St., next to Moseley's on the Charles, remove the temporary metal roof that was finally put atop it after the interior had been left exposed to the elements, and add two floors and create 41 residential units with ground-floor retail space.

The board's meeting begins at 6 p.m.

I'd love to hear the story about why someone took a nice-looking sports medicine building, ripped it to shreds, and then spent like 4 years SLOWLY putting it back to together.

Relatedly, when I last read some comments on a Dedham board about this, people were saying, "This is a residential area. This doesn't belong here!"
A) There ARE houses nearby, but the restaurants, car stereo shop, oil company and the 7-11 would suggest that it's more commercial than residential. and
B) They are building a place for people to live. How is that not compatible with a "residential" area?

The roofless shell on Bridge St that was most recently a medical building was once a ballroom, like Moseley's up the street. Can anyone remember what it was called? This bothers me every time I drive past the eyesore.

I don’t remember it as another ballroom but it was Amaru’s Log Cabin and Amaru’s Restaurant.

It looks like Lillian Amaru, one of the last owners passed away in 2019 at 91. There’s more detail in her obituary in the Cape Cod Times Online.

Mosley's was Gagliard's restaurant. The present used to be medical was Amaru's function hall

Gagliards was located what is

Gagliards was located what is Waterford's

Mosley's had been there since the early 1900's.

In other Dedham news

Proposal to make a Hyde Park pond 'great' may not be so good, say developers with plans for three pondside condos
Sprague Pond in Readville is OK, but could it be great?
You bring snacks?
Doing some home shopping in Needham and Dedham
They only go bald later in life
Dedham will soon be kebab-bab-bab'ing along