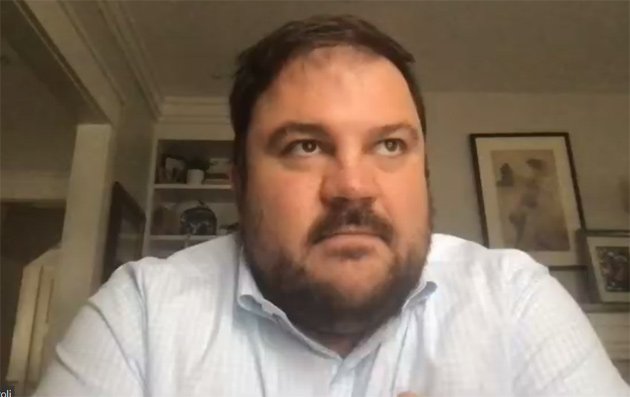 Frattaroli was not happy today.

On July 15, a doorman at the Cunard Tavern on Orleans Street in East Boston was trying to get an argumentative patron out of the place when a large rando - 6'3" and 260 lbs. or so - walked in off the street and punched the doorman, exposing an ankle bracelet of the sort judges order people awaiting trial or on probation to wear, according to police and restaurant owner Philip Frattaroli.

Frattaroli told the Boston Licensing Board this morning he never used to have a doorman at his restaurant, which he opened in 2017 after growing up in his family's restaurants across the harbor in the North End. But faced with "drunk people coming from the waterfront who are over-served and abrasive to our customers and staff and just ignoring the staff and taking over," he said he had little choice. He added that he's even been forced to lock his doors sometimes, turning what is normally an open-air restaurant on nicer evenings into a sort of speakeasy, where regular patrons have to be admitted.

"I'm disgusted, I really am," he said, adding that after the incident, he also feels ashamed, because he was unable to protect one of his employees from getting punched out.

"It's really the most difficult time we've ever had in the business," he said.

Frattaroli was before the licensing board because after the incident, police issued him a citation - which requires a board hearing - since the attack happened on his licensed premises. The board could decide at a meeting on Thursday whether there was anything Cunard Tavern could have done to prevent the attack and, if so, whether any punishment is warranted.

Frattaroli did not call out the Tall Ship by name, but his descriptions of the place left little doubt that was what he was referring to. The ship itself has a capacity of roughly 250 people, but the Massport-owned pier it's docked at can hold several hundred more, and too many of them leave with more than just a spring in their step and then fan out into the neighborhood looking for more to drink, he charged.

Frattaroli said the July 15th trouble started around midnight when a guy came in and tried to get a drink, but the bartender refused because he already appeared drunk. Rather than leave, the man began to argue. When the doorman went over to help out, Frattaroli said, the guy began yelling at him, asking "Why don't you ask the bartender to leave?!?"

The doorman was in the process of herding him out, Frattaroli said, when the big GPS-clad stranger just walked in from the street and punched the doorman. The puncher and the drunk then waltzed out and down the street, he said.

Frattaroli said he hasn't gotten much help from the city in general or police in particular.

"The city has left us alone and we have to fight this on our own," he said.

Does the ship need any city

Does the ship need any city licenses, which would allow the Licensing Board to do something about this? I could see ships being outside the city's jurisdiction since they're mobile and in public waters, and subject to other types of state and federal regulation.

even if the licensing board

even if the licensing board cant do anything, Massport certainly has leverage in this. Now whether they will care, I don't know.

the only thing Massport cares about in East Boston is the land Massport owns in East Boston. Unless drunk people start bringing frisbees to Piers Park, Tall Ship has nothing to worry about.

It would be interesting to know.

There must be some kind of regulation because I recall the booze cruises being suspended earlier this summer for violations.

Must be a shock for Cunard Tavern

no longer being the loudest thing in Eastie.

It's a good thing I don't go

It's a good thing I don't go to sleep before 9:30 because most nights all I hear is the Tavern. But I still prefer it to the yuppies of the Tall Ship who try to turn Orleans into two-side parking (a true thing that happened once, to astonishing results), eat up other parking, and are extremely loud late at night (later than the tavern) pretty much every night.

It looks like ever since the ship opened with publicity from Boston Magazine, it’s been an over the top success !! I can see why other nearby bar owners can find any excuse to maybe shut the ship down permanently.

can see why other nearby bar owners can find any excuse to maybe shut the ship down permanently.

I'll say the owner of

I'll say the owner of Cunnards Tavern most likely has a point.

I won a gift card there when I won a photo contest so got to stop by a few times , including once during the quarantine period for pick up, and they seemed like a really cool place. The food was great, the atmosphere was lively. I could see why some neighbors would be peeved but it's not end of the world stuff.

I've also been witness to Tall Ship in all it's glory. The rules of the universe seem to be suspended down there. Cars everywhere. Huge lines to get into a tiny ship space. People from all over. I mean I dig the atmosphere and I never even ventured onto the actual premises... But the place seems to have no real societal structure outside of the line to get in. I could imagine drunk patrons wandering the neighborhood. I could also imagine people waiting in line for two hours pregaming and then giving up and looking for some fun.

I don't think Tall Ship is itself a problem but it does seem like maybe some of these issues could be mitigated and controlled before patrons get released into the rest of the world.

Maverick Square market gets approval to sell Central American rums
Citizen complaint of the day: Yuppie loathing along the East Boston waterfront
The jumboest of the jumbo jets makes unexpected return to Boston
East Boston urban farm to go year-round with greenhouse heated by geothermal
Capt. Kirk beams down to East Boston
Directors of East Boston neighborhood association dissolve group after nobody steps up to help run it