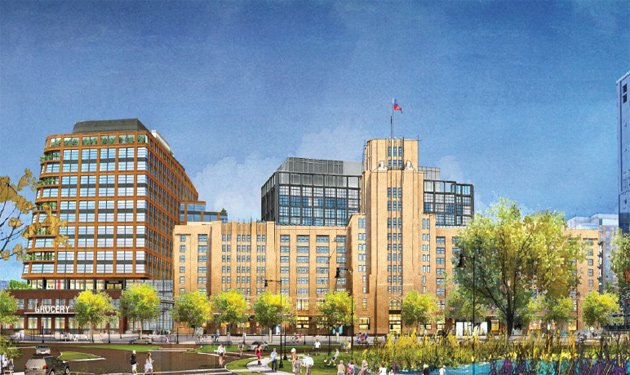 Samuels & Associates yesterday filed plans with the BPDA for a new 13-story building next to the existing Landmark Center that would include 550,000 square feet of lab and related office space and room for a large new Star Market that would replace the current one on Boylston Street.

The filing came as another developer was filing its own plans for a ten-story life-sciences building a couple blocks up Brookline Avenue.

Samuels is proposing no increase in the roughly 1,500 parking spaces it has already committed to for renovations to the old Sears building and construction of another new building on Brookline Avenue.

The company says it expects to meet some of the increased commuting demand by relying on the Green Line and the new cars and service the T is promising. It adds it will also add a second Bluebikes station to the complex. Also part of Samuels's ongoing work at Landmark Center is construction of a new 12-foot-wide bicycle/pedestrian path along the Green Line tracks, which "which will bridge a gap in the bike network by connecting the Emerald Necklace path to Lansdowne Station, Fenway Park and the new separated bike facilities on Beacon Street that lead to Kenmore Square." Samuels says the new building is designed to have "net zero" carbon emissions through a variety of steps that include state-of-the-art insulation and HVAC and lighting systems, a mostly electric heating system - with a natural-gas boiler for really cold days - and the purchase of power from "green" sources. In all, the company says the building will consume roughly 51% less energy than a building with more traditional construction and design.

View from the Harvard-Vanguard parking garage, showing the green roof: Although Samuels is not expecting any flooding from the nearby Muddy River, it says the building's key systems will all be placed well above the height of potential flooding from the heavier storms that climate change could mean for the Boston area.

Samuels recently announced a deal with Star Market to carve out 60,000 square feet of space in the new building for the supermarket and for Samuels to then take over the current market and its adjacent, abandoned gas station. This would give Samuels, which already has several developments in the Boylston Street corridor, room for yet another project.

Samuels says it hopes to begin roughly 32 months of construction for the new building late this year or early next year.

Nothing wrong with adding more density to the area and glad they aren't adding more parking considering it's nearly built on a green line station and supermarket.

It looks like they are chopping off the end with the Bed Bath and Beyond. No loss if it doesn't return. (College students might not agree.)

I wonder how many people remember that it used to be more expensive to board the D line starting with the Fenway stop. That always bugged me seeing as you could walk three blocks to St. Marys for a lower fare.

but it would’ve been nice to have the Wegmans that was going to go in there originally, and they should build their own parking instead of taking it away from the neighborhood, which you know that they’re going to do

The re-done Star Market in West Roxbury is pretty much a clone of Roche Bros at the other end of the neighborhood (although much larger, and with a way better parking lot). No, neither is Wegmans, but it's not what you tend to think of when you think of Star Market.

that Star Market was designed by a maniac

Other than that though, totally fine.

No logical sense to the story layout at all.

Ever been to the Porter Square Shaw's (nee Star Market)?

They re-arrange the store at least once every other year. No matter how they do it, the store is small & cramped

It used to be free

To board the green line outbound (except the D line IIRC) once it got above ground, too.

When I was first in Boston, most subway stations had a 60 cent fare. As you note, the above ground Green Line stops were free for outbound service, but charged for inbound and by a greater amount. Inbound surface stops on the B, C, and E lines were either a 60 cent token, or 75 cents in coins. For the D line, there were two zones. I want to say it was 90 cents from Reservoir through Fenway, and $1.35 from further out, but I could have those numbers wrong, as I didn't ride the D line often. Suffice it to say, it was more expensive, and continued to be that way until they eliminated tokens.

A couple of stops on the Braintree Red line branch were also more expensive, costing two of the 60 cent tokens, rather than one.

Build something but not this

I don't mind putting up extensions to the Landmark Center building but they should strive to make them match architecturally. These proposals aren't nearly so pleasant. The parking doesn't bother me; as state policy, we should be trying to eliminate parking in the city while limiting development outside of urban centers and expanding capacity and adding bus and rail routes to mass transit and further improvements on making the streets bike friendly.

I think they should build it, but we also desperately need more housing. No large developer right now is building housing. It’s all lab.

The Winthrop Square tower has a lot of housing - although they switched it from condos to rental because banks largely stopped financing condos when the pandemic started.

There's also a residential tower going up on Lagrange Street at the end of Chinatown.

Thank God it's not condos

Say your lucky enough to be making $15.00 an hour. That would give a single worker working 40 hours a week $600 per week. $2400 per month. How could you afford a condo what with condo fees cooked in and manage to eat and keep yourself entertained? Not to mention transportation costs and utility bills. It's just not economically viable. There is a huge market out there for sub-$1000 rental units. The first developer to realize this is going to make a fortune but they'll have to be patient.

They're not going to make a fortune

Because you can't profitably build units which would rent for under $1,000 in Boston without free land and a big helping of government subsidy or charitable contribution. Just the operating costs -- heating, property management, insurance, maintenance, snow removal, etc. -- are a few hundred a month. The capital cost alone, ignoring interest, on $200,000 per unit (which is unrealistically low for the Boston area) is $560/month over 30 years.

All those things which condo fees cover have to be baked into rent -- and you have to account for the fact that some tenants (just like some landlords) suck.

I have no blades, and I must cool
Shots fired outside Fenway Park on Sunday
Developer files plans to replace the Fenway Star Market with an 11-story life-sciences building
Developer says it's secured financing to build 34-story apartment building across from Symphony Hall that was approved in 2017
Citizen complaint of the day: Boston Calling making windows rattle, babies cry for four miles around
Rainbow after the darkness and storminess