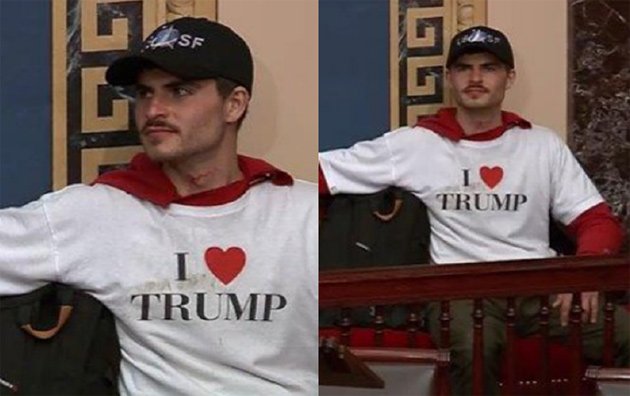 Bacon in Senate chambers, from federal statement of facts.

A Boston-area man was charged today as a participant in the failed Capitol coup on Jan. 6.

Noah Bacon - listed in an FBI statement as a Somerville resident, but in a formal court charge as a Lexington man - was charged with knowingly entering or remaining in a restricted building or grounds without lawful authority, entering or remaining in the gallery of either house of Congress, disorderly conduct in a Capitol building, violent entry and disorderly conduct on Capitol grounds and obstruction of justice in Congress.

According to a "statement of facts" by a US Postal Service inspector who worked on the case, Bacon went way further into the Capitol than other alleged failed regime changers from the Boston area - he made it into the Senate chambers, as memorialized on some video posted by the New Yorker:

New Yorker Reporter Luke Mogelson captured this video. Your affiant located a man believed to be BACON at approximately the four-minute mark, wearing a red hooded sweatshirt with a white T-shirt over it and a dark colored U.S. Space Force hat. In the video, this man believed to be BACON helps to open a Senate balcony door as he and others enter the balcony area of the U.S. Senate Chamber. About the same time, an unidentified person in the crowd announces, “Where the fuck are they? Where are they?” Another unidentified individual says, “While we’re here, we might as well set up a government.” Still others are shouting, “Treason. Treason.” I compared images of this man believed to be BACON from the video to the Massachusetts RMV image of BACON and to the Instagram image depicted above, and they all appear to depict the same individual. ...

Your affiant also located images of BACON on United States Capitol Police security cameras. I compared these images to those above captured by CSPAN, in which Witness 1 positively identified BACON. Based on the clothing, facial features, and hat, agents believe the following photograph captures BACON walking inside the U.S. Capitol building on January 6, 2021, during the Capitol Riot.

On his yoga-instruction page, Bacon writes:

I have been fascinated by spirituality and the study of human nature, healing, and human potential as long as I can remember. I started in middle school with my parent's bookshelf and haven't stopped since. After completing high school with honors I started traveling and doing odd jobs along the way in search of what I had been reading about for years - actualized teachers.

My studies brought me to Maui, Brazil, Peru, all around the USA, and many places in between. I have trained in academic mindfulness based practices, such as a 200-Hour yoga training at Shoshoni Yoga Retreat in Colorado and 500-Hour at the Kripalu Center in Western Mass. I have traveled to meet public as well as unnamed teachers and have lived with master meditators apprenticing in 24/7 immersive "karate kid" style. In search of universal truth and my own truth I have hitchhiked cross country and traveled thousands of miles around our Hemisphere and have met amazing people everywhere I went. My emphasis is entirely on substance free practices, but I have joined in plant ceremony with Andean Q'ero shamans and participated in Wampanoag and Kahuna traditional sweat lodges. I love practices that celebrate life and self development.

City Council voting on budget for fiscal year that starts tomorrow, School Committee deciding whether to keep superintendent and what to do about exam schools, interesting lawsuits galore, cats lying down with dogs.

And, yes, this alleged douchebag.

Little secret: If I have to choose what to write about, here at the one-person Action News Center, I'll go with stuff I don't think anybody else will have. In this case, yes, news is already spreading far and wide about this guy, but every report I've seen so far just has his name and the fact he's been arrested, not the photos from the Capitol, so, you bet I'm going to break away from the City Council hearing - where our pal Frank Baker is busy voting against the school budget in part because he got laid off ten or eleven years ago today from the city print shop, and I wish I were making that up - to cover this.

You do a great job.

Back to Frank Baker though

is the guy really going on public record as opposing something as retribution? I suppose I respect the honesty, if not the behavior.

Were that he's sick to death about hearing about exam schools and doesn't think the city's paying enough attention to kids at other schools and something about how tomorrow all the city's "special" police officers, which he said included school police, basically lose their jobs (he then painted a picture of a crazed lunatic breaking into the council chambers and attacking the council president - who would stop the maniac? Baker concluded he'd have to do it, because who else but a tough guy, I guess).

But he kept bringing up the print shop. Maybe it's because today's the anniversary of his layoff, so it's fresh in his mind, but at one point he brought up the $400 million the feds are supposed to give BPS and how the hell can we trust an unappointed task force making recommendations on the money to an unelected school committee and imagine how little it would have taken to keep the print shop open! And again, I wish I were creative enough to make that up, but I'm not.

I'd bet he's a QAnon dolt

The crowd that gets into becoming a "seeker" in "spiritual" religious bullshit or other paths like that seems to overlap for a chunk of the people that fell for QAnon's "looking for answers" methodology. I've noticed a fair number of them in articles that describe the people arrested.

At least I think that's why you're seeing people who seem like they originally were more likely to be twirling at a Dead & Friends concert being arrested for the Capitol insurrection.

Scrolling through his Instagram posts and reading the captions shows some of that Q nonsense.

Well, he certainly achieved the goal of

finding his own truth. Not so sure about the academic mindfulness part, though.

that it wasn't his, and it wasn't true. But those are just details.

Obviously Allen is a common name and coincidences are common, but ‘Allen’ seems to be a popular name for South Coast extremists. Probably nothing, but worth following up on for a local journalist, I suppose.

Duxbury in on deck for sure

Feels like there's news about terrible people from Duxbury every damn week.

There are mentally ill people everywhere. Have some compassion, that was a terrible thing that happened.

Perhaps I am reading this incorrectly, but I reject the idea that anyone should have compassion for the homicidal MAGA Capitol insurrectionists. No sympathy for violent white nationalists.

Also, it wasn't just a thing that happened. It

was the long-planned endpoint of a years-long campaign by Twitler and Co. to undermine faith in the security of our elections, with its climax a carefully-orchestrated gathering of the loony tribe and speeches that directly incited it to that lethal, nearly democracy-ending riot.

The difference may be subtle, and to be sure both have MAGA hotspots, but the South Coast and South Shore are not interchangeable. Duxbury (the town with the anti-Semitic high school football team) is a South Shore community.

Not defending either, just a point of distinction. Easy mistake.

That video interview is pretty great. The only think that could have made it better is if the reporter handed him a cup of Dunks after she put him in his place.

That says it all right there.

Yeah, that's gonna look real great in court.
All a DA, jury, and judge need is to be reminded of
the madman "shaman" with the painted face who sang while America was attacked.

These people have a built-in self-destruct mechanism, I swear.
They even supply their own evidence to be used against them (videos).

If he is convicted and spends time in a Federal prison then he may regret having a reputation as a yoga instructor.

Please tell me that's not another prison-rape joke.

Prison is a refining experience that helps men and women reform from their naughty ways so that they once again fully contribute to society as loving, caring, tax paying citizens.

Where are you going with this?

Dean Swift respected one of the basic boundaries of human intercourse. Nobody likes to be lectured to. Hence satire.

He is a giant of satire. I stand barely as high as his little toe. But he teaches a lesson in how to communicate what no one wishes to hear. But to explain where I'm going please forgive the lecturing tone (please take that as a trigger warning).

Prison life can be violent. Prison violence and rape are real. Drug abuse in prison is real. Prison and jail deaths are real (e.,g Whitey Bulger and Jeffrey Epstein). Gang leaders directing gang members on the outside is real.

Pedophiles and child abusers are the lowest of the low. Why is Tsarnaev in a supermax prison? What non-US nationals would want to free him? A man who killed a child? He's in a supermax probably to prevent his "accidental death."

While prisons today are theoretically less about warehousing when compared with the 19th C. counterparts, they are still basically warehouses for people. Expensive warehouses it's worth adding.

Warehouses that not only remove individuals from open society but subject them to traumas. Traumas that still have a cost in the form of recidivism and costs of incarceration.

As a nation and a society we are far better than our predecessors where legal imprisonment is concerned. Yet behind the walls there remains violence. Violence that just makes things worse for everyone.

For all the attention given to illegal immigration as a nation we would be far better off fundamentally changing the path to imprisonment. Plenty has been done to reduce the use of prisons where law breakers are concerned (including changing laws that are unfair if not just wrong). But there remains plenty to be done. The rate of imprisonment in the US makes it a human rights issue. But it is not an issue that is politically sexy, or gets the blood rushing the way culture wars and illegal immigration gets people going. The moment that the match of sperm to ovum becomes a legal issue gets more attention.

So, with respect to Dean Swift, I'm just trying to point out that this one man (who deserves no pity, but perhaps compassion because all human beings deserve compassion) can lead to a discussion of a far greater problem in the US. One which continues to grow like a cancer; yet one most folks don't want to deal with.

Well, that's a useful expansion on your

first post, but I think satire that could be read as a prison-rape joke -- I don't see how the "yoga instructor" comment relates to your further elucidation -- could probably use some refinement.

I'm still striving to see the "yoga instructor" connection. Perhaps you would elaborate on it.

Pretty sure this kind of guy would be a poster child for a Sanders-Trump voter.

He puts his phone number up on his "website." I have half a mind to give him a polling call (they usually ask who you voted for in the past couple of elections).

In other Somerville news