Man left dog chained to pole at Short Beach in Revere to slowly drown in the incoming tide, police say 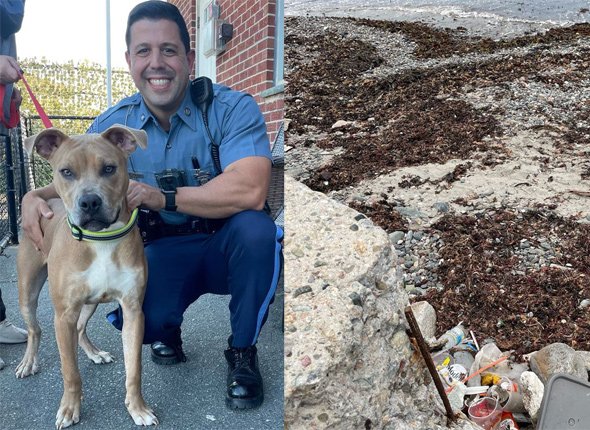 Dog trooper who helped find his alleged failed killer and the pole he was chained to. Photos by State Police.

State Police report arresting a man they say decided he could no longer keep his dog, but rather than go to a shelter, chained the dog to "an exposed steel rod at the edge of a beach, with a large rock attached to the chain to prevent the dog from escaping, and then walked away, leaving the dog to the mercy of the next high tide."

Fortunately for the dog, named Killer, State Police say, a Revere police officer and local kennel officer were able to free the male pit bull mix on Short Beach, around noon on Aug. 29.

The approximately 50-pound dog had a thick metal chain around his neck with a heavy rock attached to it, preventing the dog from escaping. The dog was left in a secluded portion of the beach close to the waterline, chained to the piece of rebar exposed at the bottom of the walkway where it meets the sand at the high tide line. During certain parts of the day this portion of the beach is completely submerged, with the tide rising as high as street level, past the point where the dog was chained. The dog was at risk drowning in a couple of hours if he hadn’t been found.

State Police report troopers and Revere officers on Friday arrested Elias Pacheco-Osario, 27, of Revere, after an investigation that included one trooper, Carlo Mastromattei, who worked on the case even in his off hours to find the alleged would-be dog killer.

Officers found Pacheco-Osario at his home on Roughan Street, not far from Short Beach.

During the interview the Trooper and Officer were able to confirm that Pacheco-Osario had been the dog’s owner and had walked to the beach the previous Sunday, tied him to the steel rod, and walked away, abandoning him. The suspect said he had decided he could not keep the dog any longer.

He was charged with animal cruelty and face arraignment in Chelsea District Court.

Someone who probably also thinks it is okay to hurt people. Someone who may need to be kept apart from society for a while. This took a lot of thought and effort.

I do not think any other species is capable of this level of deliberate cruelty.

"This took a lot of thought and effort."

But not enough to see how it worked out for the killer in Creepshow.

was "what's buried in his back yard?"

glad these cops were able to find his dude. absolutely disgusting.

But makes me wonder if this was a fight dog. With a name like Killer, and considering that state has both hands on the dog in a non threating manner (yes the collar is being held but still, the dog looks pretty happy. Then again if I was tied to robar for several hours and this hunky statie came to save me, I'd be pretty happy to.

My point is, after a fight dog gets too old or isn't really a good fighter, they are often killed. And they do this instead of dropping the dog off at a shelter because they don't want their little fight club found out. (because the shelter might start asking questions.. esp if the dog has injuries)

If you don't want your little barbaric fighting game found out, you don't do things that piss off people to the point where they work uncompensated overtime to bust your ass.

You tell the shelter that you found the dog running loose in the street. Just shrug and say "Urban area - what can I say".

I'm not an expert, just a volunteer at an animal shelter, but Killer (poor guy) doesn't look like a fighting dog to me. Fighting dogs' ears are usually cropped because natural ears will get torn off by an opponent. This dog's ears are natural and they look undamaged. Dog fighters try to build up the muscles in a dog's neck and chest; this dog looks normal for his size. Fighting dogs are also often afraid of people and this dog looks pretty confident. Thank you, Trooper Mastromattei!

Thats why I wasn't too sure

Thanks for chiming in, appreciate the correction. I wasn't sure and I forgot about the clipped ear thing. So yeah I'm wrong :D

Not trying to correct anyone, just sharing what I see. I hope that this (hunky) dog can get a new name and a new home soon. :)

Looks like a sweet dog. Maybe the problem the jerk (Elias Pacheco-Osario) had was the dog was too nice.

Elias, you might want to move. Your neighbors didn't have your back yesterday, and they sure as hell won't have it tomorrow.

Trooper Mastromattei subsequently obtained information that the suspect was a Hispanic male with facial hair who may live at an apartment at 35 Roughan St., an area not far from Short Beach.

My money are on the

My money are on the continuance without finding. Isn't Chelsea in the Suffolk county?

Rachel Rollins isn't interested in living rent free in your head. It's too cramped and smelly.

He's not a "promising young (27 year old) boy with a future" from one of the storied families of the North Shore hunt club set.

Had he just killed the dog when driving drunk it would be called and accident and dropped.

Carlo Mastromattei is a hero, a first-rate state trooper. I've met him. He responded to our 911 call in Revere one November night a few years ago, when our car was damaged after we hit two big Christmas trees that fell onto our lane from the truck in front of us. He couldn't have been kinder or more helpful. He made sure we were okay, that the trees were removed from the highway quickly, and that our car was towed to a good repair shop. He said we weren't in a safe area, so he drove us to a convenience store (with a restroom, desperately needed!), stayed with us until we found a ride home, and gave us tips on how to fill out the report for our insurance company. I'll never forget him, and I'm glad to know he's still around, saving people and dogs.

I can second that!

Carlo Mastromattei is one of the finest and nicest cops that work Revere because he knows Revere inside out.

A hell of a better cop than most on the MSP.

Dogs are better than most people

Dogs are better than most people. I'd say let's see how Elias likes to be chained to the same steel rod at the edge of the beach.

In other Revere news

Blue Line chowderhead commandeers Blue Line intercom, lets his inner racist out
Hobbesian battle erupts on Carson Beach; numerous arrests made at Revere Beach
Guys in ski masks start fights at Revere Beach
Dolla Store in Reveah
Florida man charged with trafficking two women out of hotels in Revere and the Seaport
State Police say man leads troopers on chase from Revere to Everett casino, then gets out and tries to fight them