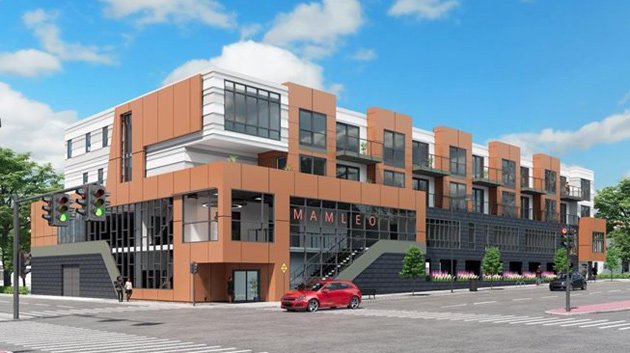 The Massachusetts Association of Minority Law Enforcement Officers wants to replace the old Columbia Road house it has long used as its headquarters with a new $15-million building that would include 45 "compact" studio apartments aimed at people 55 and older.

In a filing with the BPDA yesterday, the association said the new building at 61 Columbia Rd., at the corner with Seaver Street, would include a 200-seat auditorium, a smaller auditorium and office space.

MAMLEO said the building is designed both to give the group more room and to bolster its income through the rental income:

The proposed project would solidify MAMLEO’s financial future through income-producing features. Firstly, the applicant plans to rent the main auditorium for weddings and corporate events. Secondly, the applicant plans to rent the small conference room for local activities (e.g. karate, dance). Thirdly, several of the offices will be rented, likely, at reduced rates to complimentary organizations. And, lastly, the residences will be 55+, ideally occupied by MAMLEO’s own constituents. Through these, MAMLEO will be capable of financing and maintaining a building of this caliber, and further its mission.

Six of the units would be rented as affordable. The studios would be between 400 and 430 square feet under the city's "compact living" pilot. The proposal calls for 4,272 square feet of "amenity" space required for residents under the pilot, but does not specify what it would be used for.

The building would have 32 parking spaces.

The group's filing says the building's color palette was set to match that of a brick apartment building across Columbia Road:

The architectural massing takes cues from its neighbor across Columbia Road: a 4 story, red/brown masonry structure with inset balconies. The design team believes that by matching the neighboring building’s color tone and scale, a gateway will result - positively identifying the intersectional significance.

MAMLEO estimates construction would take a year and that it hopes to begin the work by mid-2021.

If MAMLEO is the landlord, do they pay property taxes? Or are they exempt like the universities?

From other articles, it seems that non-profits can become commercial landlords by developing property that had nothing to do with their mission and not have to pay any taxes on either the property or the income. Is that correct? And if it is why? It doesn’t strike me as right.

MAMLEO is a charitable organization

So, yes, their current HQ is tax exempt. I'm not a lawyer and I've never looked into something like this, so no clue whether they'd have to pay taxes on the housing part of the building (but I do know that for-profit buildings owned by non-profits that have nothing to do with the groups' core functions are assessed property taxes).

The apartments probably are subject to taxing

I know of religious organization where the church is located in a building that also rents out as apartments to the general public. The property itself is owned by a corporation. Based in city tax rolls the corporation pays property tax on the building. I assume that the area of the building that is devoted to church activities is somehow not taxed. But property tax is paid on the rental residential units.

the Boston Police Patrolmen's Association doing something like this and obviously, I can't.

This is a very good thing.

Good for this group to give back a little, and help their org raise funds (via rent)

Read the story MAMLEO has nothing to do with The Boston Police Patrolman's Association.

Right, that's the point they were making.

just add a cannabis store and an electronic billboard (because they need the revenue subsidy).

Both of which would need zoning-board approval

Which means if you really care, you get to go to a public meeting and then a public hearing to express your displeasure.

I bet they're gonna go for some of that sweet sweet 5g love and special sauce.

Call me cynical, but I don't

Call me cynical, but I don't see any community benefit here. This organizations wants to replace their own headquarters with a much bigger building and 45 "compact" units (which will certainly require a ton of zoning variances) because they sit on valuable land. They want 'compact' units because there are more units for them to rent and they can make more money than if they were 'standard' units. Finally, they say "several of the offices will be rented, likely, at reduced rates" Note the word 'likely' in there.

So, again, this is an org that has a nice piece of real estate (on which they probably don't pay taxes) and they want to rebuild--nothing wrong with that. But to finance the re-build & to give the org more money, they want to add "compact" apartments, which they can rent at market rate. Why should the city be giving them these massive zoning variances? What's the community benefit here? Also, I thought we all finally agreed the sole purpose of microunits is for the land owner/developer. It won't lead to reduced rents and therefore doesn't benefit the community!

Why not just let them do it.

Why not just let them do it. If people don't want the units, they will be empty, and the LL can lower the rent or have empty units. Better than just wailing, "ohhh me, our problems can never be solved!" Yeah yeah everyone wants a suburban house with a white picket fence... So let the market prove the developers wrong. All the hand wringing is SURE to drive up the cost of the units.

Because there is serious demand for these small residences among the cities existing senior populations.

The community benefit is stabilizing populations in the area by giving them somewhere to go as they age.

If they are restricted to 55 plus, they won't have the same rent as other units in the area.

And if you don't think the demand is there for senior studio apartments, check out the waiting lists for similar units in the Boston area.

You guys understand that

You guys understand that saying "we only want to rent to community residents 55+" is in NO WAY enforceable, right?

The first day the building opens, they could literally say, "we've found that the senior community isn't interested in our compact units. So we have pivoted to offering them to anyone in the community (ie. 18-25 year olds)."

Our city does NOT have legally-enforceable deed restrictions for things like age...and developers know this! That's why they're currently claiming it will be for 55+, because they think it's their best chance to get it through neighborhood meetings & zoning review.

It is COMPLETELY enforceable

I don't know what hole you stuck your head in 30 years ago, but there are special rules for building over 55 complexes and those restrictions are enforced.

For example, my husband is nearing 60 and I am turning 54 in a couple of weeks. That opens up our options for retirement or even just residential property. Couples with one over 55 and the other over 50 can live in 55+ restricted housing, but younger people cannot.

Oh, and let's be honest: what college student or recent college grad is gonna want to rent from a bunch of cops?

You are a cynic.

You know if this was some big developer who sat on a vacant lot until the BPDA bent. But its not. Gosh for bid some organization uses the same loop hole as big developers.

Also we NEED more housing. So fine, we can let a single unit home sit on a lot that can have more units. Good call. It can just sit there and rot.

This is why we can't have nice things

I'm 100% for more housing and I even like the design. My point is simply to ask them to adhere to zoning, just like EVERYONE ELSE in the city. Instead of 45 microunits, require 28 (or whatever the number is) of standard apartments. If they agree, I'd fully support this project.

We all know this city needs additional housing, but I hope you realize that you're being played whenever building plans call for either 'micro' units and/or say they'll be rented to a minority or disenfranchised group in order to get zoning variances. There are a slew of buildings where this city has been burned on those promises.

Compact is fine under zoning

They will need to detail just what sort of "amenities" they will be providing residents, but the point of the "compact living pilot" is to allow such units in an attempt to create more affordable units. They don't need a variance for that. They will need a bunch of variances (look for "Variances Required" in their application), but for things such as density and setbacks, not the size of the units.

adhere to zoning, just like EVERYONE ELSE in the city...

When was the last time they made ANYone adhere to zoning?

You just demonstrated that you don't even know how zoning works for 55+ developments.

What I don't like about this is I'm almost old enough to qualify for senior housing.

It sounds like there may be some shenanigans in the details (tax impact, zoning), but I like the idea of combining elder housing with a stable, civic institution (schools, day-care, or even a police station).

I earlier thought this proposal was for a police precinct. Just realized it's the organization hq. Still seems like a good idea.

I have an idea

They could rent those apartments for cops to rest after "working" 12 hours of details on top of their regular hours.or they could use the mailing addresses for the residential requirements for Boston police, they dont have to use Aunties address anymore, leave her out of it. :)

They have $15 million to

No, they probably don't

They're probably financing the construction, with proceeds from the rentals as collateral. It's not like this is some novel idea.