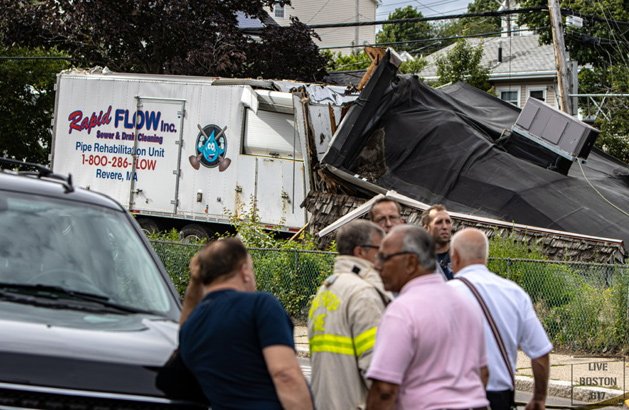 Winthrop Police report a man who stole a plumbing truck in Revere, drove it into a house, leveling it, ran away, shot two bystanders - one of them a retired state trooper - then was himself fatally shot by a police officer, around 2:40 p.m.

A preliminary investigation indicates that the male suspect allegedly stole a box truck owned by a plumbing and drain company and then crashed into a residential building on Veterans Road. Following the crash the suspect emerged from the truck and fled on foot. At some point shortly thereafter, the suspect, who was armed with a firearm, is believed to have shot the two adult victims.

Police say the male victim was declared dead at the scene, at Shirley and Cross streets. The woman was transported to a Boston trauma center, where she died. The suspect was also taken to a local hospital, where he died.

This evening, area police and firefighters formed an honor guard on the route from Winthrop to the state medical examiner's office on Albany Street in the South End as the retired trooper's body was brought there.

Neighborhoods:
Winthrop
Topics:
Crime
Ad:
Like the job UHub is doing? Consider a contribution. Thanks!

A lot of gun licenses were issued during covid

And probably even more guns bought. I’d expect to see more random road rages like this (although it seems like it involved a stolen vehicle and a retired trooper?) in the future.

This was not road rage if it

This was not road rage if it was a stolen truck.

From March: Americans Are Spending Their Stimulus Checks On Guns

“Stimulus check equals gun money,” said Brandon Wexler, owner of Wex Gunworks in Delray Beach, Florida. “I do anticipate that when people get a stimulus check they will spend it on firearms, accessories, high-capacity magazines and ammo, if they can get it.”

In my experience, people who go through the laborious, exhaustive process of getting an LTC in Massachusetts are serious and law abiding. Elsewise why would they subject themselves to that level of rectal examination?

I don’t see them as candidates for gun waving road rage lethalities. And most LTC’s are issued as non-concealed carry.

Likelier we’ll see a wave of used guns on the (legal) market once the hysteria ends and they want 40% back on what seemed a good idea at the time.

According to the Erin Tiernan Twitter thread linked by Brian below:

[gunman Nathan] Allen was licensed to carry, but was not on any radar and had no record, Rollins said.

Actually there were two/2 events that unfolded over several blocks/streets -- 1) Suspect driving the stolen truck collided with SUV at intersection of Cross and Shirley Streets. People ran out of their homes to assist, the 2 people in the SUV were okay. 2) Suspect continued down Shirley onto Veterans Rd. where he crashed truck into building/leveling it. Again people heard/felt crash ran out to help, many then said they ran back inside as shots fired/ran for cover.

Unconfirmed whether the two/2 people who were shot were random/offering assistance in or the case of the retired state trooper trying to engage the suspect/subdue him, et al. My mother actually missed the incident by a short 10-20 minute window as she was coming home from an art event in the area, but she turned onto Veterans/was there around the same time.

Condolences to all--and thanks to all the first responders Police/EMT/Fire both Winthrop, Revere, Boston and Massport--they sent fire to help. Metro North our contractor 911/provider not so much--citing girl on WHDH7 who said they basically hung up on her--and yes I believe her from past experience with them. And WHDH 7 provided onsite coverage which was pretty comprehensive...I counted three 3 reporters all here last night/from their TV updates. There are also photos on local/public Facebook groups showing the shooter. I presume there will be more video from surveillance cameras. This area is mixed residential and commercial, Veterans Rd., especially--home to several car repair businesses.

The State Police/emergency vehicles drove by about 8pm last night on the escort of the former Trooper's body. And I did hear the sirens earlier in the day but I thought perhaps they were en route to MWRA/Deer Island--which happens from time to time/when there are incidents out there.

To be noted--no small american town adjacent to the city or not is immune from gun violence. We have had some prior incidents in Winthrop, and no doubt it will continue.

Although the culture of running outside to help -- may sadly end as people may fear for their own lives/being shot in the cross fire.

This was alreay a messed up situation

with the facts & circumstances we already knew, and now this thread from the Herald's Erin Tiernan reporting from a press conference this afternoon with DA Rollins.

“He walked by several other people that were not Black and they are alive, they were not harmed,” [D.A] Rollins said. “They are alive and these two people of color are not.”

His diary seems to confirm

His diary seems to confirm that.

In other Winthrop news

People moved out of Suffolk County after the pandemic hit
Race for DA could be referendum on Rachael Rollins
Acting DA wants to remove 'acting' from his title
Arroyo to run for DA
It's official: Lydia Edwards is now Senator Elect Edwards
Baker names replacement for DA Rollins