Advertising company sues over South Station construction; says it shouldn't have to pay for ad space nobody can see due to skyscraper work 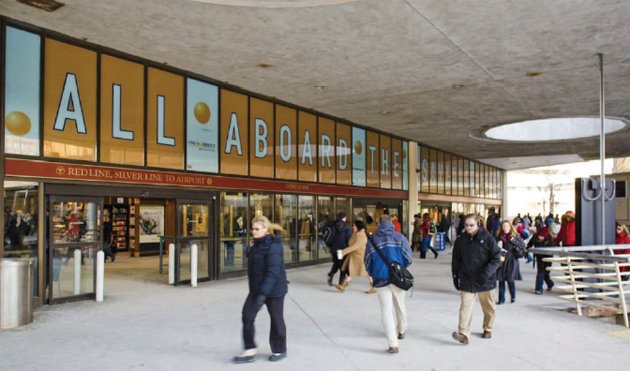 Remember this? Hard to see when it's mostly covered with construction stuff, company says.

Clear Channel today sued the New York-based company that runs leases inside South Station, demanding it be freed from paying a minimum of $500,000 a year for the right to hoist banners and signs inside a station with so many sight lines now obscured by construction of a 51-story office, residential and hotel tower.

In a lawsuit filed in US District Court in Boston, Clear Channel says it owes Ashkenazy Acquisition Corp. substantially less than that amount under a clause in its contract that the requirement to make that minimum annual payment "is suspended until such obstructions are removed," something it says might not happen until completion of the project in 2026.

Since January 27, 2021, many of Clear Channel’s advertising locations in South Station have been obscured, blocked entirely, or otherwise materially adversely affected by construction and renovation activity related to the South Station Air Rights Project, a planned multi-year expansion of South Station including a renovated rail and bus platform and a new, 51-story mixed-use tower atop the landmark station.

As an example, Clear Channel points to the "Exterior Window Spectacular, which formerly consisted of a series of large windows that riders getting off trains couldn't help but notice as they entered the station:

Most of this display has been blocked off since January 27, 2021, and since at least March 2021, 80% of this valuable advertising property has been completely covered up by scaffolding, barriers, and other construction equipment erected as part of the South Station Air Rights Project. Today, four of the five sections (i.e., 64 out of 80 panels) of the Exterior Window Spectacular are entirely blocked off; the one remaining section cannot be seen from the east side of the train platform due to the construction zone and is in a state of construction- related disrepair. Until recently, even that one remaining section of the display was covered by a plexiglass barrier erected as part of the construction. While that plexiglass barrier has since been removed, exposed wires and loose insulation above and in front of the display continue to diminish the visibility and attractiveness of the display; AAC has disregarded Clear Channel's repeated requests to fix these issues.

Clear Channel says it has been unable to find anybody willing to pay premium, or any, rates to advertise on the space since construction began in January, 2021.

The company wants a judge to order Ashkenazy, which also handles leasing at Faneuil Hall Marketplace, to stop pestering Clear Channel about payments until all the ad spaces are once again clear.

I want to read the entire complaint but it does seem like they have a point. The outside panels are for all intents and purpose gone so they should owe much less.

Read away! It has some other examples of how their ads can't be seen anymore.

Clear Channel defaces the community with their billboard blight

They deserve each other.

They didn't sneak in one

They didn't sneak in one night and put up the billboard without permission. Ashkenazy sought them out, and the T allowed or encouraged it.

Yeah, you have to have really messed up

to make me side with the billboard company.

they have the name ClearChannel.

(Not part of the media company anymore, though)

Ashkenazy Group may be scumbags.

But Clear Channel wrote the book on scumbaggery, so...

I agree with the billboard

I agree with the billboard company but I do have to wonder what their contracts say? Is it possible they penned multimillion dollar multiyear contracts that had no clause for obstruction?

I think the billboard company should not have to pay. Also they have a contract and have built their company around having access to contracts like this. They should be entitled to some damages as well. If they are paying a dollar for rent , they must be reselling the space for lets say $1.30 , which would mean they are not only losing the dollar but also that profit which they presumably pay for staff and other things with.

The contract anticipated this

Adam wrote:
"a clause in its contract that the requirement to make that minimum annual payment 'is suspended until such obstructions are removed' "

Where's the crowd funding site to keep the ads covered by scaffolding, fencing, etc.? The place is a painted lady and not as pleasant as it could be due in part to Clear Channel's efforts.

The last of the storm moves out
Man stabbed in the neck near State and Congress downtown
New Hampshire man gets to fly his 'Christian' flag over City Hall Plaza tomorrow as City Council begins work to ensure he can never do so again
More trouble at old Government Center Garage site: Four-alarm fire
This isn't Times Square on VJ Day and you can't just grab some random woman and kiss her, man learns on the Green Line
Kid learns train conductors can ask his shorty where she's heading