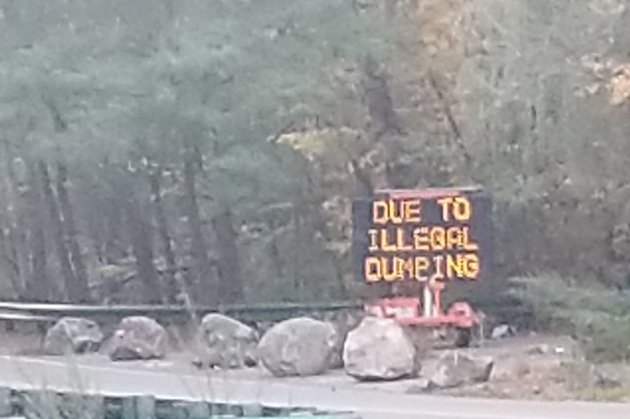 No more woods for you! Photo by JPYuppie.

Update: State rep says the lot will be re-opened today.

DCR, which has been hauling boulders into Stony Brook Reservation for years to close off parking space, this weekend shut off access to a small parking lot on Enneking Parkway that provided access to the main paved path that circles around the reservation forest and Turtle Pond.

The shutdown means that people who use the path will have to park across the street, near the ballfield - at least until DCR shuts that down as well. This new configuration could mean problems for slow walkers, people in wheelchairs or people with strollers, since drivers heading into Hyde Park from the four-way stop tend to zoom around the curved road, making them hard to see - or escape - until they are almost on top of you.

For more than a decade now, DCR's answer to littering and other problems in the 475-acre reservation has been, no, not to try to deal with the problems head on, but to block off parking lots and even just widened parts of road shoulders where people might pull in in an attempt to enjoy the woods. Enneking, Turtle Pond and Dedham parkways are now lined with boulders, except for one former parking area on Dedham Parkway, where DCR tossed in an old tree trunk as well.

There has been a growing problem with people dumping piles of trash in the parking lot and idling in the parking lot for long periods of time, but most of the users are just there to walk the trails. There is a parking lot across the street and down a bit, but it is very difficult to make the crossing without risking your life, especially with dogs and a stroller. And there isn't really anywhere else to park to get to that paved portion of the trail system, so Bostonians looking to take a walk in the woods with a stroller or wheelchair just lost a major resource. Thanks DCR.

According to the Stony Brook Reservation group on Facebook, DCR blocked the parking lot but didn't clean up the trash it was upset about.

Thanks for the info Adam

No remotely civilized people want our beautiful lands dumped on, it would make more sense and be more productive to film the dumpers to actually catch them. Just put up some not-obvious (so they don't get ripped down) cameras.

Prior to this incident of illegal dumping (the items dumped seem to belong to one person who has been identified), the lot had been maintained for a year by volunteers who removed trash weekly and tidied up every few days.

In fact, after volunteers lobbied for trash bins, DCR said no but pledged to clear trash collected by volunteers weekly and to respond swiftly if volunteers requested trash get picked up. They were made aware of the dumping but didn't respond which contributed to additional dumping.

DCR (and others) complain about waste at the small parking areas in the Fells but DCR refuses to put out but a few barrels so people just leave their trash. It’s naïve to expect people to pack it out in an urban park.

Residents have begged for DCR to put crosswalks and/or traffic signals on South Border Rd because people really speed on that road. DCR responds that the “high speed of traffic” is why they WON’T add a crossing.

It’s really infuriating to have marked trails cross a road but no designated pedestrian crossing.

I don’t know if DCR is woefully underfunded or just a textbook example of mismanagement and competing priorities. Probably both.

The idlers are dudes looking for extra-curricular activites.

Creepsters who cruise people just trying to walk their dogs. Having a cop roll through there every couple hours isn't asking too much, is it?

And as far as the trash; those barrels are more often overflowing, damaged, and knocked over. DCR cannot be relied upon to open the gates on time (if at all) so expecting them to work is out of the question.

This falls entirely on the staff and the middle/upper management who tend not to like getting out of their trucks or leaving the office. It's plausible deniability when someone asks "what exactly tf do their people do all day?".

It’s naïve to expect people to pack it out in an urban park.

It's easier to pack it out in an urban park, where you don't have far to go to get to a legal disposal option, than it is in the backcountry.

Cater to pig behavior and people will be pigs.

Perhaps they should pack it out but they don't. So the options are the make it easy for them to dispose of it property or accept lots of trash on the ground and yell into the wind.

See Cybah's comment below. If you make it easy for people to do the right thing, most will. If you make it too hard they'll just ignore the regulations outright and we'll have a bigger problem.

Voluntary compliance is much easier and cheaper than active enforcement.

There is a huge issue with illegal dumping, not to mention there was some guy living in a bus parked there for half the summer.

This is part of a bigger problem. Trash disposal.

You know, maybe if we stopped being nit-picky about trash or having cities and towns have their own regulations.. maybe if we did a "we will accept anything, no questions asked" and let people do that. Maybe we wouldn't have so much illegal dumping.

Illegal dumping most often occurs when people do not have a place to dispose of trash. Sometimes its items that most city trash pickups wont take like tires, pallets, and now matresses (this is new rule). People want to dispose of it, but no one will take it, so it gets dumped anywhere it can.

I think the behavior sucks but we aren't helping the situation by having trash policies that won't take anything. And are getting more restrictive.

We have a choice.. having trash policies that take anything and its the trash folks that need to sort it out. OR we can just have overflowing trash bins of household trash and areas that are just informal trash dumps.

Other countries don't seem to have this problem.. but they a) ban sh*t that shouldnt be in trash anwyays b) No questions asked trash pick up, and its properly disposed off

Why is this so hard?

They make it IMPOSSIBLE to throw anything out without charging exorbinant fees or simply banning certain items so THEIR OWN RESIDENTS have to dump chemicals and fuel and god knows what else anywhere they can.

Some North Shore towns charge $5 a bag for anything that doesnt fit in ONE trash barrel.
FIVE! DOLLARS! PER! BAG!

It's very similar to the opioid epidemic and surrounding cities sending Boston their problems.

Make it as hard as possible so someone else has to deal with it or cannot afford it and has to move.

This is why suburbs exist.

It's also true for household chemical disposal. I'm not sure about Boston but in Medford you've got to take it to Lexington and pay a tidy sum to dispose of it. So most people just toss it into the trash or pour it down the drain instead which is far worse for the environment.

The better option is to charge a disposal fee when the item is purchased, not when it's trash.

Hazardous wastes are challenging to get rid of. Towns like Lexington charging for non residents isn't the problem -- its that other towns just won't provide an option to their taxpayers.

You can drop off all kinds of things for free, I think they are every 3 months, plus maybe some bonus days in the summer for certain things.

This most likely isn't an issue with someone who just bought a single mattress and don't know what to do with it. In reality, Boston, where this parking is located, is pretty generous with trash removal, with some items requiring a call or e-mail to get them picked up.

No, if this is the level of dumping where DCR is concerned, this is most likely some business concern deciding that leaving their trash at the trailhead is somehow acceptable.

Overall, I do not understand why DCR has been committed to reducing access to Stony Brook Reservation. They put stones by the parking across the road when we thought (erroneously) that having a bunch of people nearby and outdoors would spread Covid, yet they were very slow to remove them (are they even removed?)

No, if this is the level of dumping where DCR is concerned, this is most likely some business concern deciding that leaving their trash at the trailhead is somehow acceptable.

I never said this was for household trash only. I probably should have mentioned that it is businsesses too.

Same argument applies. Trash is trash, no matter where its coming from. And commercial trash removal is even worse, because unlike the convience of household trash removal, businesses have to pay for it out of pocket. THEN be told that there are restrictions and be prepared to pay more for hazardous chemicals or 'bulk trash' (i.e. tires, etc)

We need to stop thinking in silo's.. that are "well you're a business so you can pay". Trash is E V E R Y O N E ' S problem, regardless of the source, especially when it's dumped somewhere

So again, why is this so hard and why can't we think bigger about this issue.

it's about will, not capability

DCR is perfectly able to maintain trash cans spaced 200 feet apart on the SW corridor. I don't buy their excuses. Someone high up in their structure just doesn't want to deal with Stony Brook and it trying to do a classic GOP-style "let it decay until they close it down" move here.