The Great Migration and the rise of Black hairdressers in Boston 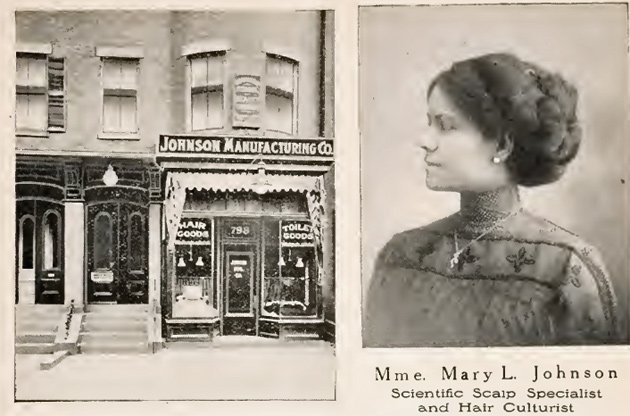 Mme. Johnson and her hair-products store at 798 Tremont St. in Roxbury.

The Boston City Archives continues its series of interesting tales from the voting roles of Boston women in 1920 with a look at the rise of Black hairdressers in Boston during and after the Great Migration of Blacks from the South to Northern cities.

Black men were able to secure such jobs in the north, but Black women remained restricted primarily to employment in domestic service. Unfortunately, domestic workers faced long hours, low wages, little control over work routine, and no room for advancement. It is no surprise, therefore, that Black women sought employment elsewhere.

Among the more successful Boston hairdressers was Mary Johnson, who, with her husband, Dr. W. Alexander Johnson, created a sort of hair empire that soon extended from just doing hair to creating hair products that she sold nationally to establishing a a "beauty culture" (what we'd call cosmetology) school. And no matter that when she registered to vote in 1920, Boston officially recorded her as "housewife."

Mary Johnson, born in Louisiana around 1880, met her Southern-born husband here, and started their "hair food" concern in 1900.

The image at the top is from the 1915 program of the National Negro Business League's convention in Boston, held Aug. 18-20 at Convention Hall at St. Botolph and Garrison streets - which still stands, although it's no longer used for conventions.

Alexander Johnson played host as president of the Boston Negro Business League. The Johnsons took out a full page in the program that included: Neighborhoods:
Roxbury
Topics:
History
Ad:
Like the job UHub is doing? Consider a contribution. Thanks!

Thank you for sharing this.

Our small town history has so many nuances...

This time period also coincides with the Harlem Renaissance, which is when Martha's Vineyard started to become a destination for people of color.

They are not related to the Johnson's that founded Afro Sheen Products (Johnson Products Company) and established the first African American owned company traded on the stock exchange (JPC).

So a guy drives to Madison Park High School with two guns in a locked bag in his car and the guns get stolen
Chompy table-flipper sought for attack in Grove Hall restaurant
ER, critical-care, neo-natal and other nurses sue Beth Israel hospitals for firing them after they refused to get Covid-19 shots
Another transgender-related bomb threat at Children's Hospital
Remember the bad old days on the Orange Line when doors wouldn't work and they had to take the entire train out of service?
The Goofus and Gallant of Jamaicaway sporting events