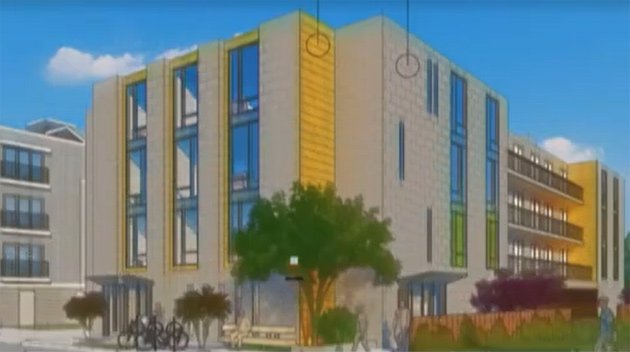 The owner of 3 Dana Ave. in Hyde Park yesterday sued the Zoning Board of Appeal for approving variances for a 27-unit apartment building next door, saying there's nothing odd enough about the lot to warrant overruling its zoning and that the owner has done a terrible job with landscaping another apartment building he put up on the other side of the lot.

In its suit, filed in Suffolk Superior Court, the 3 Dana Avenue Realty Trust, Joyce Michaelidis, trustee, says it is also worried the building would mean chopping down large trees in a 2.5-foot-wide strip between its building and the building where Milan Patel of Salem wants to put up his new building.

The vacant house Patel would tear down, two of the trees and the trust's property this afternoon: Patel owns the land the trees are on, but in a separate suit filed in Land Court in May, 3 Dana Avenue is seeking to take ownership of the strip of land by adverse possession - saying it has taken care of the strip for at least 20 years, mowing and reseeding it and even putting up a chain-link fence on Patel's side of the property line - and that neither Patel nor previous owners had ever done anything to contest that.

This week's suit asks a judge to overturn the zoning board's 5-1 vote on Oct. 4 to approve variances for a 27-unit building with 30 parking spaces - steps away from the parking lot for the Hyde Park commuter-rail stop. The variances are related to the parking spaces, some of which would be in a mechanical stacker system, not because of the number of proposed spaces and to the configuration of the proposed building's loading dock.

At the Oct. 4 hearing, Patel's lawyer, John Pulgini, said the parking variance was needed because city zoning code has yet to catch up with the technology of mechanical stacking systems.

But in its suit, the neighboring realty trust says variances are only supposed to be granted because of extreme hardships caused by such factors as the slope or configuration of the lot, and the lot is rectangular and flat, it says. Also, the building sits in a "neighborhood shopping" district, where the first floors of buildings are supposed to be for retail uses, not parking.

The trust also says neither it nor other neighbors trust Patel to provide decent landscaping for the building, let alone what is shown on his renderings, because his earlier building, at 11 Dana Ave. has only concrete in front despite plans showing landscaping. Coupled with the potential elimination of the trees along the side line - assuming the trust loses its case - and that could mean reduced green space and tree canopy at a time when the city is trying to increase both, the suit charges.

The front of 11 Dana Ave. this afternoon: The BPDA board approved the project in June.

Correct me if I'm wrong

But isn't 11 Dana in Housing Court because the neighbors sued?

People should not be punished

People should not be punished for for making things look nice. I wish the neighbor who tended the grounds all this time owned the other lot as well.

They should rule to have the trees planted as shown in the renderings for the newly constructed building and allow them to build another building if it looks decent ( I think the first one uses materials to make the facade interesting) . Hyde park needs more foot traffic to improve the shopping district, which a new building would do ;) similar to rosindales condo boom 10 - 15 years ago Hyde Park needs some new residents looking to spend money where they live and not in Dedham.

11 Dana was built despite strong neighborhood opposition from the Hyde Park Neighbor's Assoc. which tried for several years to prevent it from being built. The ZBA is terrible and just rubber stamps ridiculous projects despite the neighborhood's opposition, e.g 1381 River St aka Junior's Automotive.

Maybe because the opposition is straight NIMBYism that should be ignored

"But in its suit, the

"But in its suit, the neighboring realty trust says variances are only supposed to be granted because of extreme hardships caused by such factors as the slope or configuration of the lot"

The reason the trust says such a thing is because THAT'S THE ACTUAL TEXT OF THE LAW CONCERNING ZONING VARIANCES. That's the legal basis for most suits against construction. It's because the Zoning Board is BREAKING THE LAW. Now, the law might be bad, or hindering construction, but it is still the law and there is no political constituency that seems to want to change that. The system where the unelected zoning board gets to pick and choose who gets to build what they want and who doesn't is too beneficial to too many people. Those with an in get to build maximally....everyone else gets stuck following zoning to the letter or not getting to build at all.

If you're doing a fly by night building by all means break promises, let shit get overgrown, and piss your neighbors off. But if you want to develop several parcels in one area, maybe think a little bit.