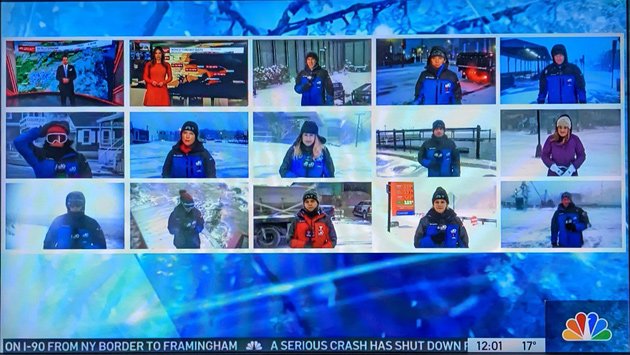 Bill Whelan noticed that a couple of the outdoor reporters at Channel 7 didn't look real happy: In Wrentham, Channel 7's Caroline Goggin had a whole bunch of Dunkin' Donuts cups with which to measure the snow. Around 11:15 a.m., she was dusting off the top of her fifth stacked cup: In Lynn, WBZ's Anna Meiler only had one Dunk's cup, but after a nearby viewer noticed it was empty, he brought over a mug and a Thermos full of hot coffee: Channel 7 reporters took differing approaches to showing viewers that it's windy out there. A snackless Steve Cooper in Sandwich used the classic Shelby Scott move of leaning into the wind (screen capture by Tim): Up in Scituate, though, Jonathan Hall used a plastic trash bag: Reporters and weather people kept saying how hard the snow is to measure because of all the wind and drifting. NBC Boston, though, has customized yardsticks - which makes you wonder if they sell them in their gift shop: Some reporters tried making snowballs on air, but were foiled by just how light and dry the snow is: Channel 7 's Dan Hausle reported live from somewhere outdoors, wearing camo pants left over from that time he covered a bloodbath in an Oreo factory, apparently (screen capture by Tim): WCVB's David Bienick had a shovel, too, as he stood on Quincy Shore Drive, near the yacht clubs. But instead of mini-plowing, he used his to point to where Boston would be, if it still existed. And then, he went into a batting stance and brought us along as he pretended to be at the plate at Fenway aiming for the Green Monster, only even in his imagination, he could no longer see it because of all the blowing snow. I'm proud of myself

I haven't watched 2 seconds of the ridiculousness on the local news.
It's the same every storm.

The thrill is gone

I think part of the whole storm thing is watching the news and seeing everyone blow away, it’s funny. I find it part of the day, j ust as much as making food and drinking coffee.
I love to see the excitement in Harvey’s eyes, like a kid on Christmas.
Gaffin>I also really appreciate the acknowledgment of Shelby Scott. There was only one. #neverforget

With the multitude of channels and programming we have in today's on-demand culture, I'm surprised anybody watches a second of this outdated garbage. The chutzpah that they have to call it "news" is flabbergasting. My suspicion is the demographic watching it skews older. The seniors who have a warm feeling for Shelby Scott, the mother of this nonsense.

Nielsen claims they get views

Nielsen claims they get views. Numbers for local stations are in the tens of thousands of viewers per week. It's sort of an echo chamber but nobody really knows how many seniors leave the TV and fall asleep. If you notice places like gas stations and grocery stores have this crap playing 24/7 driving up the numbers.

As someone who is "older"

I suspect the demographic skews younger. Or even older. Definitely nowhere near me.

This is what "storm coverage" boils down to...

You have summed it up perfectly

It's all for ratings and ad revenue

All of these gimmicks - the tag team weather forecasters and the Brady Bunch/Hollywood Squares reporting - is all done for ratings, which in turn the stations can charge higher prices for ads.

I remember when you had to step outside to experience winter.

Chronicle is still the king of local news

The forty year special last night was a tribute to the best of local news in New England.

I have a running joke with a friend of mine where we use North Korean speak and say, "Storm Team coverage is best coverage!"

He's from here but lives on the west coast now so I sent him a picture of the tv similar to the top one on this post. His reply was, "The last thing I want on the weekend is to watch TV that looks like a Zoom meeting."

I too find it to be absurd oftentimes

but someone must be watching it.

Whatever happened to Plum Island?

Strangely, this time around I didn't notice any references to Plum Island, that mysterious Brigadoon that only exists when it snows, at which time it becomes the barometer and epicenter of all thigs blizzard related, only to then return to it's native nothingness. I guess it just wasn't a big enough ratings generator now that these windblown "newscasters" have so many bells and whistles to measure the snow with.

I don’t see how these local news shows are any different than uhub; I count 10+ posts which can be boiled down to “it’s snowing a lot”. (I am not complaining, just observing.)

They must get good ratings or they wouldn't do it. It's understandable during a tornado warning (you should be in your basement, not watching Jeopardy!, you idiot!!) but this is way beyond overkill. And I'm a weather nerd!

I thought I'd miss a basketball game I'd been anticipating all week, but luckily WBZ put their regular programming on 38. And the good guys won (GO GREEN GO WHITE!) :).

This is why the only place I

This is why the only place I get weather news is from Dave Epstein's twitter. No bullshit.