Police say West Roxbury man crossed the line - into Brookline, to break into a construction site 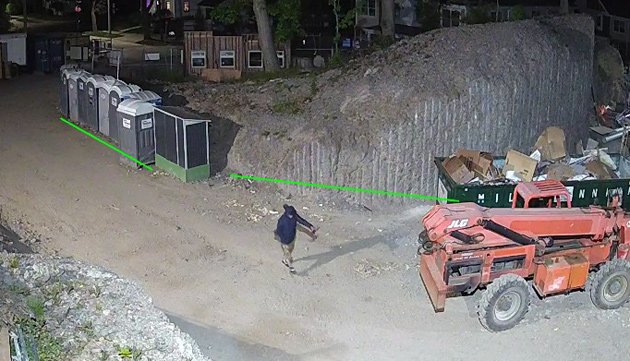 Brookline Police report arresting a West Roxbury man they say they caught rummaging around the Independence Village expansion project just past the town line on Asheville Road early this morning - and that a Brookline officer and a Boston search dog suffered minor injuries in the pursuit.

Police add that Terrence Kelley, 47, may be wanted for other break-ins in the area off Independence Drive and VFW Parkway, both earlier this month and last fall.

Police say that shortly after 2 a.m., a security company with cameras at the site alerted them it was "watching a white male wearing a dark colored hoodie and camouflaged shorts" who had just entered one of the buildings under construction there.

Brookline Police, and a Boston K9 unit, set up a perimeter:

Shortly after the arrival of the K9, Brookline officers observed the suspect inside the building through a window, and were able to apprehend him as he tried to flee the site on a scooter.

During the search for the suspect and due to the hazards of the construction site, one Brookline Officer and the Boston K9 sustained minor injuries.

Kelley was arraigned today on charges of breaking and entering in the nighttime and trespassing in Brookline District Court, police say.

Maybe he just needed to use the facilities?

What I see is someone walking away from a row of porta-johns.

Sometimes a picture isn't worth a thousand words

If you read the text, he was initially spotted going into a building, not a porta-potty.

In other Brookline news

Kosher pizza place in Brookline is closing
We're going to read about people heading to the US Open winding up in Needham, aren't we?
Brookline encouraging US Open parking in Boston by banning non-resident parking on dozens of its streets near the Country Club
Security guard at the Country Club dies in apparent fall days before big golf tournament
4-year-old drowns in Brookline pool
Citizen complaint of the day: Boston Calling making windows rattle, babies cry for four miles around