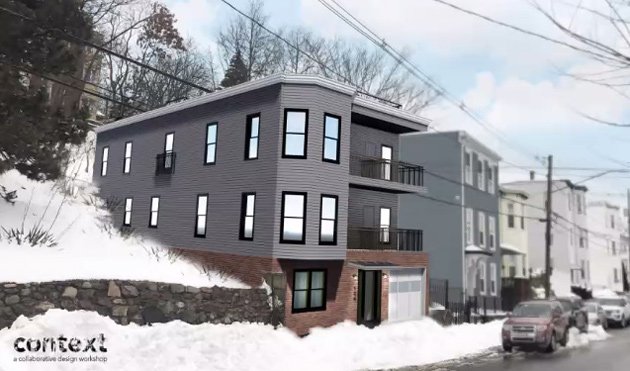 The Zoning Board of Appeal yesterday approved a total of seven new residential units in East Boston while rejecting six.

The board approved a six-unit, four-story building on East Eagle Street that will replace an existing triple decker.

The board also unanimously approved plans for a four-unit, three-story building at 124 Leyden St. that will have four parking spaces. The building needed board approval because the zoning on the lot called for no more than 2 1/2 stories, the rear yard was not long enough and the lot was too small. Board members agreed that the building would fit in on a block of mostly triple deckers, that the total height of 31'6" was lower than the allowed 35 feet and that the rear-yard length was OK because the lot runs all the way through from Leyden to Breed Street, up a steep hill. The proposal was also one parking space short of the requirement, but board members said four spaces was adequate in part due to the lot's proximity to the Orient Heights Blue Line stop.

Both buildings were denied without prejudice, which means developer Joseph Trichilo can try again within a year - with smaller proposals.

Technically, the board also approved the expansion of a three-family house at 169 Maverick St. to four units. However, that vote was simply to re-affirm approval granted in November; the extra vote was needed because the public notice for the November hearing left out one of the reasons the project needed zoning relief.

The ZBA feels like it has been the "East Boston Unplanning Department" for the past decade or so. Here's hoping someone tracks the longevity of these buildings in about a decade and a half.

Has never shoveled snow. Otherwise, there would be at least a small space to access the house from the street.

and where are the space

and where are the space savers?

This would never fly in...

All I can say is, I hope the Wu administration reads universalhub.com

Yes, ten new units were approved, but one of the projects involves tearing down an existing three-unit building, so the net gain is seven.

Really, these condos would be so much more useful in Roslindale. Roslindale is so low density, it's just screaming for more housing!

Hyde Park as well. It is

Hyde Park as well. It is screaming for more density.

Six-condo building approved on East Eagle Street in East Boston
Could be a whole lotta shakin' goin' on near the East Boston entrance to the Sumner Tunnel this weekend, state cautions
The Blue Line is a mess, the T is forced to confess
East Boston group sues state over its refusal to allow housing on waterfront land along Border Street
Serene night along the East Boston waterfront
East Boston health center hires ombudsman in face of continuing complaints over care