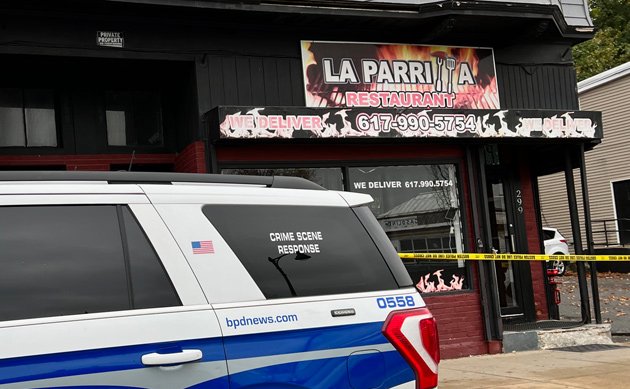 La Parrilla after the shootings (via Dorchester Reporter).

Diustin Cruz, the owner of La Parrilla, 299 Hancock St. in Dorchester, didn't appear at a licensing hearing today on a triple shooting early on Oct. 30 in what police say was an illegal after-hours club, where customers could order an entire bottle of liquor or take puffs on a hookah until the sun came up.

Police detectives, who did show up at the Boston Licensing Board hearing, say they haven't been able to find Cruz since the triple shooting, in which two people were shot in the chest and one in the leg around 5:50 a.m. One of the victim's injuries were serious enough that the BPD homicide unit was initially called in, just in case.

Police say Cruz might not have even been running the place the morning of the shooting, because they've found evidence he'd rented the restaurant to a woman in New York who in turn was letting her son operate the restaurant - and possibly the illegal after-hours club.

The restaurant has not been open since the shooting, police say.

Sgt. Det. William Gallagher told the board that when officers arrived at La Parrilla early on Oct. 30, they found a man shot in the back and a woman shot in the leg. Later, a second man showed up at the Boston Medical Center emergency room, also with a gunshot wound to the back, Gallagher said.

Police also found liquor bottles and hookahs in the basement - and evidence that customers could buy an entire bottle of hard liquor at once, something that would be illegal even at Boston bars licensed for table service. La Parrilla, which Cruz opened in 2016, was only licensed to serve food, not alcohol, and was not supposed to be open before 6 a.m., although its Web site lists a 9 a.m. opening time - and an 8 p.m. closing time.

Today's hearing was supposed to give Cruz a chance to issue a police citation for operating past its licensed closing time, serving alcohol without a license and for assault and battery with a dangerous weapon.

Gallagher said he and another officer tried to serve a copy of the meeting notice on Cruz at his Dorchester apartment, but the only trace they found of him there was some old mail - the apartment even has new tenants.

The board could decide at a meeting on Wednesday what to do about the citation. Its options include a warning, a license suspension or revocation.

What smokable substance can

What smokable substance can keep u up till the sun comes up while u drink won't make u want food or go to sleep? And not crack or meth????!!!!!