Shown today during an MLK commemoration.

Note the final shot inside the BLS auditorium scans across some of the hundreds of years of white male headmasters before the camera focuses on current Head of School Rachel Skerrit.

Eric Tran Thai, 36, pleaded guilty to two counts of possession of child pornography yesterday for incidents in which he would sit in a stall in boys' rooms at Boston Latin School and surreptitiously video students in 2017, the US Attorney's office reports. Read more.

Boston to get examless exam schools for one year 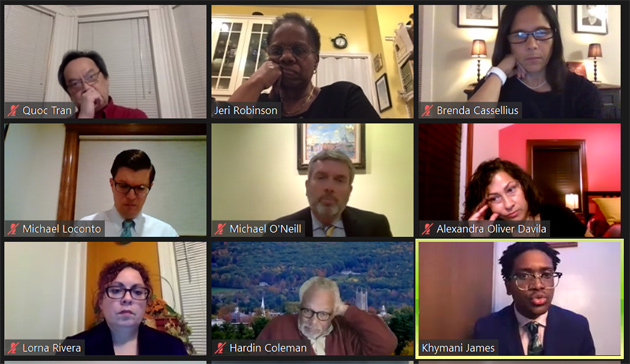 The Boston School Committee voted unanimously early this morning to suspend the use of an exam to decide who gets into the city's three exam schools for the next year because of a raft of problems brought up by the Covid-19 pandemic, in a meeting that lasted more than 8 1/2 hours. Read more. 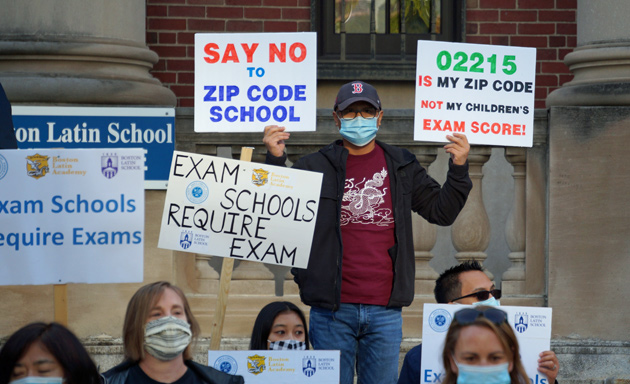 About 70 people rallied this morning on the steps of Boston Latin School in support of keeping an exam to help determine who gets into Boston's three exam schools next year, while across Avenue Louis Pasteur, about 20 people held a counter-protest saying it's time to ditch the test as a legacy of Boston's racist past. Read more.

Boston petitions: Keep the exam in exam schools, get the city to buy a wooded parcel in Roslindale

There are currently a couple of Boston-specific petitions circulating online: Read more.

WBUR reports BPS Superintendent Brenda Cassellius is proposing a one-year change for Boston's three exam schools: 20% of next year's seats would go to students with the city's top grades, while the rest would be awarded based on students' ranks in each city Zip code - with students in lower-income Zip codes getting first crack.

BPS screwed up: Denied exam-school entrance to 62 kids who qualified

The Globe reports all of them students incorrectly denied admission last year and this year have been offered seats at the schools they were eligible for, that the error cascaded down to affect other kids denied entrance to non-exam schools they had requested and that none of the students who were given seats who shouldn't have gotten them will have their seats taken away.

The Hollywood Reporter reports the death of the West End native, who took his father's chain of Dedham-based movie theaters and turned it into a media empire - after graduating Boston Latin School, Harvard and Harvard Law School, with a break during World War II to help decode Japanese military messages.

In 1979, he narrowly escaped death during a stay at the Copley Plaza when it caught fire.

The Bay State Banner reports the BPS's Opportunity and Achievement Gap Task Force unanimously urged a one-year halt on exams because of Covid-19 - just as some colleges are doing with SATs, two days before BPS announced it would be using a test from a non-profit testing concern.

BPS finds an exam for the exam schools

BPS last week announced it will use an exam developed by NWEA, an Oregon-based testing non-profit, for the city's three exam schools: Boston Latin School, Boston Latin Academy and the O'Bryant School of Mathematics and Science. Read more.

BPS makes entrance-exam change official: Asks for a new company to write the exam that helps determine who gets into exam schools

BPS today issued an RFP for a company that can write exam questions that will both ensure potential students are ready for the "rigorous" exam schools while also "furthering equitable access to the exam schools, particularly for Black and Latinx students who have historically been underrepresented." Read more.

The company that writes the ISEE exam that BPS has long used to help figure out who to invite to attend exam schools and BPS administrators are exchanging exclamations of "You can't quit me! I quit you first!" today. Read more.

The nation's oldest public school has replaced its old logo - which featured a representation of Romulus and Remus suckling at a wolf - with a 21st-century logo that features the current school building's facade and cupola but has no ties to the language for which the school is named, save the name of the school itself. Read more.

Judge revokes bail for man charged with videoing boys in Boston Latin restrooms; orders him locked up until his trial

A federal magistrate judge has revoked bail and "home detention" for Eric Tran Thai of Dorchester, saying she is convinced he poses too much of a risk of re-offending - or of fleeing the area - and ordered him held behind bars pending the outcome of his trial on five counts of sexual exploitation of children. Read more.

A clerk in US District Court in Boston yesterday released Eric Tran Thai to "home detention" as he awaits trial on five counts of sexual exploitation of children for the videos he allegedly took in Boston Latin School boys' rooms on at least ten occasions in 2017. Read more.

A Dorchester man faces federal charges of sexual exploitation of children for the 45 videos authorities say they found on his computer that show "male students in various states of dress using the urinals and stalls" in a Boston Latin School boys' room between February and June, 2017. Read more.

BPS could replace ISEE for deciding who gets into exam schools

A federal judge ruled yesterday there is nothing wrong with the residency requirements set by Boston Public Schools and that BPS was within its rights to rescind a boy's acceptance to Boston Latin School because his parents were unable to prove the family actually lived in Boston. Read more.

When a trolley and a bus love each other very much ... 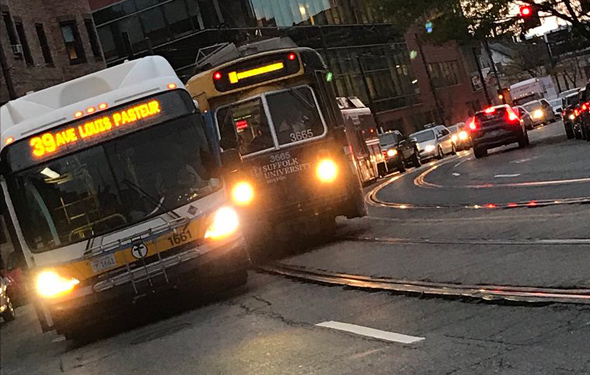 A 39 bus and an E Green Line trolley had a little love bump on Huntington Avenue near Brigham Circle shortly before 7:30 a.m. Lena, who captured the scene, reports there didn't appear to be too much damage, but that some of the Boston Latin School students on the 39 "charter" from Forest Hills appeared shaken up. Plus, of course, traffic came to a halt.