The USS Constitution will commemorate 9/11 in a ceremony that starts at 8:15 a.m. and which will include several one-gun salutes and the playing of taps between 8:46 and 10:28 a.m. to commemorate incidents from the first plane hitting the south tower of the World Trade Center to the collapse of the north tower.

Members of the public are invited; people over 18 will need a valid ID. 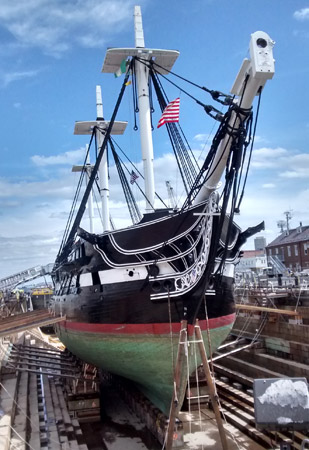 Our own SwirlyGrrl captured Old Ironsides in its new home for the next couple of years: Drydock for some restoration work.

Another voyage before she goes into drydock

Jan looked out her office window this morning to see Old Ironsides returning from Castle Island after a salute of volleys.

The nation's oldest commissioned warship goes into drydock for two years of repairs in March.

Jocelyn photographed the Constitution from East Boston, on her way out to Castle Island.

Twice the history in the Charlestown Navy Yard

Brian MacLean photographed the USS Constitution and the Charles W. Morgan, the last wooden whaling ship in the world, currently here on a port call during its 38th voyage (more photos).

Her last turnaround for awhile

Old Ironsides goes out for a commemoration

Dan Senty watched the USS Constitution as it was guided out into the harbor to fire cannons off Castle Island to commemorate D-Day.

Kristie Helms headed over to Castle Island, where she also watched Old Ironsides and took in the display by some Minutemen:

If you're near the harbor and hear booms today, no need to freak out, probably

Jocelyn alerts us that the USS Constitution will be taken out into the harbor today and will fire cannons off Castle Island in honor of D-Day and the Battle of Midway. The fort will then fire back. Starts around 11 a.m.

Old Ironsides in a salute off Castle Island

The Constitution went out into the Outer Harbor today and briefly sailed under its own power in honor of the 200th anniversary of its victory over HMS Guerriere. On its return trip to the Charlestown Navy Yard, it paused off Castle Island to shoot its cannons.

Some photos from people about town today:

When the Constitution had no masts

Why, yes, that is the USS Constitution on a little harbor cruise today

They're doing a little cruise to promote some petty officers to chief.

BostonMaggie catches Santa saluting the commander of the USS Constitution during a tree lighting at Old Ironsides.

The Boston City Council voted unanimously today to support the tradition of twice-daily cannon shots at the USS Constitution in Charlestown.

Beyond supporting a custom that dates to 1798, some city councilors told Charletown newcomers complaining about the cannon fire to read up on local history.

"When someone moves into the city of Boston, they need to understand the traditions we have, the history," Councilor Sal LaMattina, who represents Charlestown, said.

Councilor Maureen Feeney, who reprsents Dorchester, went even further, saying she found it "almost offensive" that anybody would object to the sound of cannons. "It's so disprespectful for us to turn our back on the sacrifices that were made. ... I'm sorry, it's sad that we even have to have this discussion."

The Herald reports. Hmm, maybe they moved to Charlestown to get away from the noise at the South Street Diner.

If you hear loud booms from Boston Harbor, it's a cannon salute for the USS Constitution, Boston Police reassure.

The T reports the turnaround of Old Ironsides is causing 30-minute delays on the Charlestown ferry.

The Blue Angels are OK'd for a Wednesday 1:15pm flyover of the USS Constitution, the AP via Herald reports.

BostonMaggie blogs that the U.S.S. Constitution is now on Twitter.