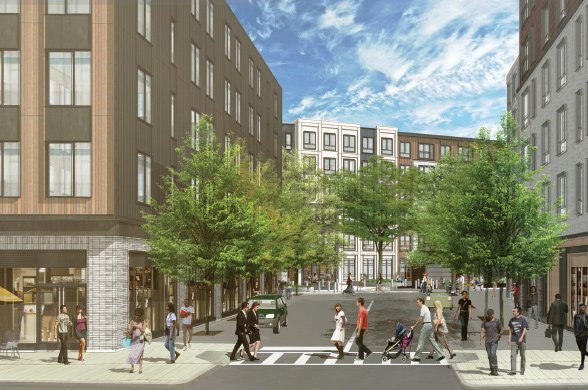 Architect's rendering of the view into the project from Hancock Street.

The Zoning Board of Appeal today approved a new plan for a $200-million, four-building apartment complex off Dorchester Avenue and Hancock and Pleasant streets.

Samuels and Associates, says it hopes to begin two years of construction on the 488-apartment complex in the first three months of 2020 on what is now four acres of former industrial land.

Although both the board and the BPDA approved the Dot Block project in 2016, that was under a previous owner and with an above-ground garage and fewer apartments

Abe Menzin, a senior vice president of development with Samuels, told the board that by putting 345 parking underground, the company was able to add both additional units and more green space along new roadways to better connect the existing neighborhoods that surround the site.

The buildings will rise between four and six stories.

One of the buildings, on Hancock Street, will have roughly 100 "compact" units that are smaller than normally allowed, under a city program aimed reducing housing costs somewhat by allowing smaller units, Menzin said.

He told the board that seven ground-floor units off Dorchester Avenue would be built as work/live units for artists, with living space in the rear and studio space in the front, where strollers could gaze in. They in turn would be part of a "civic space" that would also include new ground-floor retail space.

Some 66 of the apartments will be rented as affordable, with 25 set aside for people making 50% or less of the Boston area median income. Nearby Dorchester residents will get priority for half of the 66 affordable units.

Menzin said the company is also designing smaller commercial spaces along Hancock Street aimed at neighborhood entrepreneurs who want to try out new retail concepts with pop-ups and other short-term offerings.

Samuels will pay to have the intersection of Pleasant and Hancock streets rebuilt and have signals added to it.

Enough -- Just build it! Anything is better than the current strip of blight, prostitution and drug dealing

I'll believe it when I see it. There's been plans and more plans, investments, and more investments. The only progress made has been demolition.
I am pleased to see they eliminated the idea of keeping the rotary at Pleasant and Hancock. The new intersection looks safer.

Is there a sudden surge of artists? It seems like every other new project has space set aside for artists.

It's a silly attempt by the city

to keep it 'hip' and 'cutting edge'. And also to have somethings to point to when accused of not doing enough regarding our cheap subsidized houding fot artists. Definition of artist varied wildly.

Not really, but there is a

Not really, but there is a surge of former artist spaces being turned into condos and artists being evicted from the spaces they've worked for years (and the neighborhoods that they helped make profitable). See the Piano Craft Guild, Rugg Road, EMF in Cambridge, and others.

Considering this and everything the cultural community brings to Boston economically, seven out of 488 spaces being set aside for certified artists is a great investment.

Yes and no, large numbers of

Yes and no, large numbers of artists have been displaced from Fort Point and the South End for several years now. And given our population explosion, the numbers of everything is surging. People keep having babies at higher than population replacement rates and this is what happens.

The Mayors office of arts and

The Mayors office of arts and culture offers affordable live work spaces for “certified artists”. The city lacks these types of spaces. There used to be more but they have been deemed unsafe/unkept. A lot of artist types have moved to places like providence and philly to more affordable live work
Spaces.
https://www.boston.gov/departments/arts-and-culture

Some of the BS artists around here

Because all the old artist spots are being sold off

Several old artist and musician facilities have been closed (read: turned into condos) in the last couple of years. Making new affordable spaces for artists is a good thing.

Sweet Corn, the car wash can

Man who was found next to crashed SUV in Dorchester, several blocks from where he was shot in the head, has died, police say
Man shot, car crashed on Kingsdale Street in Dorchester
Dorchester woman settles doubts whether you can get a Corolla up to 100 m.p.h., State Police say
Developer proposes 15 condos on Hancock Street in Dorchester
BC High moves to online classes after fifth student tests positive for Covid-19; principal warns parents of student contact with outsiders after school
Morrissey Boulevard drivers advised to pack hip waders for the next week