Soldiers Field Road landmark signs off for the last time 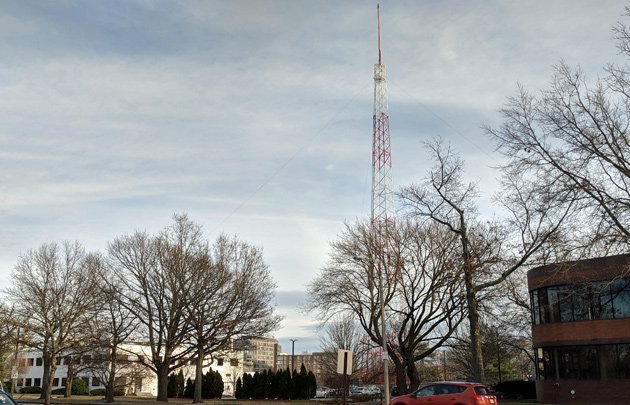 Earlier this month, WBZ tore down the antenna that had towered over Soldiers Field Road in Allston since its construction in 1950.

The move comes as a developer, National Development, goes through the approval process to build a new studio complex for what is now just WBZ-TV next door, after tearing down the small office building that now sits there.

WBZ-AM decamped for Medford in 2018, after CBS sold it to Iheartmedia as part of a deal to win federal approval of its merger into Entercom.

The 216-foot-tall antenna originally went up in 1950 as a backup for much taller antenna - 659 feet - built for the then newfangled WBZ-TV as part of WBZ's two-year-old studio complex on Soldiers Field Road.

The main antenna didn't last long - Hurricane Carol blew it down at 12:13 p.m. on Aug. 31, 1954, and it fell, much of it on the studio building. It took engineers and 100 construction workers with bolt cutters and three cranes nine hours to remove the debris, restart the TV station's emergency generator and then connect the transmitter to the backup tower to get it back on the air.

William Bazzy, an engineer who was working at WBZ at the time, remembers the hurricane slamming the station:

We had to evacuate the building and one woman got trapped on the second floor. We could hear her screaming, so me and some other fellows went back in and climbed up to her and got her down as the rain was coming in on us from the hole torn into the roof. She was as wet as could be and everyone had left. She was very glad when we helped her out.

The radio station was back on the air in just 12 minutes because then, as now, its main transmitter and antennas were located in Hulland engineers were able to quickly reconnect the studios with that facility.

The TV transmitter was eventually moved to its current location in Needham. The once again backup antenna was converted into a backup for WBZ-AM - which would use it when the Hull transmitter or antenna needed work, for example, in 2003, when the two Hull antennas were repainted.

WBZ AM is a "clear channel" station. After sundown other AM stations on or near that frequency had to sign off and stop transmitting. Because of the ionosphere bouncing the signal you could hear them way across the country when the conditions were right. Used to be a thing to scan the dial trying to pick up stations from far away. It was kind of like the Internet before comments were invented.

That's part of it

The other part is that WBZ's antennas are turned to pump more of their waves towards the west, which really helps the station propagate well inland (and their location on the water helps ensure it has a good signal along the water well up into Maine).

But not so great on the Cape

Even though the path from Hull to the Cape is over nice conductive salt water, reception on the Cape at night is marginal. 1010 WINS in NYC has always come in better. Is it because of the way BZ's ground plane is set up?

Ever since I moved back to the Lower Cape, I’ve gotten used to trading 22 minutes for the world ;)

It was a great game for rural kids

I remember my brother waking me in the middle of the night, very excited that he "got one from Boston". We lived in Eastern Oregon in a town with a single low watt AM radio station that signed off between 9pm and 6am (no interference) and he would scan the dial for whatever he could receive. He had a map on his wall for stations that he "got". There were times when we would be driving through the middle of nowhere at night and pick up WGN out of Chicago like it was local, but catching an east coast broadcast was far more rare.

Yep I did that too

I remember a day where it seemed the dial was just FULL of stations. Something in the air that day....I got an FM station from Homestead Florida in Upstate NY. So weird.

But today, you can just say, "Alexa play [insert basically any station in the US]" and voila, you are listening to a clear signal from thousands of miles away.

We city kids used to do that,

We city kids used to do that, too. Cloudy nights were the best to hear stations far away - we used to hear CKLM in Montreal, WABC in NYC. My dad used to get Reverend Al from California some nights.

It was a lot of fun.

I remember doing the same thing, always hunting for a French language station because that seemed so cool at the time. Understood very little, given I was studying "la belle langue" at high school level, but did like the music.

Alexa made it boring.

Part of the fun was seeing what random station you would get, and making all sorts of antennas to see if it would come in better.

I had 2 bare copper wires strung up to my ceiling (over 7ft in either direction) I used as antenna.. (it was the only way I could get Fox25 in Northern NH).

But it was my GE alarm clock from 1984 that always got the best radio stations. I used to listen to WTIC in CT all the time in the evening.

I can beat that

I had a cheap AM tube radio as a kid. I also had a metal lamp by my bedside. When radio was next to lamp, at night I got a clear harmonic of Radio Moscow's English shortwave broadcast. It helped me learn to recognize propaganda.

Is that all you learned? Why

Is that all you learned? Why don't you pass the time by playing a little solitaire?

You haven't earned more than that.

That's why she's top three, y'all.

that we won't be able to hear WBZ at late night/early morning on the NJ Turnpike anymore? Used to be a thing that, when going down to Virginia to see my late Grama and Grandpa, Dad turned on Steve Levelle and he kept us entertained until Baltimore.

This is the backup tower.

This is the backup tower. The tower itself is in Hull.

And you can still get WBZ across the country and internationally over the air. We just got a note from someone in Japan.

If you've been able to hear

If you've been able to hear them since 1940, when Hull became the main transmitter site for AM 1030, I'd imagine you will still be fine.

WBZ-AM is directional by choice

When WBZ-AM moved to Hull in 1940 they elected to become directional by choice and this allowed the station a much stronger signal to the north, south and west. This hampered the signal on Cape Cod. However even today WBZ can be heard an hour before sundown in Chicago as clearly as any local station.

The only other clear channel that went directional by choice is WWL in New Orleans who saw no reason to beam 50,000 watts into the Gulf of Mexico.

The clear channel stations in New York could not do this because of Long Island.

Scott Fybush explains the WBZ signal better than I could

By moving to Hull, with substantially its entire listening audience to the west, WBZ was also able to take advantage of the new science of directional AM antennas. While the station enjoyed the best possible allocations classification (what would soon be known as a "I-A clear channel), allowing it to run 50,000 watts day and night without directionalizing its signal, its engineers realized that a simple cardoid pattern at Hull would reduce the amount of signal wasted over the Atlantic Ocean while increasing its field strength in densely-populated metro Boston. Only a handful of other "optional" directional arrays were ever built: WTAM in Cleveland and KNX in Los Angeles eventually returned to non-directional operation, and today only WWL in New Orleans and WBZ in Boston are directional I-A clears.

(An amusing digression: many decades later, an FCC inspector visited WBZ for a routine inspection. As he would do at any directional AM, the inspector asked to see the list of monitoring points the station used to ensure its array was in compliance. It took some explaining, a WBZ engineer would recount later on, to persuade the inspector that WBZ had no monitoring points, as it had no obligation to protect any station in its nulls and, indeed, no obligation to operate with a DA at all.)

Is Dave Letterman out of retirement and working for a company that owns a billboard in Allston?
Throwing down, Allston style
When the walls come tumblin' tumblin' down
Great Scott won't be moving into old Allston train station, but American restaurant likely will
Glory be: Boston finally getting the 'spasm of design expression' its skyline deserves, architects exult
Almost only counts in horseshoes