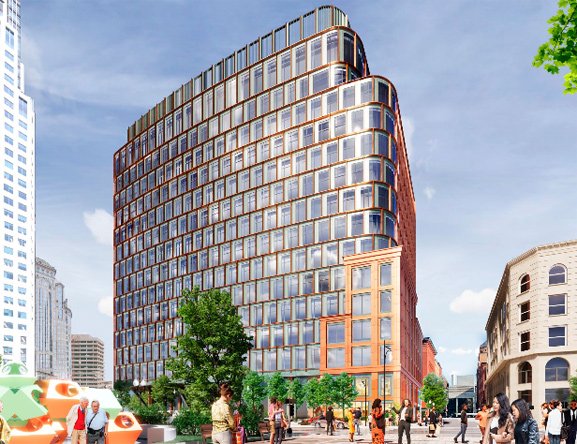 A Toronto developer has swapped out its plans for a 24-story office building at 125 Lincoln St. - now home to a parking garage and the Hei La Moon restaurant - with new plans for a 14-story building made up mainly of research and development space.

In a filing this week with the BPDA, Oxford Properties Group said it is committed to bringing Hei La Moon back to the new building - or if that can't be arranged, to find a similar style restaurant for some of the ground-floor retail space. The company said it talked to C-Mart about returning to the site, but said the market closed this spring due to Covid-19 issues and that its owners have no interest in re-opening there. Instead, Oxford says its hired Graffito SP, based in the Leather District, to fill ground-floor retail space with local merchants.

Importantly, as with other properties in Oxford’s Boston portfolio (e.g., 125 Summer Street, 225 Franklin Street), a traditional ground floor lobby will be eschewed in favor of a space that blends commercial, retail and public uses in a way that more thoughtfully reflects the live-work character of vibrant neighborhoods.

Oxford told the BPDA it can make money with a shorter building by making floors larger, through an overhang over MassDOT land along the neighboring I-93 onramp. The company said it looked at requests from Chinatown and Leather District residents to add housing to the building, but said that would only be economically viable with an even bigger building, because more office space would be needed to subsidize the residential units.

The new plans call for a 150-space underground garage, down from the 275-space garage the company originally proposed. But the company has increased the amount of ground-floor space devoted to retail from 4,100 to 8,500 square feet.

Oxford said the newer, shorter design will reduce the building's visual impact on the surrounding area and reduce the odds the building will generate enough wind velocity to knock people's hats off, the company says.

The company said it is currently talking to MassDOT about purchasing the air rights above its I-93 land. It cautions, however:

While this approach would help creatively respond to community and stakeholder feedback, it does bring additional risk, increased costs and additional regulatory review to the Project.

The company continued that the plans still call for creation of a new plaza and other improvements for pedestrians, including wider sidewalks and new plantings and lighting to create a nicer pathway between Chinatown and the Leather District. Now it's only a little bit

Now it's only a little bit ugly.

question for you anon

What building of this size do you not consider to be "ugly"? Link some pics.

..but I will forever mourn the loss of the dim sum.

A Toronto developer. This is

A Toronto developer. This is supposed to be good for Boston?

Yes, outside investment is good for Boston

Will create much needed jobs and tax revenue at a time when some are predicting the decline of cities.

The decline of cities are directly tied to the pandemic.

I find nothing funnier than this descriptor of cities declining. There is effectively a recess of their ease of access/convenience until we are past the limitations imposed by the pandemic.

In three years the CT recent grad is going to be asking which SOMA flat has the most ammenities.

If cities bounced back from redlining and suburban subsidy

... they will easily bounce back from this.

Particularly when cities are vastly more energy and resource efficient and we are living in a time where that is absolutely necessary.

Would the building actually

Would the building actually be above the ramp? The plan shows just a plaza there.

Not over the ramp, no

Sorry if I was unclear. MassDOT owns some land along the ramp, and if you look at the developer's plans, it shows the first few floors within their property lines and then after that, the floors extend outward over the property line - sort of like the pregnant bank building downtown, just not as dramatically. But, no, they're not building a platform or podium or whatever they call it right over the ramp.

Rockland Trust to shut 16 current East Boston Savings Bank branches
Law student who doesn't want to get a Covid-19 shot sues his school, which says he has to
The early history of Chinese laundries in Boston
BPDA agrees to let developers ditch Chinatown BPL branch in proposed Tremont Street building, but says don't worry, it has an even better site in mind
Teens, police hand out personal alarms to Chinatown elders
BTD worker injured in early morning carjacking