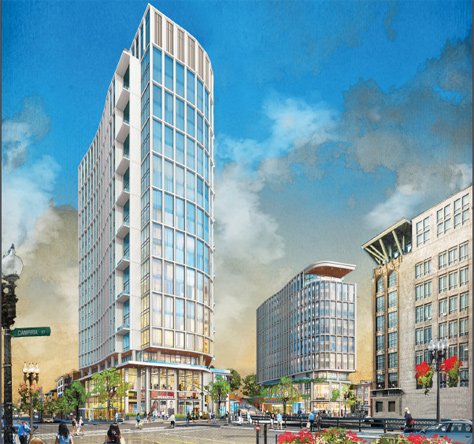 The developer constructing a two-building complex along and atop the turnpike at Mass. Ave. says it wants to outfit roughly 118,000 square feet of space as life-sciences labs and offices - about a quarter of the office space originally planned for the project.

In a filing with the BPDA yesterday, Samuels & Associates says the proposal will mean no significant changes in the overall project's impact, and is asking the agency to allow the proposal without requiring any additional hearings. The company notes that life sciences was included in its "planned development area" agreement with the BPDA as a potential use of some of the space.

Because most of the commercial space in the complex would remain traditional offices, the new lab space won't even require the sort of expanded rooftop HVAC work that has become an issue with other life-sciences proposals in or near residential areas, Samuels says. Instead, the developer says it will be able to incorporate the extra ventilation needed for the labs in internal mechanical space already set aside for HVAC.

The change will mean a reduction in the amount of retail space on the first and second floors, from 55,000 to 43,000 square feet, Samuels says.

The company says about half the office space in the new development has already been leased to "a major publicly traded technology tenant" for use as its headquarters - CarGurus, an online car marketplace.

In additional to office and lab space, the project also includes a hotel, retail space on the first and second floors and a publicly accessible park and seating area overhanging and overlooking the turnpike.

All these labs will be converted to FroYo stores. Or maybe record shops.

I believe this is CarGurus?

Shame about the loss of what was going to be a great amount of activated retail on that stretch of Mass Ave... hard to turn down those life sciences $$$$, though, I guess...

I've updated the story with the CarGurus info.

If you look in the documents on the BPDA's website (the presentation is a good one), you'll see its 2 floor retail because it has a park plaza of sorts between those two buildings that goes up to a lookout park over the pike (its kinda cool in the renderings). I think the retail is those two levels, so not TOO much lost, esp if its along the backside. So the street level (mostly the corners of Newbury @ mass and Boylston @ mass) would be kept.

Best of all, this has little parking (mostly what's available in the loading dock area)

they also have a website for this project with construction updates: www.buildp12.com

"Samuels & Associates says the proposal will mean no significant changes in the overall project's impact, and is asking the agency to allow the proposal without requiring any additional hearings."

That's rich. The building was approved because it was retail & office space and now, because labs are white-hot, they want to change it mid-construction. And without additional hearings, yet the building is located next to the residential part of Back Bay/Fenway. I hope BPDA tells them to take a hike.

Who said anything about the retail going away. Maybe I missed this, but isn't it just swap of office space to lab space (and eventually to froyo...lololol)..

The company notes that life

The company notes that life sciences was included in its "planned development area" agreement with the BPDA as a potential use of some of the space.

Hockey at the Garden
Plans to re-open the Pour House fall through
Not a good way to start the day: Orange Line is dead Jackson to Back Bay
Cops hunt Green Line upskirter
Back Bay to get first of Chicago-based convenience stores with takeout food a step up from that one hot dog endlessly turning on those metal rods
Fabled Boston bike-lane clearers really exist