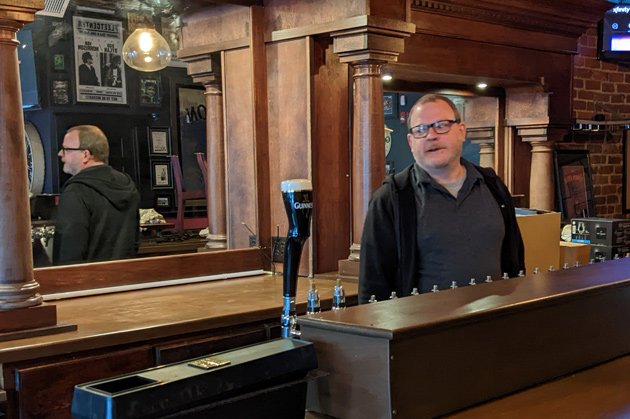 Smith behind the bar with the one installed tap - for Guinness; says more will be online by next week.

Eugene O'Neill's, across from the Forest Hills T stop, plans to throw open its door on May 12, some 4 1/2 years after it closed during the morass caused by the demolition of the old Casey Overpass and construction of the new Arborway.

New manager Carl Smith didn't have to move far - he was a longtime bartender at Foley's Fireside Tavern just down the street, which the Foley family shut on March 20 - the latest in a string of bar closings along Washington Street and Hyde Park Avenue from Forest Hills to Readville in recent years that had included Tonic next door to O'Neill's, Doyle's, the Drinking Fountain, the Cottage Cafe, the Hyde Park Pub and Cappy's.

Smith said owner John Jacob, who owns several bars in the area, including Napper Tandy's in Roslindale Square, never gave up the liquor license for the shuttered O'Neill's - named for the playwright buried in Forest Hills Cemetery, just a short walk from the bar - and figured now would be a good time to re-open a neighborhood watering hole in Forest Hills. Not only have people have been returning to public spaces after the pandemic but Forest Hills has seen - and is continuing to see - construction of hundreds of new apartments and condos, on either side of the Arborway, most recently in a new complex right next to O'Neill's block, where a parking lot used to be.

Smith said he's trying to create something Forest Hills doesn't really have now - a sort of hang-out bar where people can get something to eat and drink and then stick around to take in the Sox game. He added he hopes to welcome not just the neighborhood's new residents but the old-timers who used to make the Fireside Tavern their home away from home.

Smith said the revamped O'Neill's will start out with about 10 beers on tap - including Guinness, of course - and a relatively small menu of basic bar grub and cocktails. But that's more to give the staff time to ramp up and to see what sorts of beer people want, he said - over time, the bar will expand its tap offerings and the chef has permission to add to the menu.

He said he doesn't see O'Neill's as competition for the nearby Brassica and Dogwood Cafe - both places he would sometimes go to during his Fireside Tavern days and both places about which he only had good things to say. Brassica is a full-service sit-down restaurant, and while the Dogwood has a bar, it's only open until 9. O'Neill's, he said, would be open until 1 a.m. and plans to serve food until at least 10.

I loved that place. Can't wait for this.

I'd love to see the Fireside turned into a small venue a la The Midway. However, would the residents of the area allow that to happen if it could?

a 12 minute walk away from the midway no?

There is quite a bit of new housing in that area already, there is even a bar and restaurant for lease just one block away with the same amenities you are seeking...

apparently their building got bought out. Despite, the “quite a bit of new housing” the region still does not have enough housing, and directly across the street from a transit hub is a perfect spot to build a bunch of units with no parking with ground-level commercial. I’m not particularly tied to what would go in the ground floor, but I am always happy to see more food and drink options around.

Then Make It Different Than The Midway

Really? Make it more upscale with better live music, a nice beer selection, and a self-selecting crowd less hairy and self-righteous than at the Midway. It would therefore be a completely different option, not taking away patrons from the Midway.

While it wasn't a place I went often, I'm surprised JJ Brannelly's is still closed, three years in. Are the owners just waiting for the best offer to sell their license?

But I used to stop in there on Saturday afternoons after work on the ride home every once in a while and catch the end of a game. Great dive bar. But what surprised me is that I stopped in randomly one Saturday night and the place was hopping. They also had some decent pub food (unlike Fireside) if I remember correctly.

I guess my point is that there was a decent crowed there at night so I'm not sure customers were the issue?

That's what I thought maybe it was a liquor license cash-out thing since the business seemed pretty viable.

The bridge did not cause that

The bridge did not cause that place to close. I watched the entire demolition from them at bars window, and they were open a few years after it was down.

Tonic next door on the other hand was hot garbage from day 1.