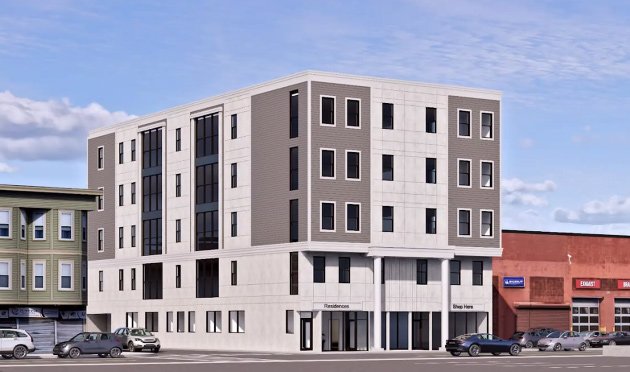 The Zoning Board of Appeal today approved plans to create a five-story, 20-unit condo building at Dorchester Avenue and Bay Street in Glovers Corner by expanding an existing three-story building on the site.

Owner Karen Diep's plans call for no parking in the newly expanded building, which is roughly three blocks from the Savin Hill Red Line stop and near bus lines.

The building will have 4 one-bedroom units, 13 two-bedroom units and 3 with three bedrooms. Three of the units will be sold as affordable. The proposal also includes space for two ground-floor offices or retail outlets.

The Columbia Point-Savin Hill Civic Association opposed the proposal because of its height, density on the site and "lack of a cohesive design" and urged a smaller building. City Councilor Frank Baker, however, supported the proposal as is.

Also not a fan of the design, although a vote for the project, was board member Mark Erlich.

"It seems kind of boxy and uninteresting looking," he said, asking BPDA planner Jeff Hampton if the BPDA was really in favor of something like that. The board approved the project on the condition that BPDA planners work with Diep and her architects - 686 Architects, which is housed in the current building and plans to stay there - to improve the design.

686 is owned by former ISD Commissioner William "Buddy" Christopher, who appeared at the meeting with his son James and Diep's attorney, John Barry: The building it is replacing. Except with maybe a bit more architectural detail.

But there is ZERO "cohesive design" on this stretch of Dot Ave. unless you call single story strip shopping centers "cohesive design." If anything it fits in with the giant box of the Boys & Girls Club a block down the street.

It's a five-minute walk to Savin Hill T and the bus runs right along Dot Ave. This is the kind of place where we do need to start building taller if we want to keep housing costs down and reduce the use of cars to get around.

There is available land there with older uses in need of replacement.

Make offer on site, get BRA approvals, get a loan, get Union, because you have to build Union or make a PLA deal, and get going.

Have fun building tall on a filled swamp. Everything east of Dot Ave between Bay and Freeport is former tidal land.

Go on - Get going. Build your tall building. It will be fun watching the cost overruns you trying to cope with your foundation issues and still deliver a project people can afford.

Also, if you don't like how Dot Ave looks, why do so many UHubbers keep moving there and forcing the working class out to the burbs?

How many u-hubbers live there who haven't all along?

Being opposed to more housing

While complaining about the blue collar being pushed out to the burbs is peak OFD.

But at least in the burbs you won’t likely be forced to take a bus to the grocery store, rubbing shoulders with non-OFD.

How on earth they ever figured out how to build tall in the Back Bay and South End. Both are filled swamps/bays/coves (except for right along Washington St.)

My point is that government shouldn't stand in the way of projects like this one given that more housing within a reasonable distance of transit is desperately needed in Boston -- particularly in light of the challenges you brought up in building ANYTHING in Boston. Most of the excuses given by opponents are frankly ridiculous.

It's fairly obvious that you don't know how real estate works or what construction costs are.

Also, if you don't like how Dot Ave looks, why do so many UHubbers keep moving there and forcing the working class out to the burbs?

The answer is that there's no one in Southie or the South End left to force out and northern Dot was the next place to buy cheap property and replace everyone.

Requires steel and concrete throughout, and $1500+/sqft sale price just to break even. I highly doubt anyone would be willing to pay $1,500/sqft on that stretch of Dot Ave.

It's a one-minute walk to a

It's a one-minute walk to a red line stop and there's condos (and I'm talking like a single floor in a triple-decker/multi-floor house) within 1/4 mile selling for over $1M. It sucks but someone will pay.

Not much of a bus

The 18 does not run very frequently, sometimes just once an hour and not at all on Sundays.

Gonna get even worse with the

Gonna get even worse with the new schedule proposal, too.

Knock down the no longer

Knock down the no longer active car repair shop and make it bigger.

Nothing looks the same in Boston, especially outside of downtown Boston where it's all triple deckers and new construction sprinkled in.

It's those columns out front that make it look so bad. Get rid of them, or even just square them off, and it just looks like a building - nothing special. The columns give it that extra oomph into something hideous.

They're helping reduce the size of the structure for the cantilever above. But you're right, they could tuck them into some street level fins of some sort - giving more interest. And a better way for management to deal with snow removal rather than around columns.

Further, you don't necessarily need steel throughout. Done properly, you can do steel for the first 1 (maybe 2?) floors and the rest can go wood structure above. However, you will need at least 1 elevator and those are not cheap.

reaffirms that he is a solid member of the Savin Hill Mutual Admiration Society.

Fire erupts in three decker on Wales Street in Dorchester, spreads to neighboring house
Gun-toting teen from Brockton and three other Brockton pals were joyriding through Dorchester on scooters, until they ran a stop sign, police say
Taking flight in Dorchester
Another set of stairs at JFK/UMass shut as unsafe
Teen points loaded gun at cops and curses them out, runs away, found hiding under a car, police say
Covid screamer with a bullhorn arrested at mayoral coffee hour in Dorchester