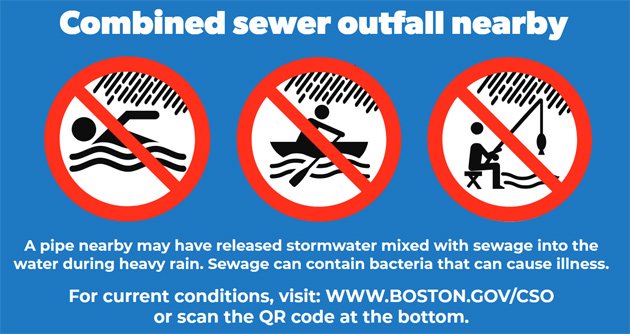 The Boston Public Health Commission reports all the rain has overloaded local sewer mains, to the point that one MWRA Outflow pipe, upstream of the North Washington Street Bridge, started pouring sewage-laden water into the inner harbor at 1:01 a.m, "creating a potential public health risk."

The sewage flow from MWRA Outflow MWR203 stopped at 3:02 a.m., but the commission reports that in the unlikely event you feel like jumping into the inner harbor for a bracing swim for the next couple of days: Don't. Also, pull up those fishing lines and consider not trying to row from one side of the harbor to the other.

The public is advised to avoid contact with affected water bodies for at least 48 hours after a sewage discharge or overflow, during rainstorms, and for 48 hours after rainstorms end, due to increased health risks from bacteria or other pollutants associated with urban stormwater runoff and discharges of untreated or partially treated wastewater.

Although the MWRA and the Boston Water and Sewer Commission have spent hundreds of millions of dollars over the past few decades reducing the amount of rainwater that gets into local sewers, overloading them and leading to raw-sewage discharges into the harbor and the rivers that feed it, intense bursts of rain can still lead to issues, whether through cracked pipes, gutter downspouts that still connect to sewers or illegal industrial connections. When this happens, sewage flows into "combined sewer overflow" pipes that pour into local waterways - designed to relieve pressure on the sewers and protect homes and businesses from sewage backups in such instances.

A combined sewer overflow occurs when a large storm overwhelms the combined sewerage system causing rainwater to mix with wastewater and discharge to a nearby water body. This prevents sewage backups into homes and businesses.

Most of the active CSOs in MWRA's service area receive treatment such as screening, disinfection and dechlorination.

Just this morning, I got email from PaddleBoston saying that they will stay open for kayak rental in Cambridge (and Auburndale) this weekend.

Are they on the Charles?

The dam should protect them from the effects of this.

That said, I'd be leery of contact with water in the below Mass Ave, to say the least.

They're on Broad Canal in Kendall Square

which is just off the Charles River. Some folks may choose to paddle through the dam locks.
Map

Then the rental place should

Then the rental place should tell them to stay upstream of the locks.

On the plus side

This warning means the area is getting a desperately needed douse of rain.

It is way past the time that

It is way past the time that this should still be happening. The various organizations/ communities that own these need to stop waiting for grants and fix this now. It is unacceptable in such a wealthy state, where tax income was high enough that the state is giving billions back to high earners instead of fixing this and closing the funding gap for the mbta. Stop dithering Baker and fix this.

Pay attention to your government

This is getting fixed. The MWRA has been doing tremendous amounts of work for at least a decade, separating sanitary and storm sewers. The number of CSOs per year has fallen dramatically, even as the number of intense rain events per year has risen.

The sewer systems are large, complex, and spread over a massive area. It takes a long time to fix.

This causes Magoo to ‘member when Magoo used to go swimming off “How’s Your Neck” in Q-Town and Magoo would see turds floating by. Magoo.

Lets stock up on Schlitz and head for the bridge at Malibu, for a retro beach day. It'll be cleaner than a wading pool anyway. Great weather this weekend.

Good luck with that. Schlitz is really hard to find in this area. If you know where to buy any, please let us know.

"intense bursts of rain can

"intense bursts of rain can still lead to issues, whether through cracked pipes, gutter downspouts that still connect to sewers or illegal industrial connections."

What about the remaining combined sewers, which are fed by street drains? I thought they're not 100% removed yet. Also some areas have separate storm drains which have a limited capacity, and dump into a combined sewer in overflow conditions.

There still are some old-fashioned combined sewers out there.

Serious question: How does

Serious question: How does sewage overflow affect boating? I can kind of see why you might not want to paddleboard but if your in a rowboat or sailboat what's the issue?

Boston music crisis: Another large rehearsal space set to close, this time in Charlestown, councilor says
More loud banging reported, but probably not F15s this time
Man arrested for taking a snooze in his car on an I-93 onramp in Sullivan Square - and for being drunk and having a loaded gun - DA says
For first time in centuries, native Americans use traditional fire technique to create canoe along the harbor, then paddle it into the water
Repair work on unfinished North Washington Street Bridge has started; state hopes to open span to vehicles in December, 2023
Meetings next week suggest the North Washington Street Bridge project could be about to start up again