Wu: One of top priorities is hiring a Mass-and-Cass chief 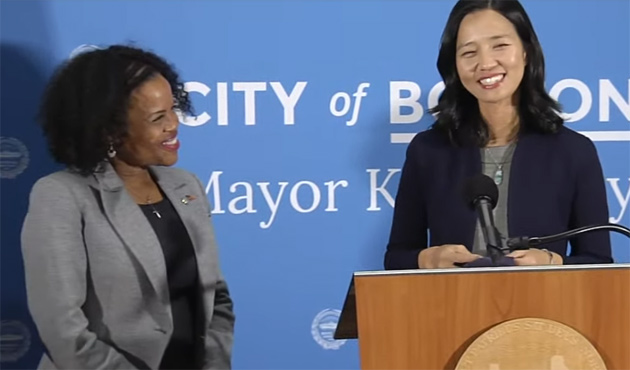 Janey and Wu share a moment at press conference.

At a joint press conference with acting Mayor Kim Janey, Mayor Elect Michelle Wu said hiring a Cabinet-level person to deal with the ongoing crisis at Mass and Cass will be one of her top priorities even before her administration starts on Nov. 16. Read more.

Michelle Wu's other first: First mayor to live in Roslindale

In the political scheme of things, Roslindale doesn't get much respect - whenever legislators have to stitch together district lines, Roslindale's where they do it: The neighborhood is represented by three different city councilors, two state senators, two members of Congress and, gosh, who can keep count, but like five or six different state representatives.

But starting Nov. 16, Roslindale will be able to claim a mayor of its own, and for the first time ever in Boston history, at least dating back to the 1895 election of Hugh O'Brien - a mayor who had some firsts of his own to claim (the first Boston mayor born outside the US and the first Irish-Catholic mayor).

Wu wins, becomes first woman of color to get elected mayor of Boston

City Councilor Michelle Wu today won even West Roxbury in a successful race for mayor and will be inaugurated as mayor on Nov. 16. Read more.

If you haven't already voted, here's a look at the three questions.

Michelle Wu can spend tomorrow in Boston; judge agrees she doesn't have to spend time in Salem answering questions about the city council's tastes in religious leaders

A federal judge on Friday ruled Michelle Wu does not have to show up in Salem tomorrow to answer questions about how the City Council picks religious leaders to start Wednesday council meetings with an invocation. Read more.

Postal Service says no ballots were tossed in South Boston

The USPS tries to stamp out allegations by City Councilors Michael Flaherty and Ed Flynn.

On the night of the preliminary, Boston election nerds grew increasingly fidgety and the hours wore on and we knew who was winning the California recall vote even as Boston was still showing no results. Matt McCloskey reports he and other results crunchers have organized to collect info from all of Boston's 255 precincts and to post them as soon as they're posted on a wall at each location.

Satanists acknowledge that, yeah, they wanted to mess with Michelle Wu

A lawyer for the Satanic Temple in Salem today filed an explanation of why his group wants to make Michelle Wu spend several hours in Salem on Election Day to answer questions about how the City Council invites clergy to open its meetings with an invocation: To make her think about what she's done. Read more.

The Satanic Temple of Salem, whose legal team now includes a hardball lawyer with a penchant for representing right-wing provocateurs, is demanding that Michelle Wu spend a good part of Election Day in Salem, answering questions about how the City Council chooses clergy members to lead the council in invocations at its regular Wednesday meetings. Read more.

Michael Flaherty Has Always Been a Leader

No need anymore for Flaherty to remind voters what he uses to mix things. Read more.

Election roundup: Bostonians getting creepy postcards from out of state; candidates debate again 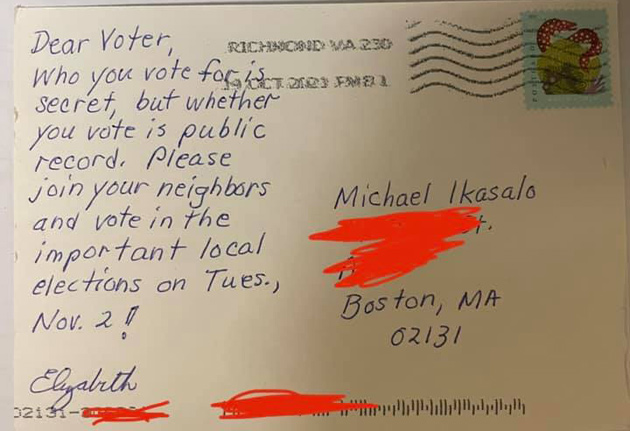 People in Roslindale and Jamaica Plain report getting post cards from out-of-staters letting them know that whether or not they vote is a matter of public record and, of course, implying that somebody is keeping track. Nothing creepy at all about that, even if it is true one's record of going to the polls (or sending in a ballot) is public. Read more.

As the fallout over her most recent flier (scroll down, past the racist Easter-egg item), District 6 council candidate Mary Tamer today apologized - not long before she was scheduled for a meet-and-greet in Jamaica Plain, where the reaction has been, oh, a tad more negative than in West Roxbury. Read more.

For the past couple of weeks, somebody's been going around Roslindale tossing plastic Easter eggs into people's yards that, when opened, have the above piece of paper in them. Calling the candidate a "communist" would be kind of laughable for anybody who actually knows what "communism" means, but aside from that, it's become a code-word for "Asian-American" since the start of the pandemic. Read more.

Or you want to see the half you missed when WBZ decided "Jeopardy" was more important, C-Span has put up a recording of the entire debate.

The two candidates debate at WBZ.

WBZ has the summary of the debate its Jon Keller moderated. More from NBC Boston. Read more. 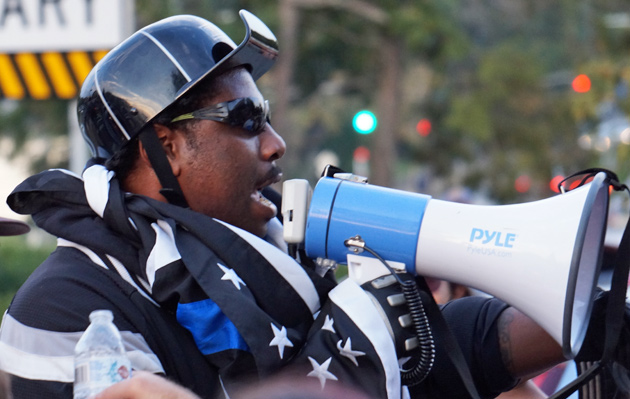 The Dorchester Reporter reports that both the Massachusetts Republican Party and the Boston Police Patrolmen's Association donated money to failed at-large candidate Donnie Palmer before the September preliminary. Read more.

Election roundup: Forums this week; Whatever happened to Kevin the pothead?

The big one is Wednesday, when Annissa Essaibi George and Michelle Wu face off in a debate on WBZ at 7 p.m. Read more.