In a world-class city, you'd expect the sob-story guys to be multilingual

The Huntington News reports a well meaning Northeastern student gave $60 to a guy at Ruggles who said he needed to get back to New Hampshire. Campus police caught up with him and escorted him off campus.

Oh, for simpler days, when sob-story people just asked for money to get to Worcester 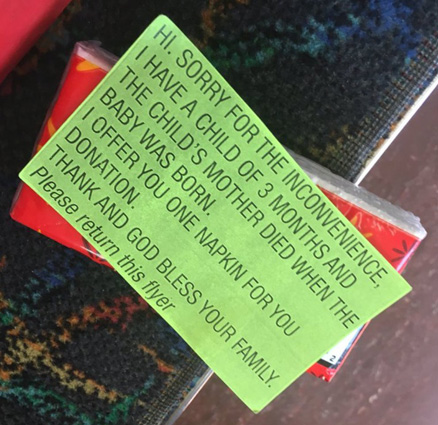 The past few weeks have seen an explosion of the number of Tissue People on the T: People with allegedly horrible lives who seek donations in exchange for a small pack of tissues.

Annie Oakenfold, who has been collecting these notes for more than a month now, reports a woman passed the above note and a pack of tissues on the Orange Line tonight. Read more.

A BU student was likely the victim of a scam yesterday when the student parted with $100 to help the nicely dressed gentleman who needed the money for a cab to get to an important meeting because his car had a flat tire.

Well, what do you know: A man pestering people at South Station for money for an urgent train ride really did have a pressing reason to get back to Framingham. Unfortunately for Jeffrey Bliss, 32, however, that reason was a warrant out of Framingham District Court for shoplifting.

Transit Police report officers watching Bliss figured the elderly couple he'd been trying to wheedle money out of around 4:30 p.m. yesterday by claiming he had to get back to his family had had enough, so they moved in for a little chat of their own.

The chicken and potatoes lady

At least she's not asking for money to see her parole officer in Worcester.

The Sob Story Guy who was telling the truth

One of the constants of Universal Hub Twitter feed is that people regularly send me updates on the whereabouts of Sob Story Guy and Sob Story Girl (actually, should be plural, since there's more than than one of each).

People really, really hate being confined to a metal tube underground (or just sitting in a restaurant or theater) while an angry or seemingly distraught person demands money to see her kid in Portsmouth or his parole officer in Worcester - especially if story tellers are heading the wrong direction from the train station you'd take to get to those places or if they're repeating the same tear-laden spiels veteran Bostonians have heard for years.

But are these story tellers people with mental disabilities who shouldn't be pointed out and mocked in a public medium? Here's an exchange on Twitter yesterday:

Sob Story Guy is spilling his schtick from IN THE MIDDLE OF THE GREEN LINE TRACKS.

Sob Story Guy gets a taste of his own medicine

Cactus on the Stair reports on how one Sob Story Guy's night ended with him on the train harassed by a panhandler.

So how cold is it?

Jackie Bruno at NECN reports it's so cold that

A guy on Boylston St. tried printing his parking meter sticker but it's blank. Ink is frozen.

It's so cold, J. Tammaro reports from Park Street:

Christoper tweets from Boylston this morning that a Sob Story Guy held a trolley door open and refused to let it close until somebody gave him some money.

Ever get the feeling all those sob-story guys and girls get together to make up stories?

How was Sob Story Guy supposed to know people might not take kindly to him sneaking into a movie theater tonight to beg for money? Kyle Kerr was settling in for "To Rome with Love" at the AMC Boston Common when everybody's least favorite panhandler started trying to work the aisles:

Basically a man (40ish, gray hair) and a woman (who looked a little like Julianne Moore) approached me and told me their bag was stolen, they needed money to take a cab home, and they would pay me back for it later. They showed me a fake police report, gave me their cell number (which has a voicemail box that isn't set up), and texted me their address in Marlborough (a house which is up for sale).

I thought to myself, this is a little weird, but hey, maybe these people really DO need help.

Around 8:15 p.m. yesterday, Rachel Zarrell spotted Sob Story Guy getting on the Orange Line at Chinatown:

Needed money to get to Worcester to "treat his staph infection." Was pretty gross.

But by 11, he'd either gotten it looked at or had just become resigned to it. Colin Steele reported from the Red Line near Harvard:

No story this time, just "anybody? Anybody?"

Not the kind of serenading diners wanted

A sob-story guy gets three years in prison, agrees to leave state after his release

A Dorchester man who admitted conning people out of money last fall through a convincing sob story was sentenced to three years in state prison yesterday, the Suffolk County District Attorney's office reports.

As part of a plea agreement in which he was branded "a common and notorious thief" on 25 counts of larceny and "uttering" (writing bogus checks), Williams also agreed to leave Massachusetts within 60 days of his release from prison - and to stay out until at least Dec. 7, 2021 - the District Attorney's office reports, adding Williams already has a 30-page criminal record featuring 35 convictions for larceny-related offenses.

You know, the guy who always claims he needs $7.75 to get to an appointment with his probation officer in Worcester. SelfRighteousCyclist reports:

Sob Story Guy has been called out too many times on the Red Line. Now hustling outside the RMV on Washington

Can you imagine the conversation between him and Spare Change Guy?