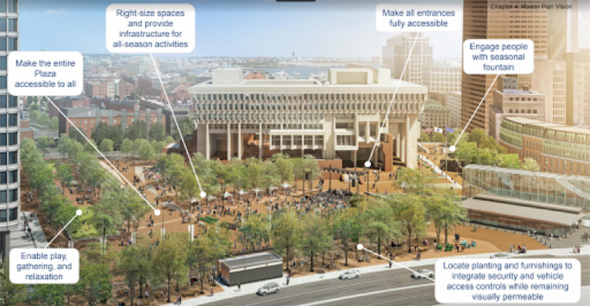 The mayor's office says it finally has a plan to permanently convert the vast field of bricks outside City Hall into a place that can support even more festivals and become a place where people will want to come for more than just special events, but that the work to achieve the seemingly impossible will require it to cancel the annual winter festival that had brought hundreds of thousands of people to the plaza over the past two winters, and don't you dare think the timing might have had to do with increasing friction between the city, the festival's operator and its subcontractors. Read more. 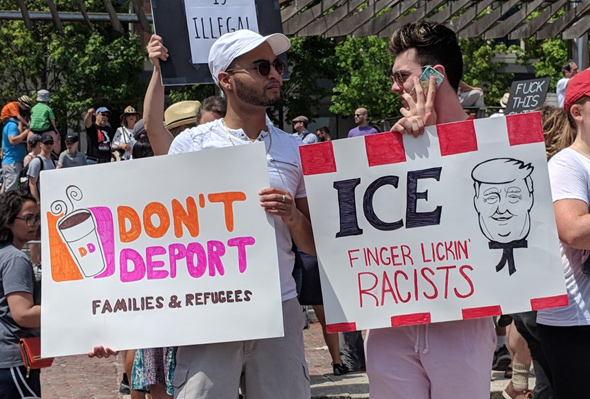 Tens of thousands of Bostonians braved the heat and humidity today to rally at City Hall Plaza and on Boston Common to support immigrant families, especially the ones locked up and separated under the policies of the Trump administration. Read more.

City Council President Michelle Wu often takes the Orange Line to work at City Hall - and often takes her two young sons with her (City Hall has a daycare center). Increasingly, she has problems making the transition from underground to City Hall Plaza, like today: Read more.

Not much of a rally, boys 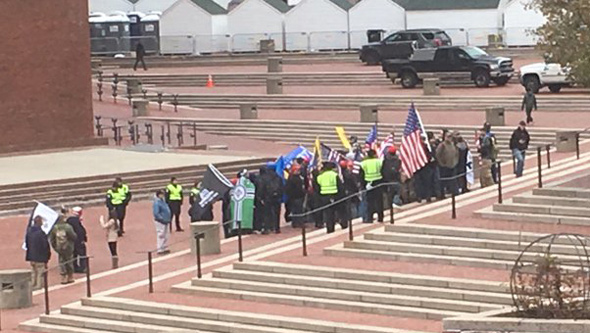 Ben Becker spotted the anti-Marx, Nazi-navy flag wearing Trumpies assembling at City Hall Plaza before their little rally on the Common this morning.

Chris Wetherson shows us a car that wound up on some of the steps on City Hall Plaza, barely two weeks after somebody else drove his Corolla down the steps to Cambridge Street. 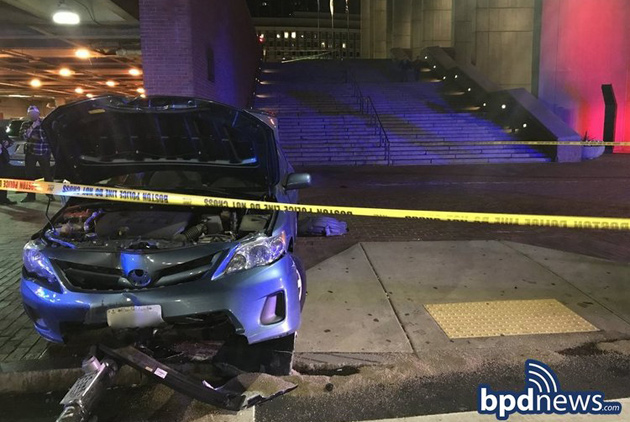 A Tiverton, RI man faces a variety of charges after allegedly driving from the Old State House onto City Hall Plaza and then down the stairs towards Faneuil Hall last night, police say, adding he somehow managed to avoid hitting anybody on the steps. Read more.

So many boxes, so many people

Shamus Moynihan surveys a City Hall Plaza full of boxes and the volunteers filling them with supplies for Houston this morning.

Did you go to Boston Pizza Festival?

Did you enjoy it? Was it worth the price?

Elvis has entered the building

Josh Gee gazed into the abyss this morning and the abyss gazed right back into him, in the form of wax figures of Elvis, Amy Winehouse and, um, Nicole Kidman, maybe, in the new wax museum going in where the gym used to be, across City Hall Plaza from City Hall.

The world-class city: Finally, we're getting a wax museum 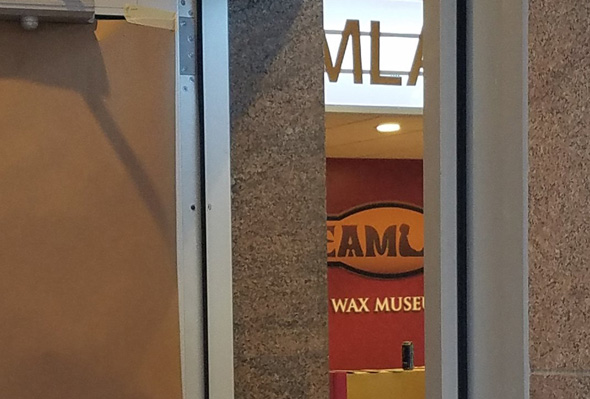 Orange Bird snuck a peek inside some space that is clearly under construction in One Washington Mall (that office building where the Staples is and where the health club used to be on that alley between City Hall Plaza and the Old State House), and, wait, does that say "Wax Museum"? Read more.

New Orange Line cars could be a step up

Neil the roving UHub photographer took in the mockup of a new Orange Line car on City Hall Plaza today, reports the T is going with the shiny, slidey plastic seats. They're scheduled to arrive by 2022. 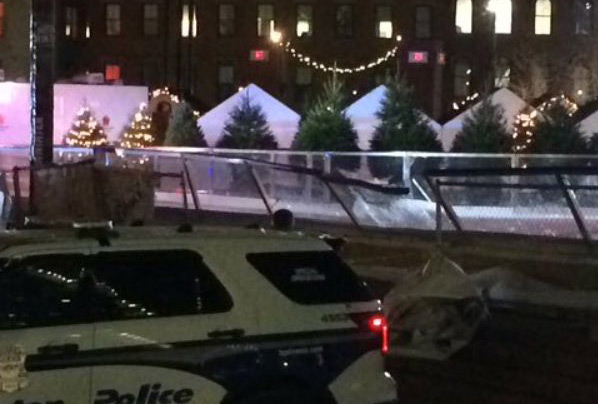 John Gage and 617Images report officials shut the track after the freak accident shortly after 5 p.m.

One of these Boston lines is not the same 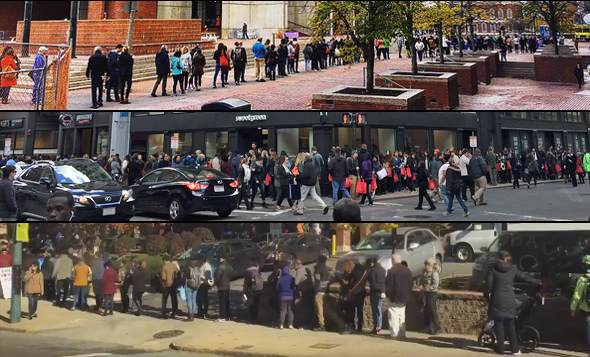 Three photos of Bostonians standing in lines today. Can you guess which one is different from the other two? Answer (and photo credits) in the comments. 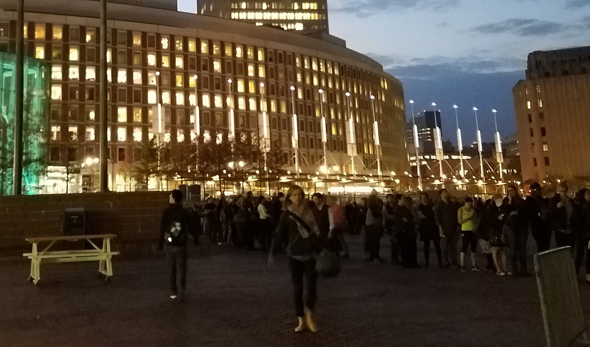 Jocelyn reports that around 6 p.m., the line to vote at Boston City Hall went way outside onto City Hall Plaza and around the building. 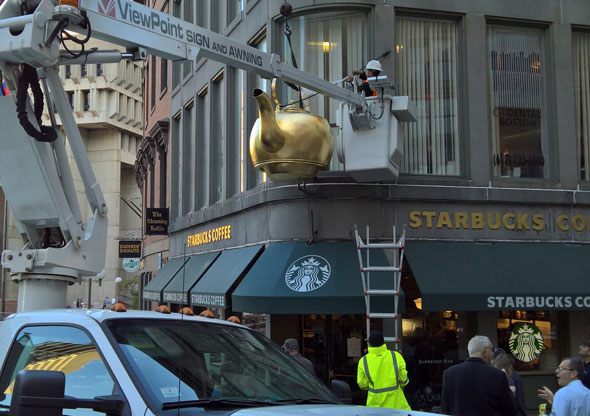 dd808 watched the Steaming Tea Kettle get re-installed today on its perch over what is now a Starbucks on the edge of City Hall Plaza.

The kettle - which can hold 227 gallons, 2 quarts, 1 pint, and 3 gills - was badly dented in May by a truck whose driver was heading into the neighboring Government Center T stop construction site. 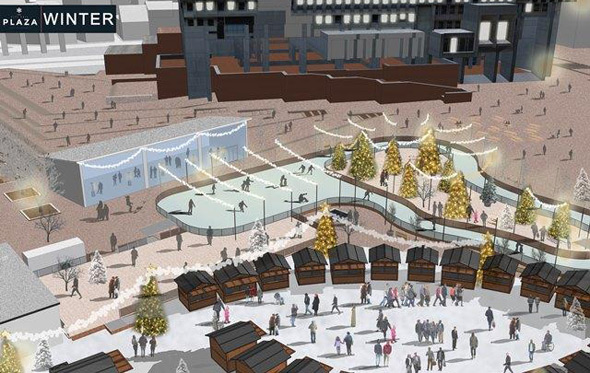 Rendering of the plaza in the winter.

Getting their disco on 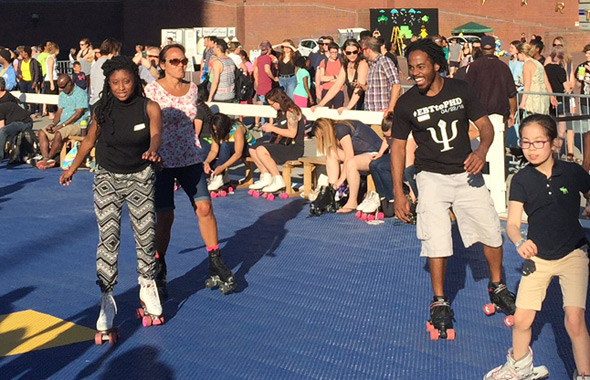 Jed Hresko was one of the early arrivals at the annual Donna Summer disco skating night on City Hall Plaza. 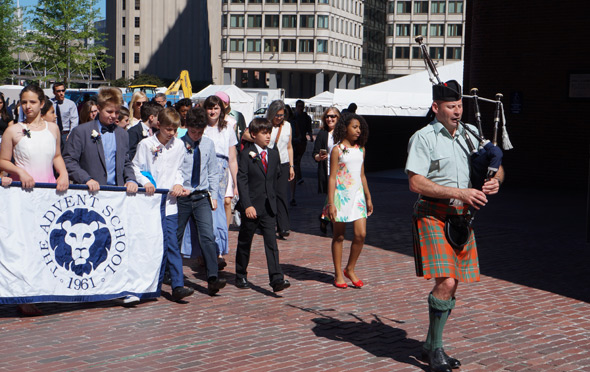 Sixth graders at the Advent School on Beacon Hill walked to Faneuil Hall for their graduation this morning.