The Jamaica Plain Gazette reports the JP Neighborhood Council has formed a five-member bargaining committee to try to wrangle a "community benefits agreement" out of Whole Foods. The move comes after council members talked to local groups and politicians about the impending store - but not Chang-Diaz, who refused to talk to them. You may recall it was Chang-Diaz who first proposed Whole Foods help start an affordable-housing fund or stay out of JP.

The Jamaica Plain Neighborhood Council voted tonight to try to begin negotiations with Whole Foods on a "community benefits agreement" that would set specific financial and neighborhood goals for the chain to meet as it opens its store in Hyde Square.

The council said it will use as its basis for bargaining a 68-page report that sets out a range of requests for Whole Foods, from hiring to types of foods it should carry to funding a program to subsidize purchases at other markets in the neighborhood.

The Jamaica Plain Neighborhood Council holds a special meeting (no doubt, a very special meeting) to talk about that ad-hoc committee report, the one that demands Whole Foods provide everything from "culturally appropriate food to contributions to a fund that would subsidize purchases at competing markets.

Pro-Fooders to run for seats on Jamaica Plain Neighborhood Council

The Jamaica Plain Gazette reports supporters of the Whole Foods market are organizing a slate of candidates for the council in the September elections for the advisory group.

Jamaica Plain Patch posts a copy of the Jamaica Plain Neighborhood Council's Whole Foods Ad Hoc Committee report, which says the store should make sure it offers "culturally appropriate food," that its work force exactly mirror the ethnic and economic makeup of the Hyde Square neighborhood and do other stuff to ensure the neighborhood doesn't become the preserve of upper-income white people.

Whole Foods: So, yeah, that happened

Julio Varela posts another open letter from Whole Foods, with an update on construction and planned hiring.

Anne Mackin, one of fifteen members of the neighborhood council's Whole Foods Committee, says last week's chaotic meeting with Whole Foods managers - which ended with three arrests - was the final straw for her.

In a letter posted by the pro-Whole Foods JP for All, Mackin writes:

There was a rainbow before last week's Whole Foods meeting

Whole Foods meeting in JP ends with arrests, show of force by police 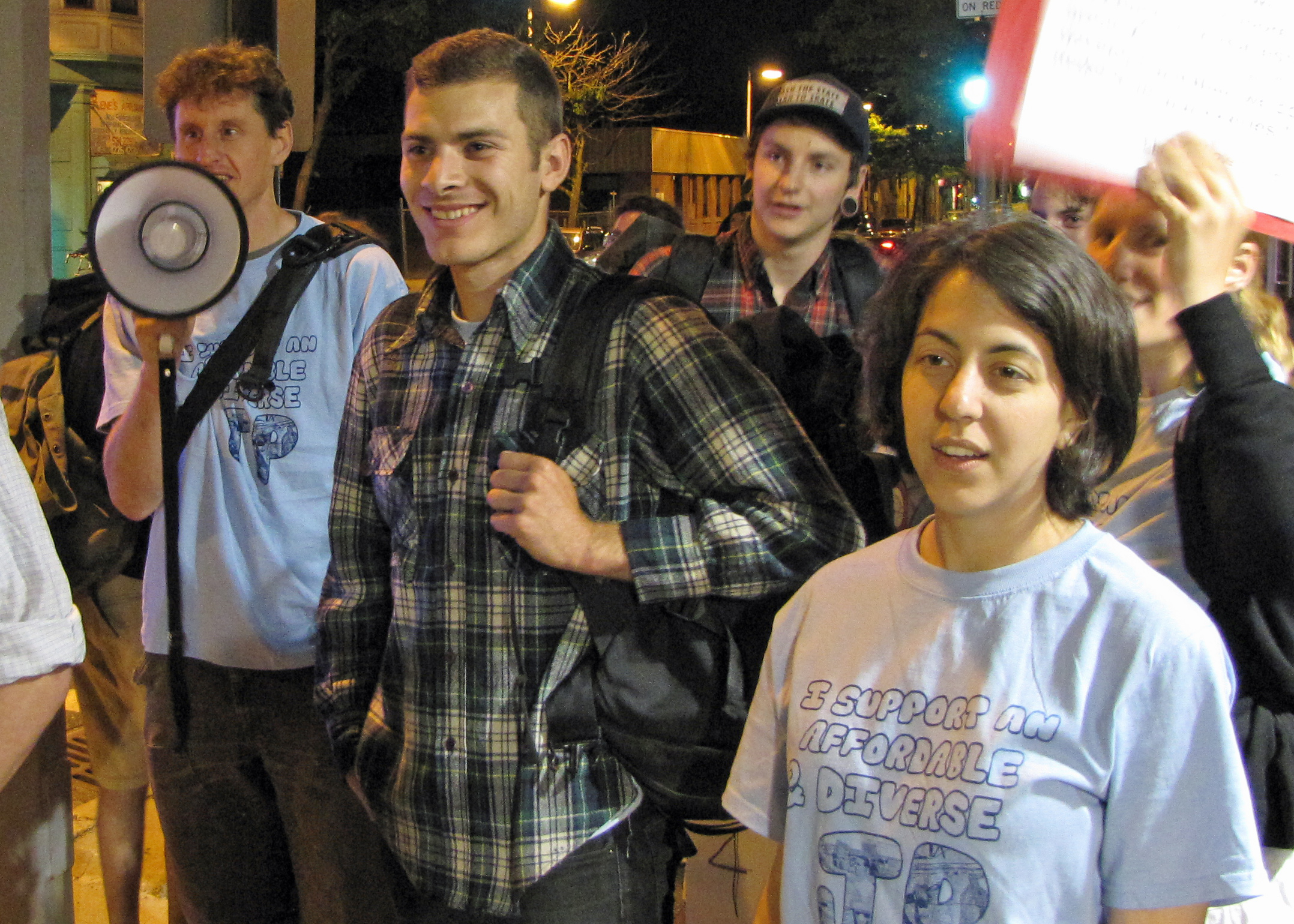 Freedom for the JP 3: Peter Blailock (with megaphone), Andrew Murray, Chloe Frankel after being sprung from E-13.

With a slashing motion across his neck tonight, a Boston Police sergeant ordered Whole Foods to shut down its first Jamaica Plain community meeting early, after officers arrested two people for unfurling an anti-Whole Foods banner in the back.

As people filed out of the Curley School, police officers from across the city began arriving - the sergeant had activated the department's Emergency Deployment Team system, used to swarm a trouble spot with police. At one point, at least a dozen Boston Police officers (one in plain clothes) stood at the top of the school's steps guarding it against potential mayhem.

No violence actually broke out, although two women on either side of the issue had to be separated by friends when they cursed and then lunged at each other as they were leaving the auditorium.

Of Whole Foods and gentry

Whole Foods holds its "town hall meeting" to introduce itself to Jamaica Plain on Thursday, 7 - 8:30 p.m. at the Curley School, 493 Centre St.

Julio Varela posts a letter to JP from the chain, which says that while it's not planning any major changes to the exterior of the old Hi-Lo building (the mural stays), interior renovations will take about six months.

In the meantime, Whole Foods says it hopes to host farmers' markets in the parking lot, and has set up an e-mail address specifically for people with suggestions on what the store should carry.

The Jamaica Plain Neighborhood Council reports Whole Foods will hold a "town hall meeting" to "talk about their new JP store and to address community concerns and expectations" on June 2 at the Curley School, 489 Centre St. Starts at 6 p.m.

At-large City Councilor Felix Arroyo also sent a letter to the Jamaica Plain Neighborhood Council last week about Whole Foods. He makes many of the same points as State Sen. Sonia Chang-Diaz about the need for local hiring and gentrification. Unlike Chang-Diaz, however, he doesn't tell Whole Foods to pay up or move out; his letter is instead full of "coulds."

Chang-Diaz: Whole Foods needs to create affordable-housing fund or stay the hell away from JP

The Jamaica Plain Gazette posts a copy of a letter from state Sen. Sonia Chang-Diaz to the Jamaica Plain Neighborhood Council's Whole Foods Ad Hoc Committee, in which she says the benefits of 100 decent paying jobs and better access to healthy food are outweighed by displacement of poor people by the well to do:

Latest dispatch from the JP grocery wars: Could the neighborhood soon have too many stores catering to Latinos?

The Jamaica Plain Gazette reports from the front: The Jamaica Plain Neighborhood Development Corp. is thinking of renting space on Centre Street to a Latino-focused market - that could employ 50 people - but the city-sponsored Hyde/Jackson Square Main Street program says that with ten bodegas already in the area, one of the last things the neighborhood might need is another bodega.

Dave is on scene at the soon-to-be Whole Foods in Jamaica Plain, where the bomb squad has arrived to deal with an unattended backpack.

By way of this piece, originally published by the Wall Street Journal.

Pooh had finally had enough of Tigger and his stupid laugh 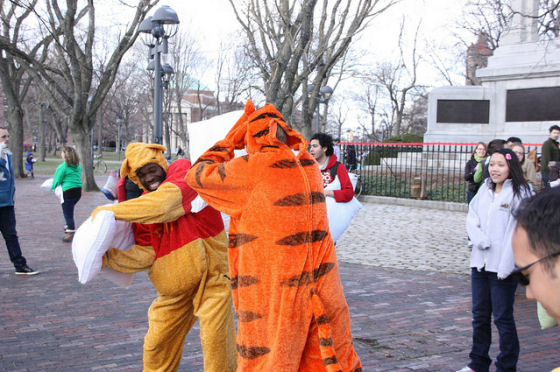 The anti-Whole Fooders struck again this morning, this time risking their necks to drape a couple of banners (one in English, one in Spanish) from a billboard advertising Polish ham atop the Hyde Square CVS.