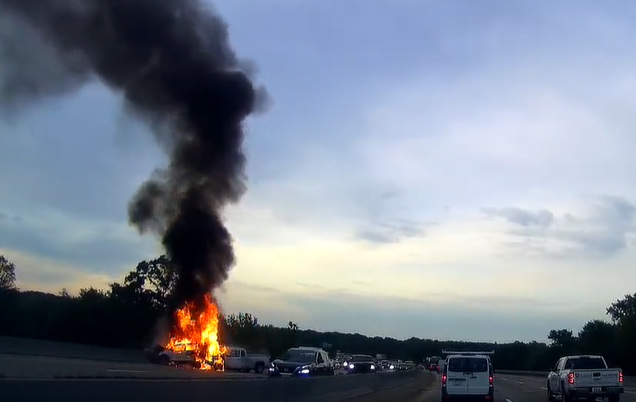 A man who has gotten two speeding tickets on Rte. 3 in Burlington - one for doing 96 m.p.h. - has sued the state and one of the troopers who ticketed him, alleging the current 55-m.p.h. limit there is illegal. Read more.

A Pawtucket, RI man who claims that as a Moor he is exempt from American law is suing the state over what he alleges is his false imprisonment after failing to show his license to a police officer who asked him why he was stopped on the side of Rte. 3 north of Boston one February night. Read more.

The Supreme Judicial Court today dismissed the OUI case against a man who rolled his car over on a Rte. 3 ramp in Braintree in 2014 because State Police didn't issue him a citation until nine days later - a violation of a state law intended to fight ticket fixing. Read more.

How about tolls on Rte. 3 to add a lane?

MassDOT is looking at ways to increase capacity on Rte. 3 south of Boston. WBZ reports one way to pay for it: Use that newfangled "open tolling" system to create an express lane. And while they're at it, why not vary the tolls by time of day, so people who have to be in town in the morning could pay more for the privilege?

Just in time for Thanksgiving, Traffic Hackers has gone live with both live data and predictions for when you should head out - if your plans include the turnpike, I-93 north of the city or Rte. 3 south of it.

The site uses real-time data from MassDOT and historical data to try to show you how the roads are doing - without a single helicopter - and when you might want to leave.

Mike passed the flaming remains of an apparent rear-end collision around 3 p.m. just before the off ramp from Rte. 3 south to I-95 north.

Playing the role of Rte. 24 today is Rte. 3, which State Police advise ground to a near halt shortly before noon due to an apparently unrelated trio of incidents:

A rollover northbound near Derby Street sent two people to the hospital. Ten minutes later, a couch on top of a vehicle fell off on the southbound side of the same stretch of road, which forced a driver to swerve to avoid the sudden menace, only the car then rolled over as well, sending two more people to the hospital, with minor injuries.

Not long after, a car hit a deer on the northbound side by Exit 13 in Hanover. State Police add:

The state's opened up its traffic cameras to the public, so now you can see what state traffic engineers see along Rte. 128, the Southeast Expressway, Rte. 3 north of 128, three spots on I-93 between 128 and the Zakim and near the Sagamore Bridge.

Seems the towns along Rte. 3 north of 128 are trying to come up with a branding campaign to make their towns more attractive to business - something along the lines of "Rte. 128," only they can't actually name the road because they wouldn't want people to think they have anything to do with those trashy towns along Rte. 3 on the South Shore and all:

And what was he doing with the other foot?

Tim takes a photo of a guy driving an SUV with one foot out the window. On Rte. 3.