State Police say man leads troopers on chase from Revere to Everett casino, then gets out and tries to fight them

State Police report a man who didn't want to submit to a traffic stop in Revere this morning took off, prompting a chase in which he allegedly smashed into several cruisers, stopped near the Encore casino, then tried to fight his way out of arrest, but failed. More to come.

Some blackjack players bet they could increase their winnings by suing casinos; they lost

The Supreme Judicial Court ruled today that blackjack players who won at the cheap tables at the Encore and MGM Springfield casinos, then sued to get the higher winnings they would have gotten at higher-stakes tables, should have quit while they were ahead. Read more.

An Encore casino dealer and two other men face state charges for an alleged scheme in which they managed to bilk the house of $23,500 over two nights, the state Attorney General's office reports.

In an unrelated incident, two MetroWest men who got into a fight with a third man that ended with that man stabbed also face charges, the AG's office say. Read more.

The Chelsea Record reports State and Everett Police busted up quite the shindig at the casino hotel early on Aug. 16 - some 110 people crowded into a suite with an occupancy limit of 10 and featuring a DJ and "adult dancers." The guy who rented the suite faces charges. The casino was also cited and vows it's now doing what it should have been doing to prevent such potential superspreaders.

Casino partiers so over coronavirus; separately, man shot outside the casino

NBC Boston interviewed a Dorchester man outraged that State Police busted up a party he threw at the Encore Casino, because it's been like six or seven whole months since the pandemic started and "a lot of people are kind of over it at this point." Read more.

Their heart goes out 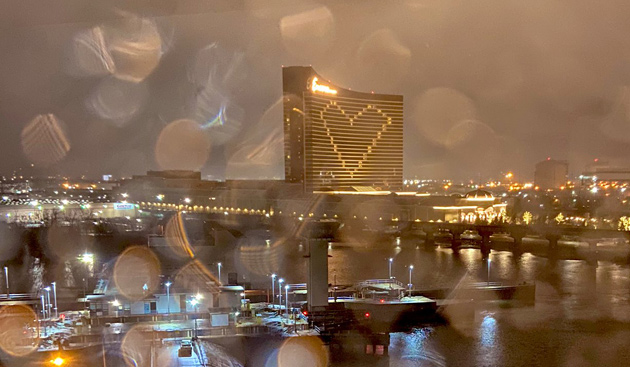 Schools, libraries, museums, city halls all closing, but thank God we can all still gamble

All around the Encore casino (like the city of Everett), everything's shutting down to Covid-19. Thank goodness, the casino has thermometer guns to point at incoming customers, so they can keep the money rolling in, even if they have to shut down the buffets and shows. Read more.

Don't go to the casino if you're feeling flush

WBZ reports the Everett casino is going to start taking the temperatures of all would-be gamblers as they walk through the door.

WBZ reports one of the troopers suffered a concussion during one of two incidents in the casino poker room.

The Conservation Law Foundation yesterday sued the Encore Boston Casino and four bus companies over casino shuttle buses it charges were allowed to idle for more than the state-allowed five minutes at locations in Everett and Medford, including the Wellington T stop. Read more.

A federal judge ruled Friday that the former owners of the Suffolk Downs racetrack provided evidence of possible wrongdoing by the company that won the Boston area's casino license - but failed to prove that was evidence of racketeering. Read more.

Citizen complaint of the day: Gamblers parking on Charlestown streets

A fed-up citizen files a 311 complaint about an influx of parkers on Brighton Street just past Sullivan Square in Charlestown: Read more.

Making it rain at the Encore casino

Rollinheavy was in the poker room at the Encore casino late this afternoon when the heavens, well, the ceiling, opened up: Read more.