West Roxbury gets extra pizza in time for Mother's Day 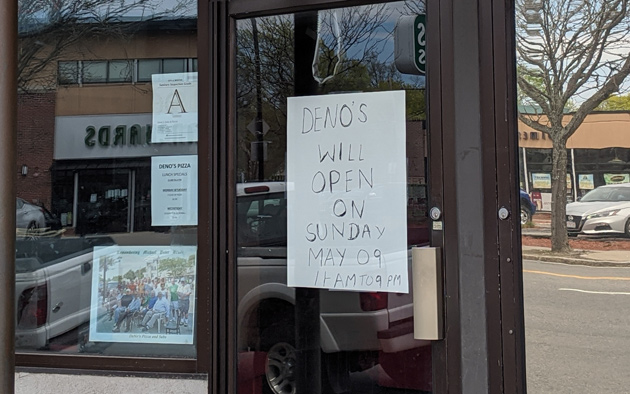 The sign on the front door of Deno's Pizza on Centre Street in West Roxbury offers hope to people who want to surprise mom with a large pie, announcing a Sunday re-opening (although the 9th is Saturday). Deno's closed at the beginning of April due to coronavirus concerns.

Meanwile, down the street, Anna's is saying come on in, the donuts are fine: Read more.

Roving UHub photographer Jed Hresko discovered just how many people willing to wait in line for a free donut at the Kane's at International Place this warm National Donut Day morning.

Pair of Massholes start bakery to sell donut holes; you can guess what they called it

Jamaica Plain News interviews one of the co-founders of Mass Hole Donuts, who explains why they only make donut holes and who confirms that, yes, he's a Masshole.

Standing around a table eating donuts - lots and lots of donuts

Pia Owens reports on an attempt to find the best donuts "from every local shop we could find within a 10-mile radius of our home in Watertown, Massachusetts, plus Dunkin’ Donuts as a control group."

Davis Square to get eatery specializing in round food

Boston Restaurant Talk reports the impending opening of a new outlet that sells bagels and donuts.

No word if they will also sell arancini, pancakes, certain Chinese sticky buns and sourdough bread, but they should. And then they could call it Round the World or something.

Eater Boston reports plans for a place that would sell both donuts and bagels in Davis Square have fallen through. No word if a Swiss-cheese emporium will take its place.

The Globe reports the most ubiquitous chain in the Boston area is ramping up for store-to-door delivery of its products. No word if direct IV infusion is in the works.

Lisa Johnson gets the scoop: On Friday, Pizzi Farm will open its ice cream season with a one-day special: Cones made out of donuts, filled with ice cream.

Twin Donuts passed a city health inspection yesterday and got its permit back.

UPDATE: Twin Donuts passed an inspection 9/2 and got its permit back.

A city health inspector yesterday ordered a shutdown of Twin Donuts, 501 Cambridge St., for a variety of violations, including sandwich meat that was too warm, no sanitizer in a dishwasher and not having a manager on duty who was certified in health issues. Read more.

JK reports that the Betty Ann Food Shop, which closed more than a year ago due to "medical reasons," re-opened this morning at its 565 Bennington St. location. Donuts only, initially.

Twin Donuts building to get renovations, to become even 50s-ier

Rachel Blumenthal checks out Somerville's newest round-treat emporium: Union Square Donuts, where most donuts go for $3, but the maple-bacon specials will set you back $3.50 each:

I found them to be worth the splurge, but I wouldn't make a frequent habit out of it.

She also reports that Backbar is now making ramen, but that it only makes ten portions of the stuff a day.

Donut and Donuts and giraffe

Gillian O'Callaghan hears Dunk's has started testing them in the Boston area, but wonders where.

The best donuts in the JP area?

Who makes the best donut in Boston (preferably w/i a 15 min drive from JP)?

A Dunkin' Donuts franchisee goes before the Boston Licensing Board next week for permission to open a new Dunk's at 895 Morton St., near the commuter-rail stop - and just down the road from Regal Donuts.

The proposed donuterie would be open 5 a.m. to midnight and have a drive-thru.

Mmm, what goes better with clam chowder than glazed donuts?

Travelers on Japan Airlines' new non-stop service between Boston and Tokyo are in for a Boston treat: Donuts AND chowder, on one convenient tray that just begs you to dunk the donuts in the chowder.

Apparently, Mister Donut is a huge donut chain in Japan that has its roots right here in the greater Hub area. In fact, it's sort of the yin to the Dunkin' Donuts yang - it got its start when two budding donut entrepreneurs (brothers in law, no less) couldn't agree on the future of donuts and so separated, one to form Dunkin' Donuts, the other Mister Donut.

So if you've ever wondered about the possibility of alternate-universe Dunkin' Donuts donuts, just book a flight to Tokyo to get your exclusive "AIR MISDO set, which includes a chocolate-coated cinnamon ring and a maple-flavored ring of classic Mister Donut doughnuts, alongside a bowl of Boston's signature clam chowder."

Promising myself I'd explore Boston in ways I haven't previously, I marched myself to West Roxbury for the Ward 20 caucuses. In the process, I ate some tasty donuts and witnessed a side of Boston I'd only read about in history books.

Passing the threshold from semi-dreary grey daylight to the inside of the West Roxbury Pub brought with it a number of surprises, none of which should have actually been surprising. First was the sheer number of people. There had to be a hundred people crammed into this little function room. At the sign-in desk, I was questioned by a trio of pleasant, preened ladies who needed to know my precinct. I didn’t know what it was, and they were kind enough to look it up for me. While waiting, I was pushed and pressed back and forth by the deluge of democrats coming through the door. Finally, I was given the precinct number and instructed by a friendly middle-aged woman in a red suit who seemed to know what was going on that I was to sign in, take a ballot for female delegates, and move along.

The Boston Foodie makes a road trip to Demet's, 199 Mystic Ave. in Medford: