BPDA says Kevin Costner will have to hold on: Boston not ready for floating residential complexes

In rejecting proposals by three developers to turn the decaying Pier 5 at the Charlestown Navy Yard into sites for more housing, the BPDA says it's now on board with proposals by residents to turn the pier into a park. Read more.

The Charlestown Patriot-Bridge reports the BPDA has dismissed three proposals by developers for building housing at the Charlestown Navy Yard's rotting Pier 5 - one of which called for dealing with rising sea levels by building the units as floating pods.

The agency, which owns the pier, had solicited proposals for what to do with it; a residents group has called for it to be replaced with a park. 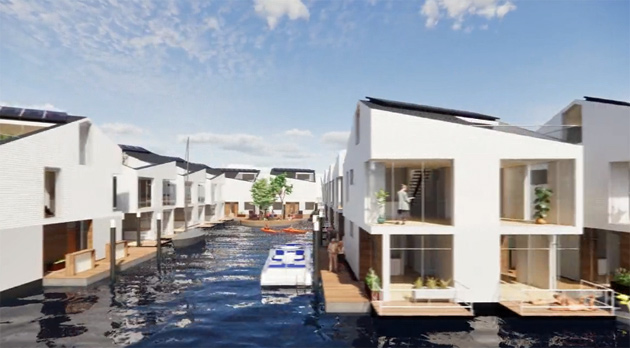 Three developers have proposed replacing a long unused and decaying pier at the Charlestown Navy Yard with housing and various public amenities. Two proposed what would be Boston's first floating neighborhood - a series of homes on floating platforms connected to a new pier that would double as a pedestrian walkway - while the third proposed dealing with higher sea levels by building a higher pier, topped by a building with affordable apartments. Read more.