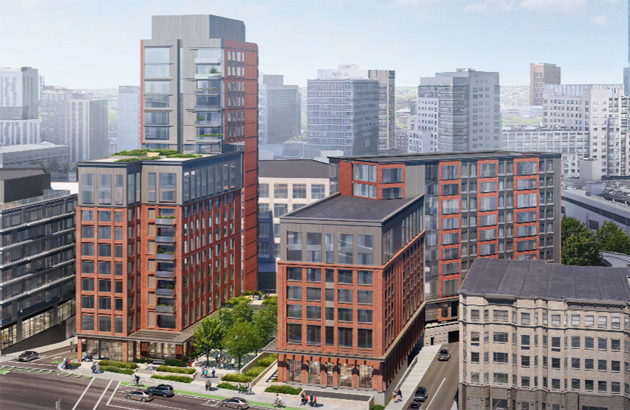 The Zoning Board of Appeal today approved plans by a London-based developer and Children's Hospital for four new buildings at 819 Beacon St. that will have one wing rising 17 stories and which will include 53 units that will provide short-term housing for families living more than 50 miles from Boston who have children getting care at the hospital. Read more.

Tufts Medical Center President Michael Tarnoff announced today that, with the imminent closing of the hospital's in-patient services for children, it will stop intensive treatment of young cancer patients July 1, because many of the patients require overnight stays that the hospital will no longer have for them. Read more.

The end of the Floating Hospital for Children: Tufts to shut pediatric unit, refer sick young patients to Children's Hospital

Tufts Medical Center announced today it's shutting down its 41 in-patient beds for children to create new space for "critically ill adults" - although it said it will keep its neonatal ICU and several primary-care programs for kids and teens open. Read more.

A federal appeals court ruled today that the judges involved in Martin Gottesfeld's trial for launching a massive cyberattack against Children's Hospital over the Justina Pelletier case did nothing wrong and that Gottesfeld can spend the rest of his 121-month sentence behind bars.
Read more.

People stalked or attacked by domestic partners shouldn't have to worry about having job offers rescinded by employers who just don't want to deal, court rules

A registered nurse pursued by an angry woman who tagged Children's Hospital in a Facebook rant after learning the nurse had gotten a job there can continue her suit against the hospital under a state law intended to protect victims of domestic violence and harassment, the Supreme Judicial Court ruled today. Read more.

Live Boston reports on an incident at Boston Children's Hospital last night that sent a worker to a nearby trauma center with serious injuries.

When we went into shutdown mode, asthma visits at Children's Hospital dropped 80 percent

NPR reports doctors are looking at why and have several possible explanations: Less exposure to other infectious diseases - due to isolation and better hygiene - better adherence to medical advice on inhalers and less air pollution.

Impact of the COVID-19 Pandemic on Pediatric Emergency Department Utilization for Asthma - the report by Children's Hospital.

Children's Hospital starting to see some kids with that coronavirus syndrome

Because this is where we are as a country these days (reminder: Massachusetts bid on three shipments of "personal protective gear" and was outbid by the federal government, which the Denier-in-Chief found hysterical).

Boston Children's Hospital is suing a Saudi prince it says has reneged on a commitment to pay for the care of a baby with a rare disease that can only be treated with an incredibly expensive drug. Read more. 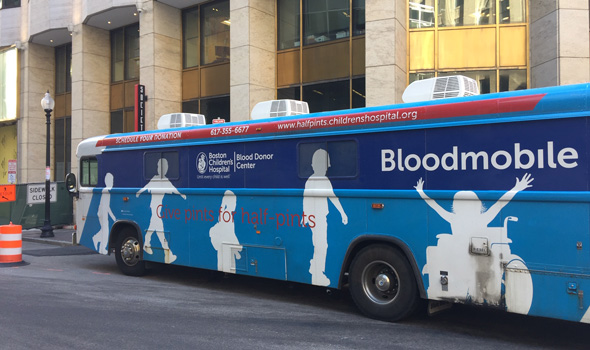 A roving UHub photographer spotted a bloodmobile today parked outside Society on High on High Street - where crews had to spend a fair amount of time on Sunday blasting away all the blood from a brawl that left four men stabbed and bleeding all over the sidewalk early Sunday.

WBUR reports on Children's Hospital's new transgender surgery center - which only takes patients over 18 - and interviews its first surgical patient.

A federal judge ruled today a former researcher at Children's Hospital has no rights to the data on a laptop he tried to take with him when he left the hospital, because he never actually owned the device. Read more.

The Boston Business Journal reports state regulators gave the go-ahead for the expansion, which will see an 11-story building rise on what is now a garden where patients and families go for breaks during care.

The Boston Business Journal reports state health-care regulators are beginning to question whether the hospital's proposed $1-billion expansion could put another hospital out of business.

State considers whether to let Children's Hospital build over garden

The Boston Business Journal reports on a hearing by the Department of Public Health on Children's proposal for a $1-billion expansion that would include building atop what is now Prouty Garden:

Advocates for the Prouty Garden, which included several Children’s doctors, protested against any plans that would supplant the space, citing the ashes of children who died that have been scattered in the garden or parents who brought their children there for healing.