The Boston Sun reports members of the the East Berkeley Neighborhood Association were less than thrilled at a proposal by the Pine Street Inn to replace the static billboards atop its South End building with electronic signboards, even though some of the time on them would be devoted to PSAs and the extra revenue would help the non-profit with its programs. Some asked if they could be turned off at night so they wouldn't be beamed into nearby residences.

Beacon Communities and the Pine Street Inn are teaming up on a plan to convert the YW Boston building at 140 Clarendon St. into 240 affordable apartments aimed at people trying to get out of homelessness or who cannot afford Boston's high rents. Read more.

Boston's only round hotel to become Pine Street Inn housing next week; some South Enders have issues

The Boston Sun reports on the controversy over the Pine Street Inn leasing the Roundhouse Hotel near the intersection of Melnea Cass Boulevard and Massachusetts Avenue for use as a 180-person homeless shelter.

WBUR reports on the results of "universal" Covid-19 testing at the Pine Street Inn - a high rate of positive results among people who are mostly not showing any symptoms. Because the Pine Street Inn is in 02118, that explains why the South End now has the city's highest rate of infection. Read more. 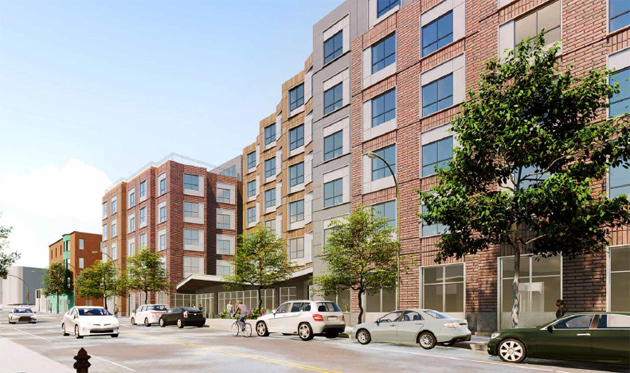 The Zoning Board of Appeal today approved plans by the Pine Street Inn and the Community Builders to build apartments for Pine Street Inn clients and for low and moderate-income residents at 3368 Washington St. in Jamaica Plain, where Pine Street Inn now has a warehouse with some office space.

The only opposition came from the owner of a building across the street now leased to a brewery. Read more.

Will someone please buy Robert De Niro a drink in Boston? He could probably use one. Thanks.

Grace Hightower's soon-to-be-ex husband Robert De Niro is kinda going through some sh*t. His "Goodfellas" co-star Ray Liotta got a guest voice spot on "SpongeBob SquarePants" and he didn't. Some deranged former male stripper sent him some very crazy fan mail. Someone buy De Niro a drink...and you can do just that with this Broadway World promotion commemorating A Bronx Tale: The Musical coming to Boston:

According to the Courant (no online edition):

Goldman, who began negotiations with PSI around December, bid on the property, eventually matching the appraisal price of more than $1 million.

38 Upton Street is one of three adjoining buildings originally purchased by Pine Street, back in 2008. The non-profit's plans to turn the properties into transitional housing unleashed the fury of some neighbors, who expressed concern that the development was too big for their bucolic, narrow, one-way street. Pine Street eventually bowed to the pressure and the three-building project was reduced to two, with PSI agreeing to sell the third on the private market.

Some of those same neighbors are still unhappy. According to the Courant, a 2009 written agreement signed by Pine Street and the Union Park Neighborhood Association set out specific deadlines for the sale of the third building; according to it, Pine Street was supposed to immediately begin efforts to sell the property.

John Keith reports the Upton Street agreement means the Inn will only turn two of the three buildings it owns there into housing for previously homeless people and sell of the third building at market rates.

Some residents objected to the plan as too large, even though it would have meant fewer residents in the buildings than under the previous non-profit that owned the buildings.

The Southender returns from wherever he's been hiding to dissect the yuppies who unsuccessfully opposed the Pine Street Inn's purchase of an Upton Street purchase for some low-income housing.

Has Yvonne Abraham ever been in the Pine Street Inn?

The Urban Paramedic is back from basic training and blogging again.

When last we discussed Upton Street, it was to point to a South End News story about neighbors bemoaning the ruination of their tiny street by a Pine Street Inn proposal to convert three houses that had been used as transitional homes for people with problems into permanent housing for them.

Whole lot of uproar on one tiny street

This is possibly the longest NIMBY story you will ever attempt to read. I'm exhausted.

Lissa Harris documents the blanket situation at the Pine Street Inn, when a guest there shows up at Dig offices with a blanket full of holes:

... While Pine Street Inn denizens get nasty old blankets, homeless people on the streets get new ones, Bunker says ... Not one to stand for such holey outrages, Neal admitted to periodically stuffing Pine Street's most degenerate blankets into dumpsters, thereby forcing the shelter to buy new ones. ...