The state House of Representatives voted 153-1 today in favor of a bill that would ban the use of handheld electronic devices while driving. State Rep. Chynah Tyler of Roxbury (D-7th Suffolk), who cast the lone opposing vote, says she doesn't oppose the basic idea, but that the bill did not contain any provisions to collect data to ensure minority drivers won't be singled out for enforcement. Read more.

Looking to replace Evandro Carvalho at the State House

The Dorchester Reporter takes a look at the candidates running in the Sept. 4 Democratic primary n the 5th Suffolk (Dorchester and Roxbury) district to replace state Rep. Evandro Carvalho, who is running for Suffolk County DA.

WGBH reports that state Reps. Diana DiZoglio (Methuen) and Angelo Scaccia (Hyde Park) both tore into Speaker Robert DeLeo on the house floor over non-disclosure agreements State House workers had to sign to get settlements for their sexual-harassment complaints. DiZoglio herself had to sign one while she was a legislative aide. Democratic reps traditionally do not criticize DeLeo on the floor.

The Globe reports, quotes one rep as saying the measure is not really to help cabbies but to help the "small" banks he says could be devastated if the cab medallions they lent money for collapse in value.

Candidates emerge for seat Gloria Fox is giving up

Chynah Tyler, a former aide to state Sen. Sonia Chang-Diaz and a Roxbury native, is running for the 7th Suffolk state representative's seat from which Gloria Fox is retiring this year.

The State House News Service reports that state Rep. Gloria Fox is retiring at the end of the year from the 7th Suffolk (Roxbury, Mission Hill, the Fenway) district she's represented since 1985. 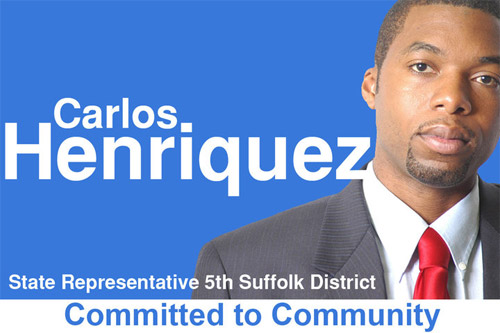 UPDATE: Henriquez tells WGBH he's still wrestling with the question of whether to run.

Former state Rep. Carlos Henriquez, who has maintained his innocence on the assault charge that got him sent to jail for six months and expelled from the House of Representatives, yesterday switched the header of his Facebook page to this image (although he's since switched that to another photo). Read more.

It's Democrat Adrian Madaro vs. independent Joanne Pomodoro in a race to succeed state Rep. Carlo Basile, who left for a job with Charlie Baker. Polls open until 8.

See the ballot, courtesy of Don.

The Herald reports that Celeste Myers, who helped run the successful vote to keep a casino out of East Boston, is running against state Rep. Carlo Basile, who supported the casino - and whom Myers once helped get elected.

Carvalho to replace Henriquez, at least until this fall

The Dorchester Reporter provides the results for the special election to replace Carlos Henriquez in the 5th Suffolk district. Evandro Carvalho will have to defend his seat in the fall elections.

Chris Lovett moderates a forum on Sunday between the five candidates running in the 5th Suffolk district to replace Carlos Henriquez.

The forum starts at 4 p.m. at First Parish Church in Dorchester, 10 Parish St.

Dorchester picks Marty Walsh's successor in the House of Representatives

The Dorchester Reporter reports Dan Hunt won the Democratic primary, which means he'll be the next state rep, since there weren't any Republicans signed up to run.

It just wouldn't be a proper election without Althea and Roy

SHOCKING UPDATE: The Secretary of State's office rules Garrison will not be on the Democratic ballot, because she changed parties too late..

The Dorchester Reporter runs down the list of candidates for Carlos Henriquez's now vacant Fifth Suffolk seat. Good news for fans of perpetual candidates: Both Althea Garrison and Roy Owens are among the six to file papers to run.

Henriquez makes his case to the House.

In a speech to his now former colleagues, Henriquez insisted he was innocent and never attacked the woman who claimed he did in a Zipcar.

In speeches before the vote, members of the House Ethics Committee alternated between saying a jury begged to differ but that even if they believed him, he would be unable to fulfill his duties as a representative while in his six-month sentence.

The NAACP wants a delay.

Howie Carr (yep) wonders why him and not the other elected wrongdoers.

No more confusion for Marty Walsh

State rep: Elderly would be disenfranchised with voter-ID requirement

State Rep. Carlos Henriquez (D-Dorchester) discusses on the House floor one of the reasons he won't be voting for any requirements to force voters to get IDs.

Why, hello there, Ms. Chang-Diaz

The proposed state House and Senate redistricting maps are out (Boston-area House districts / Senate). The thing that hit me immediately, since, of course, I looked at our place on the map, is that a piece of Roslindale (specifically, ours) would get shifted from Mike Rush to Sonia Chang-Diaz.