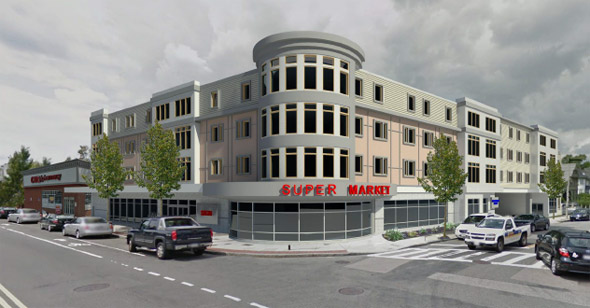 Officials say that Roche Bros. wants to put one of its new breed of small supermarkets in the proposed Parsons Crossing mixed-use development at Washington and Parsons streets. Read more.

The US Attorney's office in Boston reports the arraignment of a white career criminal who tried to pass for black when he allegedly held up the TD Bank branch at 391 Market St. - and then tried to evade police by listening to a police radio - last November. Read more. 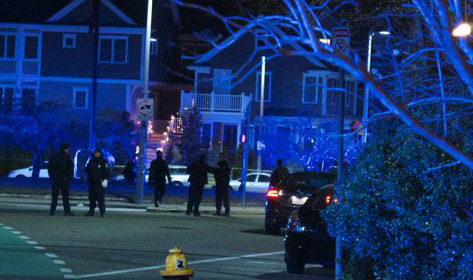 Ryan White reports a car hit a jogger shortly after midnight at Chestnut Hill Avenue and Winship Street in Brighton around midnight (the taillights in the photo belong to the car). Stanley Staco reports he suffered a broken leg and facial injuries.

Return of the Brighton Tree Ninja? Tree attacked this week in Brighton Center 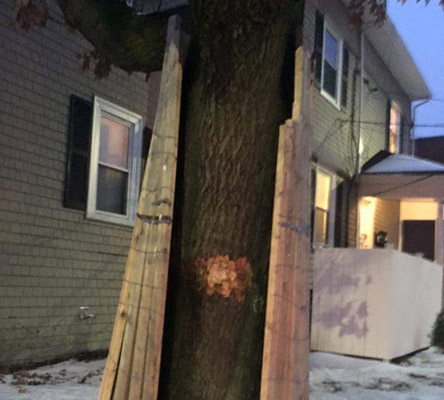 A correspondent forwards this photo of a newly gouged tree on Peaceable Street. He notes that whoever hacked at the tree first had to peel back the wooden boards the homeowner had placed there after a decade of attacks by a man in black who does everything he can to make trees die in the area surrounding the BPL's Brighton Center branch. Read more.

A crackdown on underage drinkers in Cleveland Circle has sent the fake-ID crowd outward in Brighton, forcing bars that want no part of them to step up their ID checking.

The news came too late for Porter Belly's, on Washington Street in Brighton Center, which found itself before the Boston Licensing Board this morning to explain why police snared two underage drinkers there one night in September - one of whom needed a ride down to District D-14 after he allegedly tried to evade a police detective asking to see his real ID, not the fake license in his wallet. Read more.

And to think that I saw it on Washington Street 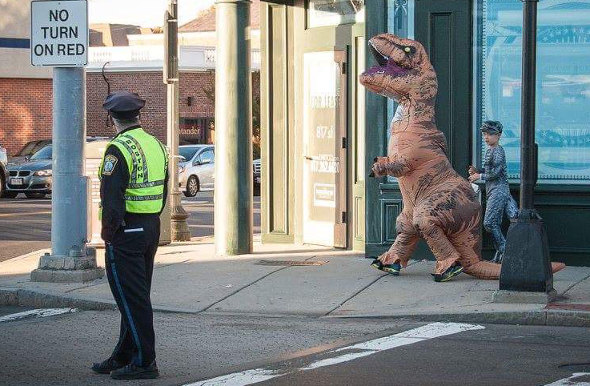 PlunkettPrime stayed well clear of the ravenous dinosaur out for a bite in Brighton Center. 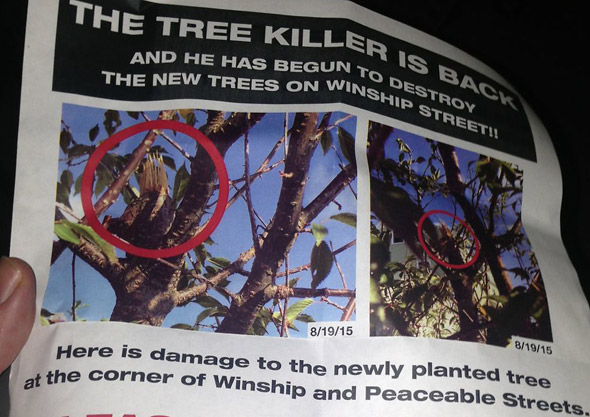 Joseph Rizza made bail on July 31 and was released, the Suffolk County Sheriff's Department reports. He is scheduled for trial on Aug. 26 in Brighton Municipal Court.

Fliers appeared on cars parked on Peaceable and Winship streets today: The tree ninja is back, and he's up to his old tricks - just a month after the city planted new trees there for the first time in years, and four months after alleged Brighton tree ninja Joseph Rizza was ordered held without bail after being arrested in a tree stakeout. Read more.

New trees in Brighton Center come with a plea for help

BirdMachine reports new trees have been planted along Winship Street in Brighton Center, for the first time in a long time, because that's one of the streets the Brighton tree ninja has targeted for more than a decade with a blade with which to cut up trees so that they would die. Read more. 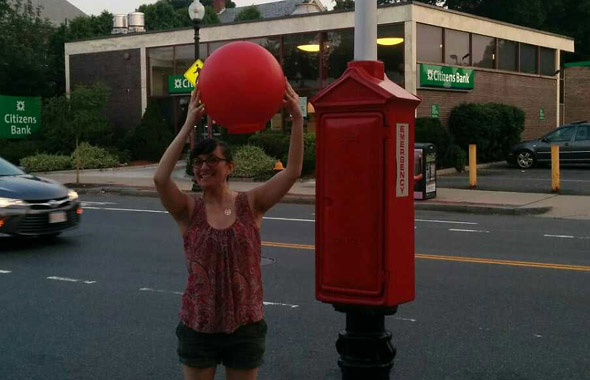 A concerned citizen and her photographer point out a fire box has lost its big red ball at Washington and Parsons streets in Brighton.

Earlier
A concerned citizen and her photographer point out a fallen sign. 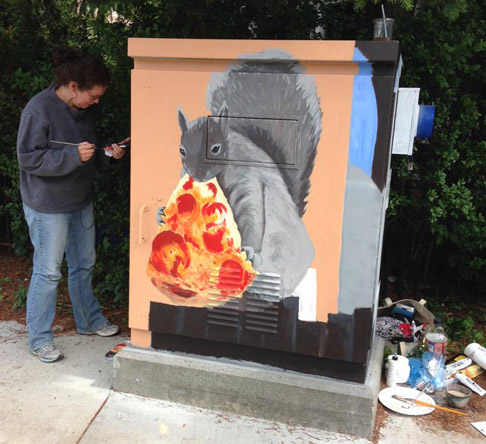 Captain Nemo has been following an artist's work in Brighton Center the past couple of days - specifically, at the corner of Washington and Foster. Fans of images of squirrels eating pizza would be correct in assuming they've seen this basic image before.

The Boston Art Commission pays $400 to local artists for each traffic control box they decorate.

Boston Police report arresting Joseph Rizza, 65, this morning after detectives say they caught him in the act of killing yet another Brighton Center tree - this time with a hammer.

He was charged with possession of a dangerous weapon and five counts of willful and malicious destruction of property, police say, adding they continue to investigate the deaths of trees in the neighborhood over the years.

A Brighton Center man who has been killing neighborhood trees for more than 10 years is being charged, again, with arborcide, this time along Winship Street and Academy Hill Road.

In a police report, an officer says he responded to a Winship Street backyard on March 11 to find several large trees "severely damaged:"

The bark on the trees has been hacked off and the tree interior damaged to the extent that removal will be necessitated.

The officer then journeyed to nearby Academy Hill Road:

What is it with Brighton Center? Yet another restaurant closing

Boston Restaurant Talk reports Mandy and Joe's, which has been open for 70 years at 328 Washington St., is closing forever on March 29.

Brighton barbecue and blues joint closing for good this month

Picture something like this instead of the Brighton Beer Garden.

The Cronin Group, which owns the Brighton Beer Garden on Market Street, tonight proposed tearing it down to make room for an apartment building of up to seven stories.

Michael Kineavy, the company's chief operating officer (and former aide to Tom Menino, shown at right), appeared before the Brighton Allston Improvement Association to ask its suggestions on the company's initial proposal, which showed 34 apartments in a seven-story building with commercial space on the ground floor, 24 parking spaces and a roof deck.

A man who dons a black ninja outfit and goes out at night with a long-handled blade is back on the prowl in Brighton again, slicing up trees to make them die. And now that he's killed all the young trees along one street, he's going after shrubs.

Residents of Peaceable and Winship streets have put up wanted posters, while police try to collect enough evidence to convince a judge that the local resident, who's been killing trees for years, is a menace who needs to be sent away for longer than brief spells in Bridgewater.

But the result could be formal requests for later hours for pizza places in the Fenway and in Brighton - as late as 3 a.m. for the Brighton Domino's.

University House of Pizza in the Fenway and Papa John's and Domino's in Brighton all had to explain this morning why they were open way past their licensed closing times at a hearing before the Boston Licensing Board.

Brighton has a tree ninja, who goes around at night sawing trees just enough to make them die

Mr. Miguez reports the guy has been going around Brighton for years, condemning trees to death:

Sometimes he uses an axe, other times a saw. My landlord says his favorite tactic is to take a claw-hammer and strip a circle of bark off the tree all the way around the trunk. This destroys the tree's ability to draw water up from the ground, and it eventually dies.

Boston Police report the woman, struck at Chestnut Hill Avenue and Washington Street around 6 p.m. yesterday, has died. The crash remains under investigation; no charges have been issued.