Armed robber lets gun slip out of his pants at Airport station, gets arrested, police say

Transit Police report arresting a man for armed robbery after his getaway was slowed when his gun fell out of his pants, letting his victim and a T worker catch up to and then grab and hold him until officers arrived. Read more.

The MBTA is reporting delays of up to 15 minutes on the Blue Line, because of a train that had to be taken out back and shot at Airport.

Trains died at Waban and Airport, commuters' rides they did thwart

Riders on the Blue Line and the Riverside branch of the Green Line had problems this morning when trains just refused to budge.

On the Blue Line, T forced to do manual switching, so riders can get to work without too much bitching 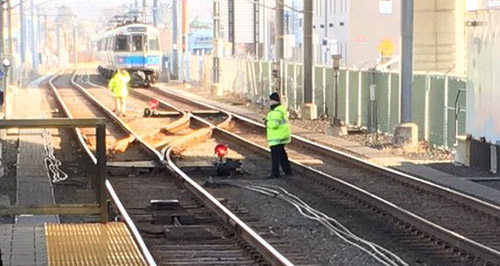 The T reports "minor" delays on the Blue Line due to a switch problem. Kate Donaghey watched workers manually operate a switch at Airport. She adds:

Train arrived northbound, pulled up a bit, they switched the tracks and the train came back Bowdoin bound. Waited about 12mins today.

Two of the four. Photo by Transit Police.

UPDATE, 12:10 p.m.: The MBTA reports three of the four have turned themselves in - they walked into Transit Police HQ just as Supt. Joseph O'Connor was briefing the media on the case. More to come.

Transit Police report a man and his 14-year-old daughter were beaten by four men on a Blue Line train around 8:30 p.m. on Sept. 18.

After repeatedly punching the man in the head and his daughter in the thigh, the four sauntered off the train at Airport, police say.

No problems on the Red Line this morning, but the Blue Line makes up for that

A man wound up on the tracks at Airport station around 8:30 p.m. on Thursday. The train operator managed to stop the train before hitting him. An MBTA spokesman declined to say how the man ended up on the tracks but said he was not seriously hurt (click to see a photo from the scene, forwarded by Heath - it's not gory, but could be disturbing).

Teens sought for trying to sell guns at a T stop

MBTA Transit Police have released photos of two guys they say approached somebody at the Bremen Street entrance to the Airport T stop on Dec.

It's one of those mornings on the T

Having sterilized all the poles, the T maintenance crew turned its attention to the trash cans

Fabulously Out There tweets workers were busy sterilizing trash receptacles at Airport station this morning:

Cool! I was just about to lick one!

Donald reports on an accident at the Airport stop involving a woman falling down the stairs and gouging open her knee on Sunday:

... After running to her and opening my carry on bag I pulled out a tee shirt to act as a tourniquet. I did not want to touch her wound with pressure as it was soon enough there was little spillage and I didn't want to infect an open wound. Her leg was OPEN and I almost got queasy. ...