Shortly before 7:25 p.m. on Tuesday, according to the Boston Police incident database. The database does not specify where on Beech, but some residents reported it was in the area of Grandview Street. Other residents reported hearing between six and nine shots. Read more.

A note to the glove idiot of Beech Street 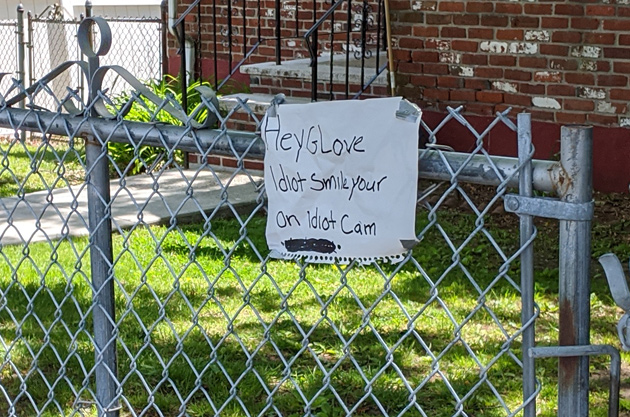 Somebody's had enough on Beech Street, just before Poplar in Roslindale (as of this afternoon, there were, in fact, a couple of gloves along the curb there).

Citizen complaint of the day: Masshole applying blush while barreling through a red light in Roslindale

An outraged citizen files a 311 complaint about people running the light at Poplar and Beech streets in Roslindale, in particular a woman in an SUV around 8:30 this morning: Read more.

A citizen irate about excessive hedging files a 311 complaint about a hedge run amok on Beech Street in Roslindale: Read more. 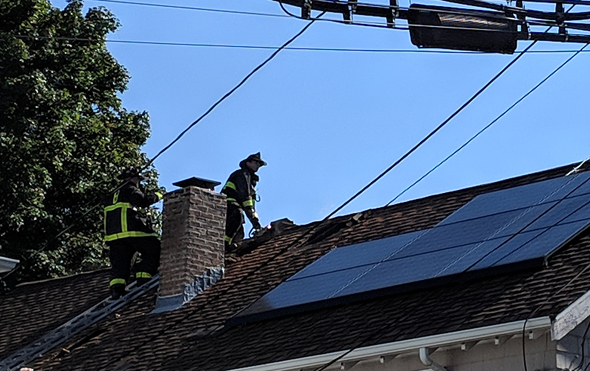 Firefighters in the attic. Photo by BFD.

A fire caused by an attic short circuit did an estimated $150,000 in damage to the house at 112 Beech St. the Boston Fire Department reports.

A family of three was displaced by the blaze, reported around 9:35 a.m. Nobody was home at the time and there were no injuries, the department says.

And somebody's got it bad on Beech Street in Roslindale.

Hey, Verizon: Send help immediately, she can't hold that thing up much longer! 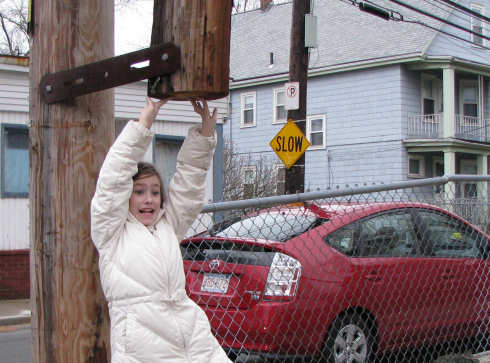 The kidlet struggles to keep holding up the telephone pole at Beech and June streets in Roslindale that the repair crew swore they'd be right back to remove.

Thanks to the cheap bastards who run our local phone and power monopolies, Roslindale and other neighborhoods are being overrun by "double poles." Rather than replace old utility poles, which would take actual work, Verizon and NStar just bolt or wire new poles to the old ones - sometimes in bizarre configurations in which parts of the old ones are cut away, leaving these weird stumpy things.

In 2004, Verizon actually agreed to a plan to ensure that by mid-2007, there would be no double poles older than 90 days anywhere in the entire state.

At first, it was easy to hold up the old pole: 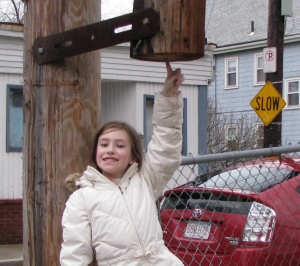