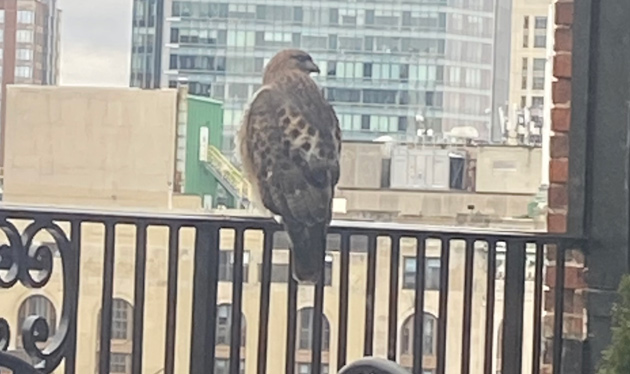 Dan snapped the hawk that's been using a fifth-floor railing at the Boston Athenaeum on Beacon Street as an observation post.

Ron Perry contemplated the statue in the Boston Athenaeum that shows Adam and Eve realizing they've just blown it. The statue overlooks the Granary Burying Ground.

OK, so Harvard Law School doesn't have a book bound in human skin, but the Boston Athenaeum does

Boston Magazine disabuses us of the notion that Harvard Law owns a human-skinned book, thanks to some research that showed the book is actually bound in sheepskin.

That still leaves two other books owned by Harvard - and the Boston Athenaeum's copy of "The Highwayman," by James Allen, which, its catalog says, was:

As the Boston Athenaeum continues to dry out from flooding caused by a burst pipe, officials hope to re-open early next week.

In a daily e-mail update to members of the private library on Beacon Hill, Director and Librarian Paula Matthews said workers discovered the source of the flooding was a burst iron sprinkler pipe above the ceiling of one of the library's reading rooms. Once repaired, the library will be able to turn its sprinkler and fire-alarm systems back on, with the goal of re-opening in time for a Tuesday-evening lecture.

He was raised as an American aristocrat. As the eldest grandson of Franklin Delano Roosevelt and Eleanor Roosevelt (niece of Teddy and 5th cousin to her husband) he’s twice a Roosevelt, a name which means wealth and status. With his sister, he moved into the White House at age three and became a child celebrity.

Wolff at the Door: A foray into the Boston Athenaeum

Posh library. Sanctuary for eminent Bostonians. Brahmin enclave. There has always been a mystique surrounding the Athenæum. Look inside the door with this review of Culture Club: the Curious History of the Boston Athenæum.