WBZ reports three people were charged with being excessively brawly as the nightclub in our new casino that's relatively close to the harbor closed early this morning - and a fourth person was taken into custody for his own good for being over-ethanoled.

New casino rakes in $16.8 million in first week of gambling

The Encore Boston Harbor casino made $16.8 million in gambling revenue between its opening June 23 and June 30, according to figures released today by the state Gaming Commission. Read more.

Citizen complaint of the day: Don't bet on getting anywhere fast on Maffa Way in Charlestown on a weekend night now 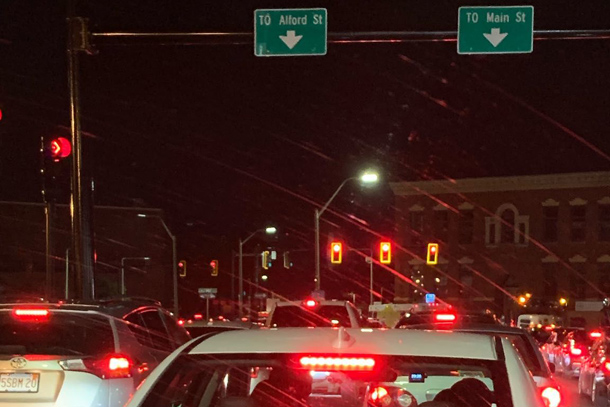 A disgusted citizen files a 311 complaint about the traffic on Maffa Way, off Sullivan Square, now that the casino is open in Everett: Read more.

Mayor Walsh's office announced tonight that Boston has signed a "Surrounding Community Agreement" that includes $68 million worth of payments to the city over the next 15 years and an effort to spend at least $20 million a year with Boston businesses over the same period.

The agreement marks the end of the city's increasingly futile court challenges to the Wynn casino on a parcel in neighboring Everett. Read more.

All bets are off: Boston goes to court to try to quash Everett casino, or, at least, get more money out of it

In a lawsuit filed today, Boston seeks to have the state's award of a casino license to Wynn for a site in Everett tossed out as illegal, charging the planned Everett casino will be built on a foundation of criminal acts and legal bungling that will destroy efforts to improve Sullivan Square and deny the city its rightful amount of mitigation money.

WBUR reports the mayor might look at trying to delay the vote if Suffolk Downs doesn't have a managing company now that Caesars is out.

A no vote on Nov. 5 would kill the casino proposal, which also needs the approval of the state gaming commission.

Referendum is everything for Suffolk Downs

It appears a certainty according to sources close to the mayor and Suffolk Downs officials that the long awaited Host Agreement between them will be signed and made public.
This announcement will be followed by the public release of Revere’s Host Agreement with Suffolk Downs which was signed last month.
The Host Agreements finished and agreed to will allow for the state mandated referendums to be set in both East Boston and Revere.
These referendums are looming for East Boston and Revere, and more so for Suffolk Downs, as the single most important part of the casino puzzle.
The referendums must pass by wide margins that come close to Everett’s recent successful referendum which passed by an astounding 86-14 margin with 5500 voters coming out to cast a ballot.
Without strong showings in East Boston and Revere, the Gaming Commission will be forced to take a much closer look at the socio-political realities in both those places and to begin making determinations about which cities and town really want a casino and which don’t.
Recent Boston mayoral candidate polling conducted by Suffolk University has revealed a much closer margin for those for and against in East Boston than had been imagined.
This sent shock waves throughout the Suffolk Downs planning and strategy division led by Chip Tuttle.

Something stinks in East Boston

John Antonellis is our guest writer on today's post. John has been a resident of Eagle Hill in East Boston for close to 15 years and a homeowner there for 12. He is the Lead Instructor at the Harvard Bridge Program, a worker education program for employees at Harvard University.

All the East Boston casino news you can use

They could call it Caesars at the Airport

Suffolk Downs has put up renderings and justifications for its proposed $1-billion resort hotel which, to the untrained eye, looks like something you'd expect to see at the airport, rather than as a destination.

Looks like the track and Mayor Menino will be fighting a proposal for Milford for the one eastern-Massachusetts gambling license. If successful, Suffolk Downs wants to install 4,000 to 5,000 slot machines, 200 table games and a poker room, along with "six fine dining concepts," food for those with less refined tastes (a buffet and food court) and 300 hotel rooms.

Promotional video - watch past the intro to be reassured that no, they're not planning to put it in Copley Square:

Bringing the battle against a Suffolk Downs casino to Revere

The Revere Journal reports on one man's campaign against the proposed Suffolk Downs casino, which would be mostly in East Boston, but enough in Revere that that city gets to vote on allowing it as well.